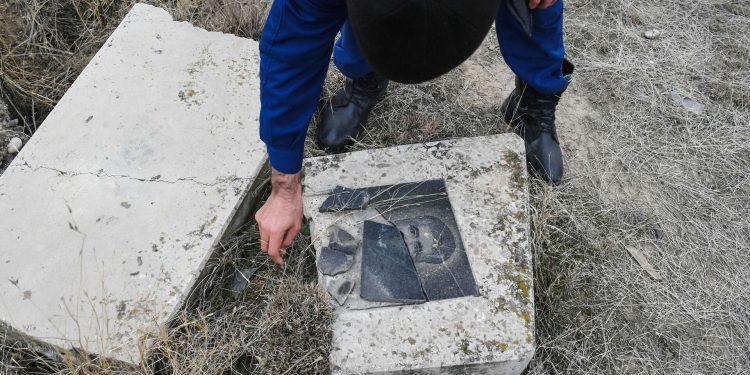 “We are entering the city of Lachin that Armenians left on August 25 according to the statement signed on November 10, 2020. You can see the results of destruction and atrocities here. Houses and cemeteries of Azerbaijanis were destroyed and burned. In the cemetery tombstones were dug out and stolen, graves were desecrated. I am walking carefully, because there are land mines planted in many places in the cemetery. The graves of Azerbaijanis have been dug out, gold crowns have been removed from the teeth of the dead,” the shocked photographer says in a video he recorded in Lachin.

Reza Deghati has seen a lot in his lifetime. He covered many wars and conflicts and human tragedies, but every report of his from the liberated Azerbaijani lands is shocking. We remember how emotional Deghati was as he was telling the world about the desecration of Natavan’s grave at the Imaren cemetery in Aghdam and the disappearance of the poetess’ remains. There is something diabolical in this unprecedented display of Armenian vandalism. Why the Armenians stole Natavan’s remains and where they took them is unknown to this day.

We were surprised to find honest information about Armenian vandalism in the US Department of State’s traditional International Religious Freedom Reports. This was the first time the State Department specifically called the Armenians vandals and listed their crimes. The report documented evidence of the systematic destruction of dozens of Azerbaijani cemeteries in Fizuli, Agdam, Zangilan, Kalbajar and Jabrayil districts, desecration of Azerbaijani graves and the “war on the dead”. “Graves were desecrated; in some instances, holes were dug out to rob graves, while other sites showed evidence of the destruction and exhumation by heavy construction equipment. The remains from Azerbaijani graves were exhumed and gold teeth removed, leaving skulls and bones strewn across Azerbaijani cemeteries or in some cases completely removed,” the report says.

This is all the more surprising because shortly before, the United States Commission on International Religious Freedom had published its report “On Destruction of Cemeteries”, which completely ignored the Armenian crimes. In response, the State Committee for Work with Religious Institutions of Azerbaijan issued a statement indicating that during the Armenian occupation more than 900 Azerbaijani cemeteries had been completely destroyed or the remains of the deceased had been removed from their graves, desecrated, and the tombstones had been taken away.

Azerbaijan kept bringing up the destruction of Azerbaijani cemeteries in the occupied territories throughout the years of occupation, but no one listened. The Armenians supposedly had won and winners are above judgment. And no one believed that the “most ancient” nation, which allegedly had laid the foundation of the human civilization, was capable of such evils. However, after the 44-day victorious war, when the occupation was ended, the handiwork of the Armenians was revealed to the world in all its naked horrific glory.

According to the Armenian blogger Roman Baghdasaryan, 70% of the tombstones are missing from the Azerbaijani cemeteries remaining in the occupied territories. The tombstones have been removed and sold in Armenia. Moreover, before they were sold, Armenian names were engraved on them. Baghdasaryan accused Kocharyan and Sargsyan of doing heinous things in the occupied territories for 25 years. He says all Azerbaijani cemeteries in the Fizuli, Jabrayil, Zangilan, Gubadli and Aghdam districts were desecrated. Some of the gravestones were destroyed by the occupants, some were taken to Armenia to be used in construction. For this reason, many Azerbaijanis who tried to visit the graves of their relatives and friends after the liberation of the territories could not find any.

So far, few cemeteries, or rather what the aggressor has left of them, are accessible to the public. When retreating, the Armenians usually mined the burial sites, and demining specialists have to work there first so that the formerly displaced people can find their relatives’ graves. The occupiers were not particularly ceremonious with the dead. Tombstones and marble slabs were actively used as building materials. Upon entering the liberated Lachin District on December 1, 2020, Azerbaijani soldiers found in the village of Pichenis a residential house with a staircase built from tombstones brought from the nearby Azerbaijani cemetery.

The Armenian nationalists were hardly ashamed of the fact that the whole world saw the results of their “creative” work. They never really hid their unhealthy proclivities, demonstrating their “exploits” on social media. Like this scumbag posing on an Azerbaijani grave. In the caption to the photo, the “hero” proudly says that it was taken in Jabrayil District, and that “a Turk named Samir Abbasov” rests in the grave.

The Armenians indeed did terrible things, seemingly beyond comprehension and logic. It is hard to understand people (if they are people at all) who dig through graves in search of gold dental crowns, scatter remains or steal bones for some reason. Why? Why did the Armenian nationalists destroy Azerbaijani cemeteries in Armenia and the formerly occupied territories with such dedication? It turns out there is an answer to this question. It can be found in the letter of 13-year-old Adelene Avagimyan from Karabakh to the President of Azerbaijan, written in 2011. To be more precise, it was written on her behalf by grown men who wanted to tug at the heartstrings of their audience. The letter said, “I heard from my grandfather that before the war, and even 50 or 100 years ago, when there were Azerbaijanis here, when they died, their remains were moved from Karabakh to be buried in their real homeland, because they knew that this was not their homeland, not their land. That’s why there are almost no Azerbaijani cemeteries here”….

This “touching” message makes it somewhat clearer why the cemeteries were targeted by the Armenian barbarians. The goal is the same: to prove that Azerbaijanis are supposedly foreign to Karabakh, so there are no graves. But the invaders made a big mistake by convincing themselves that these lands would never be liberated, so they were in no hurry to clean up after their crimes. This arrogance resulted in numerous documented facts of vandalism at the burial sites and that US State Department report. And there is more to come.

After his trip to Aghdam, political scientist Fuad Akhundov admitted in one of his interviews that the Armenians were right: Garegin Nzhdeh’s Tseghakronism cannot be compared to Italian fascism and German Nazism. Having visited the destroyed Aghdam cemetery, he agreed that neither Italian nor German fascists could have come up with such vandalism. “It would not have occurred to the Germans retreating from the Soviet forces to dig up graves and destroy them. 1,500 graves were destroyed and looted in Aghdam,” Akhundov told Interfax.

A Russian blogger visited the still-occupied Aghdam in 2008. The video he posted on social media captured, among other things, an Azerbaijani cemetery. The comments to the video say that this is the Garaghachi cemetery near Aghdam, one of the oldest cemeteries in the region.

The blogger is overwhelmed and embarrassed. He had not expected to see something like this. Almost all the graves are destroyed, only some of them have survived. It looks like he does not really understand where he is and what is going on here, so he is surprised that no one visits the graves on Parents’ Tuesday, and calls the mausoleum a “church”… But this is not so important. The most important thing is the documentary evidence of what has been done by the Armenian non-humans. Unfortunately, from 2008 until the liberation of Aghdam, according to eyewitnesses, the cemetery was destroyed almost completely, and even the sparse graves captured by the Russian blogger are no longer intact.

According to the report released by the Office of the Human Rights Commissioner of Azerbaijan, the Garaghachi cemetery is located 5 kilometers south of Aghdam. It is quite large, up to 3 kilometers long and up to 2 kilometers wide. Archaeological data show that the cemetery is 3,000 years old. The oldest surviving tombstones, more precisely, those that existed prior to the Armenian occupation, are dated to 1174. During the occupation the Armenians destroyed both the graves and the four mausoleums in the cemetery. By the way, you can see two of them, albeit half-destroyed, in that Russian blogger’s video from 2008.

We are not so naïve as to expect any kind of punishment for the Armenian side or at least outrage on the part of international organizations whose rules Armenia has violated. UNESCO, for example, showed no interest in Armenian vandalism during the occupation, and after Armenia’s defeat, the organization keeps turning a deaf ear to it.

Nor do we expect repentance from our neighbors, who do not even respect their own dead. On May 9 last year, war criminal Robert Kocharyan went to Yerablur, where he was attacked and cursed by the mother of a soldier killed in the 44-day war. According to the Armenian media, three days later, the cemetery workers discovered that unknown persons had burned the grave of that woman’s son and desecrated the photo of the deceased.

Is there anything left to say?