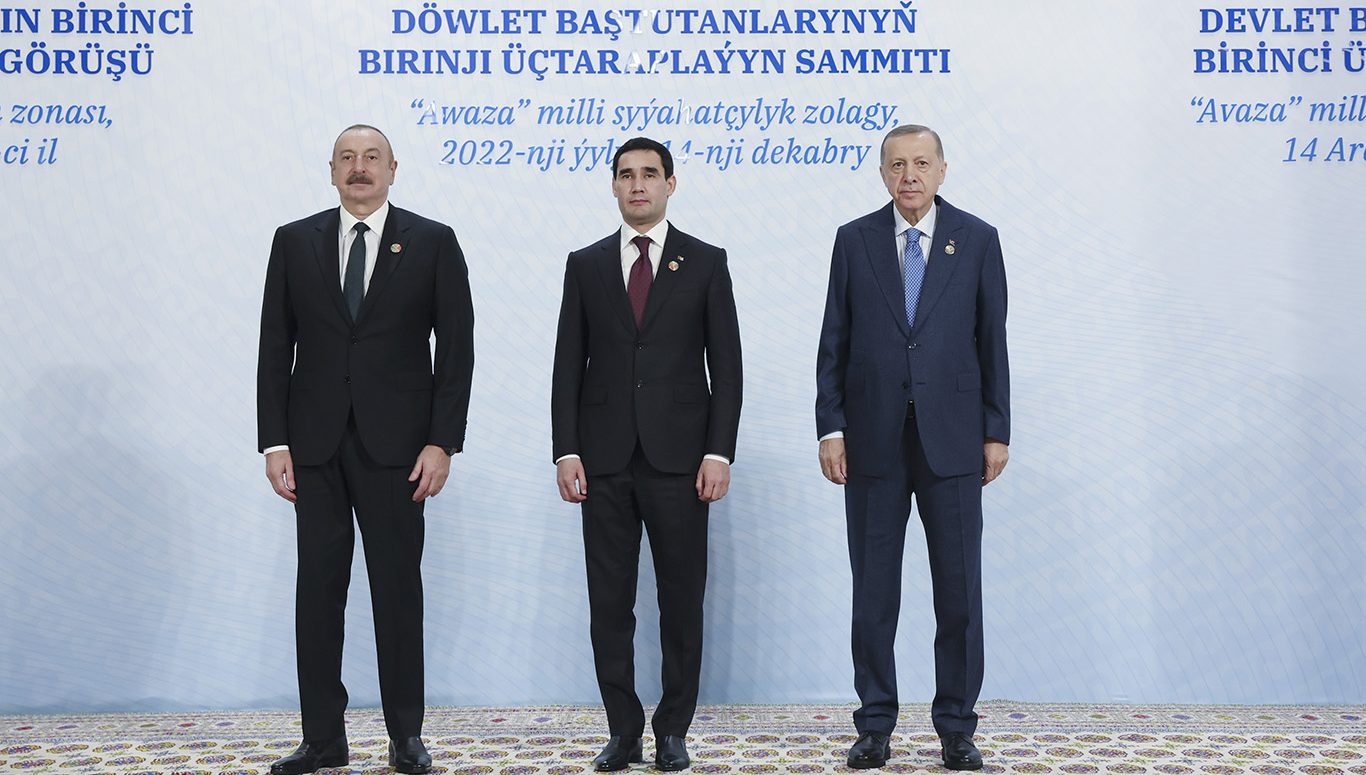 Under the shadow of the raging Ukraine conflict that has disrupted energy markets worldwide, the gas-rich Turkic Central Asia has emerged as a critical region for the energy-hungry world.

However, the predominantly Turkic-populated Central Asia – from Kazakhstan to Azerbaijan – played a crucial role in global geopolitics long before Russia attacked Ukraine on February 24. These Turkic nations – extending from China to the borders of Türkiye – were at the centre of what is known as the ‘Great Game’ of the 19th century, a fierce competition for dominance between the former Russian and British empires.

With both empires gone and their successor states not that powerful to dictate terms, the Central Asian republics are now turning to Türkiye as they seek to build a new mutually beneficial alliance – the empowered Organization of Turkic States (OTS).

Increasing ties between Central Asia and Türkiye, which has recently moved towards becoming a potential gas hub for Europe following the Ukraine conflict, might have crucial effects on the West’s energy supply, according to experts.

“Gas flow to Europe from Russia has decreased to very low levels. Europe needs to diversify its resources and buy gas from different sources,” says Emre Erturk, a prominent energy expert and Founder and Managing Director at CEEN Energy Information Services and Consultancy. “One of the most probable sources of gas that can reach Europe in the shortest time can come from countries located east of Türkiye,” Erturk tells TRT World, referring to states like Azerbaijan, Turkmenistan and Kazakhstan.

Transporting Central Asia’s gas to Europe through Türkiye is a long pending project, dating back to the 1990s. But the recent trilateral meeting between Turkmen, Turkish and Azerbaijani leaders in Turkmenistan’s Awaza city has shown this project is not a dream anymore.

“We now need to start working on transporting Turkmen natural gas to Western markets. We are ready to cooperate with our Turkmen and Azerbaijani brothers in the ‘Dostluq’ (Friendship) Field in the Caspian Sea,” Turkish President Recep Tayyip Erdogan said after the summit last week.

Due to a maritime rights dispute, Turkmenistan and Azerbaijan could not reach an agreement earlier to build a pipeline to carry Turkmen gas to Azerbaijan through the Caspian and then to Türkiye and Europe.

But last year, the two Turkic states reached a landmark deal that allows them to produce gas in wells across the disputed gas area, which they now call the Dostluq Field. Turkmenistan has the world’s second biggest gas field in Galkynysh located in its southeastern Mary province.

The realisation of this joint production between Baku and Ashgabat has increased hopes that Turkmen gas could be carried to Azerbaijan via a pipeline with a Caspian crossing, according to Erturk. Then, he adds, it can flow through TANAP (Türkiye-Azerbaijan Natural Gas Pipeline) to Türkiye and Europe. TANAP is connected with the Trans-Adriatic Pipeline (TAP), which carries gas to Europe from Türkiye.

“As a result, the recent energy negotiations between Türkiye, Azerbaijan and Turkmenistan are of great importance for both Ankara’s and Europe’s energy supply security,” Erturk says.

Matthew Bryza, a former US ambassador to Azerbaijan who had been a leading voice in the formation of Washington’s Central Asia policy in the past, also thinks the recent meeting can have acute effects. “They agreed on something that includes moving Turkmenistan’s natural gas across the Caspian Sea to Azerbaijan,” Bryza tells TRT World. And from Azerbaijan through Türkiye, Turkmen gas could reach Europe, he says.

“That’s something which has never been agreed before,” says Bryza, indicating the changing mood across the Turkic world. Due partly to Russian pressure, he adds that Turkmenistan hesitated to join Türkiye and Azerbaijan on the plan to export its gas to Europe.

Before the recent trilateral meeting, last month, Türkiye, Kazakhstan and Azerbaijan also came together along with Georgia, a Caucasian state and one of the co-host states of the Baku-Ceyhan-Tbilisi pipeline (BTC). In the meeting, the three Turkic states discussed critical issues, like how to carry the Turkic world’s gas to the West.

Due to the Ukraine conflict and increasing cooperation among Turkic states, Kazakhstan has reportedly shown growing interest in carrying its oil through non-Russian routes, like the BTC, to Europe.

Like Turkmenistan, Kazakhstan also aims to strengthen the Caspian crossing for both transportation and gas exportation purposes. “Our President [Kassym-Jomart Tokayev] has always emphasised that the Caspian crossing using the Middle Corridor [which extends from China to Türkiye] is one of our national priorities,” Abzal Saparbekuly, the former Kazakh ambassador to Türkiye, tells TRT World.

“We are very much interested in opening European Union markets without Russia through Azerbaijan, through Türkiye, our key partner in this region,” says Zhanibek Baidulla, Managing Partner of Center for Strategic Initiatives, a consulting company working with different energy firms, including state-funded enterprises in Kazakhstan.

Türkiye is now becoming “a very big energy hub in the region. And, of course, Kazakhstan is very much interested in becoming part of that major project,” Baidulla tells TRT World.

On Friday, in Silivri, a European district of Istanbul, Erdogan inaugurated the continent’s largest natural gas storage, demonstrating another clear step toward Türkiye’s aim to be a gas hub for the West.

The past several weeks have witnessed not only the two energy-focussed trilateral meetings in Turkmenistan and Kazakhstan but also the summit of the Organization of Turkic States (OTS) in Uzbekistan’s Samarkand, demonstrating a trend of strengthening ties among Turkic-speaking member countries, which include Türkiye, Kazakhstan, Uzbekistan, Kyrgyzstan and Azerbaijan.

Last year, the Turkic Council, founded in 2009, changed its name to the Organization of Turkic States, signalling that political connectedness between Central Asia and Türkiye is taking root and moving forward to rediscover its historical path across Eurasia.

Turkmenistan has been an observer state in the OTS, like Hungary, a central European country, which has recently shown a strong willingness to discover its Turkic roots. The Central Asian state also signalled that it would join the political bloc soon, leading to the group’s increasing appeal in Central Asia.

“The Organization of Turkic States is kind of like the United Nations for the Turkic world,” says Uli Schamiloglu, professor and chair of the Department of Kazakh Language and Turkic Studies at Nazarbayev University in Kazakhstan.

In 2006, former Kazakh President Nur Sultan Nazarbayev was the first politician to propose forming the Turkic Council. Kazakhstan, like Türkiye, has long been a fierce defender of the Turkic alliance.

Experts like Schamiloglu point out that Turkic cooperation is more about peaceful integration projects than posing any threat to Russia. All of the Central Asian Turkic states were former Soviet republics, being under Moscow’s rule.

“People like to say that this is not designed against anybody. On the contrary, this is about promoting friendship, integration, cultural exchange and economic cooperation in the Turkic world,” Schamiloglu tells TRT World.

Omer Kocaman, the deputy secretary general of the OTS, also thinks similarly. “We are a very young organisation, and we are also a good-natured organisation,” Kocaman tells TRT World.

“We share what we do on our website and social media. We have no secret agenda,” Kocaman says. The OTS activities will contribute to regional peace and economic development as well as have a positive effect on stabilising Afghanistan, says the top OTS official.

“As a result, no one has to fear from our organisation’s activities,” he says. “We are not against anyone, but we also fear from no one,” he adds.