If something clicks in a European’s head, run for your life!

In recent weeks, Russian media and social media have been overflowing with apocalyptic prophesies of the hardships awaiting Europe and the United States, who had the nerve not only to impose economic sanctions on Russia, but also to help Ukraine survive the war. 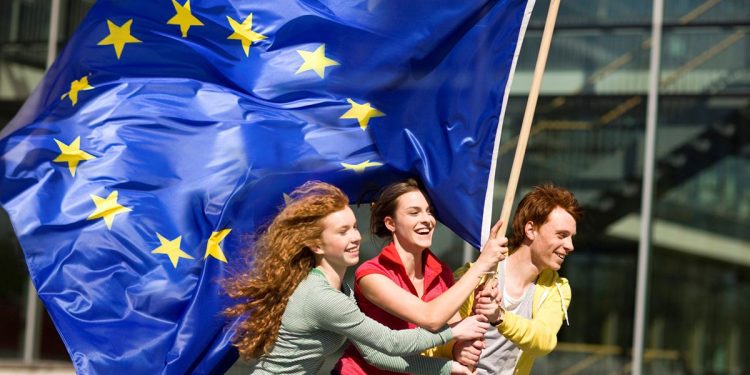 “Starving to death in the well-fed West!”

The main object of Russian media’s sneers and social media users’ jibes is the economic situation in Europe and America, which has worsened considerably because of the latest gas price hike. Propagandists spare no grim colors to paint the horror in the shoppers’ eyes at the prices in European supermarkets and especially at the chilling pictures of the coming winter, when poor Europeans will have to heat their apartments with little more than dung bricks.

In the absence of convincing arguments, any little thing will do. A line at a gas station? Great. A few students’ protesting for normalization of relations with Russia? Excellent! A pensioner squabbling at a store because of higher bread prices? Here comes the headline “Starving to death in the well-fed West!”

“This is only the beginning!” Russian propagandists rub their hands gleefully as they wait impatiently for the winter, looking forward to Miller closing the gas valve to Europe and opening the second one, the one that leads to China and India, dreaming how splendid everything will be in Asia and how awful it will be in ungrateful Europe.

So awful, in fact, that those who miraculously survive will come crawling back to those they snubbed, on their hands and knees.

Arguing with propagandists is an exercise in futility. That is why I will immediately agree: yes, all these problems do exist, and the gas deficit is quite expected, oil prices are rising, inflation is galloping, food prices are climbing, and the salaries are already inadequate.

Still, Russians are not being told the most important thing: despite all of this, Europeans are patiently enduring adversity, they are not taking to the streets or expecting their governments to resign, and, most unpleasant of all, they are not demanding that normal relations with Russia be restored.

Some would probably like to explain this by a mix of naivety and indifference, which is often attributed to Western liberals. But the simple truth is that, after what Russia did in Ukraine, Europeans not only realized—they felt what was at stake.

And therein lies another mistake of the Russian leadership: it underestimated the European character. A mistake that could prove fatal.

We all grew up in the Soviet Union, a real realm of domestic aggression, without exaggeration. Nowhere else in the world was the cult of violence and thuggish domestic aggression as strong as in the Soviet Union. This, unfortunately, could not but leave scars on the mutilated mindset of post-Soviet nations and distort their view of the outside world.

To a Soviet person, a street hooligan has always been stronger than an intellectual with a briefcase. An aggressive type picking a fight in a restaurant was always seen as a “real man”, as opposed to a nonconfrontational person who preferred not to get into dumb fights.

According to Soviet psychology, nurtured by the thieves’ code and street culture, anyone who does not punch the opponent in the face, but tries to solve the conflict peacefully, is a total dupe. So, from this point of view Europeans are classical schmucks, punching bags, weaklings, who can be broken without much effort. And since restraint and unwillingness to get into a conflict over nothing is perceived as weakness, any Russian or Caucasian tough talker can easily beat any European.

Obviously, in Russia these “notions” are not only formed, so to speak, in the natural environment, they are also hammered into the heads of citizens by the official propaganda.

“What can they even do? They’re going to come crawling back!”, “As soon as things get tough, they’ll overthrow their governments!”, “They’re all homosexuals, they’re going to break right away!” shouted those who on February 23, 2022 had no doubt that in three days’ time they would be drinking champagne in a restaurant on Kyiv’s Khreshchatyk…

What does that tell us?

The wrath of “effeminate Aussies”

It tells us that these people not only know nothing of history, they are not interested in it as such. For they live in an imaginary world of their own, where the sky is their limit, where everyone is afraid of them, and where they “can do it again”.

This is roughly how the Lebanese reasoned about twenty years ago when they carried out pogroms in pastoral Australia.

“What can these Aussies do?” thought the ungrateful wretches, who had been welcomed, accommodated and taken care of half the world away from their homeland. “They’re all sissies, you pick on them, and instead of fighting back, they just step aside. Cowards, that’s one word for them!”

The story ended with the “effeminate Aussies” organizing themselves through social media and giving their thuggish guests a thrashing so good that since then Australia has been quiet, with its multi-ethnic people living in peace and harmony.

Many probably do not know that in America, with its full complement of various ethnic gangs, from Black and Russian to the Japanese Yakuza and the Chinese Triads, the strongest and most dangerous is the Aryan Brotherhood, white Americans, descendants of the British, Irish, Germans, Dutch, who strike terror into all ethnic groups.

There is something that those who ordered a banquet in Kyiv on March 1 would do well to remember: there is nothing scarier than a nice person’s anger. This is exactly how it goes. A nice person holds back for a long time, refusing to engage in a conflict, calling on everybody “to be friends”.

But one day something clicks in their head, and then you’d better run for your life…

The West has lived in peace and prosperity for 75 years. It obviously has a lot to lose. But one has to know nothing about life or to have never seen the Germans play soccer, the English play rugby, and the Americans play hockey to consider them “spineless” nations that can be easily bent and broken.

The West is at the stage where European stubbornness and character come into play. That is, the same willpower and diligence that allowed these nations, lacking any significant natural resources, to become world leaders.

Russian ideologues, who believed that the true measure of manhood and fortitude is a restaurant fight, have underestimated Europeans and their willingness to endure adversity if they know what it is for. Perseverance, intelligence, and the highest level of discipline are what will help the West defeat Russia in the “war of nerves”.

Yes, Europe will be losing tactically. It will indeed go cold and possibly hungry in winter. But nations that have survived two of history’s most destructive world wars and several plague pandemics are no strangers to hardship. Historical memory will tell them how to act in this situation.

When I was a young journalist, I traveled quite a lot in the conflict hot spots, including Chechnya in the first war. Many of my fellow journalists from the former Soviet Union were there, too, all of them, as a rule, reckless and brave people.

But there was one Frenchman, named Luc (I don’t remember his last name). And what this guy was doing there was pure madness. He constantly crossed the front line, wandered through the woods with Chechen fighters for months, slept in the trenches…

He was a completely harmless, smiley, and nonconfrontational bespectacled man. But I had never met a braver man than Luc.

This is for those who still believe that they “will soon come crawling back to beg for mercy”.

They will not crawl, they will come.

They will not beg, they will demand.

Not mercy, but justice.

As is the winners’ right.