Ilham Aliyev responded to Pashinyan’s proposal: “This is manipulation”

Therefore, we need to have a very clear position from Armenian government about their agenda. And I said recently, if they want peace we want peace, if they do not want peace, well, it is their choice. 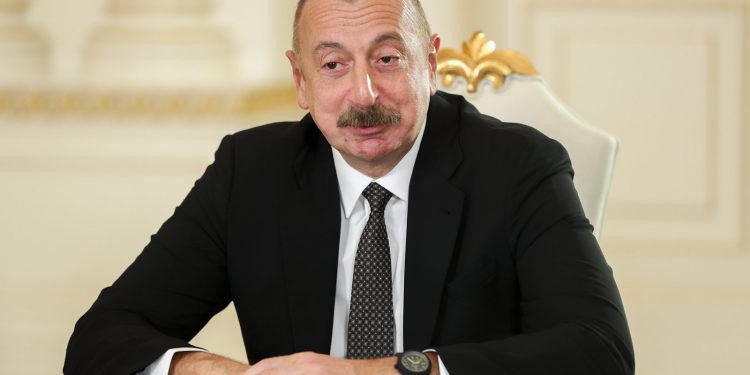 “You mentioned your visit to Armenia and that you got a message from Armenian leadership about peace. We have heard these messages during all the years of occupation, saying that they want peace. And they were not sincere. We, too, wanted peace but we also wanted our lands back. They wanted peace without giving the lands back. This is the difference. And we had to resolve the conflict by force and then by political means. Now, when they talk about peace, I think it is a kind of manipulation, because if they really wanted peace they would have responded to our proposal. It was us who made a proposal to start negotiations on peace agreement right after the war ended. And that was probably one of the unique cases in the world history. We are the country which had been under occupation for so many years, which restored justice by force, and after the enemy was defeated and thrown out from our territories, we offered peace. Despite all the devastations, destructions Armenians committed on our territory, and sufferings of Azerbaijanis, we offered peace,” President of Azerbaijan Ilham Aliyev said at the meeting with the European Union delegation led by Special Envoy of the European Union for the Eastern Partnership Dirk Schuebel, reports the official website of the head of state.

Further, the President voiced the Azerbaijan’s firm stance: “We offered a kind of framework of the well-known five principles, it was us who advocated for establishing a commissions on delimitation, it was us who was trying to find a ground for normalization of relations. Armenia was very reluctant in the first phase of the process. Now, they talk about peace. But what do they mean by peace? We do not actually understand. Because our position is very clear. It has been articulated many times publicly and also in my contacts with the leaders of European Commission, United States, Russia, the countries which have been involved in the process of normalization that we need to have two tracks: Armenian-Azerbaijani normalization process and also issues related to Armenian minority in Azerbaijan, in Karabakh with respect to their rights and security.

“Just yesterday, I had a phone call with Secretary of State Blinken and once again we talked about that. We have full understanding that there must be two tracks. And they should not be mixed up. But statements from Armenia are very controversial. They say they recognize our territorial integrity and sovereignty. The not only say it but they signed under that in Prague and in Sochi.

“That means sovereignty over all of our territory. We all understand what sovereignty means. At the same time, they want to incorporate issues related to Armenian minority in Azerbaijan into our peace agreement. It will not work. It is not possible. And we will not agree on that. Therefore, we need to have a very clear position from Armenian government about their agenda. And I said recently, if they want peace we want peace, if they do not want peace, well, it is their choice. We did not have peace for 30 years, and what was the end of the story Armenia should not forget.”