Ilham Aliyev’s words should be taken as a warning

Ilham Aliyev also pointed out that the trilateral statement of November 10, 2020 was in fact an act of capitulation on Armenia's part. As the defeated side in the war, Armenia undertook the commitments clearly specified in that document. 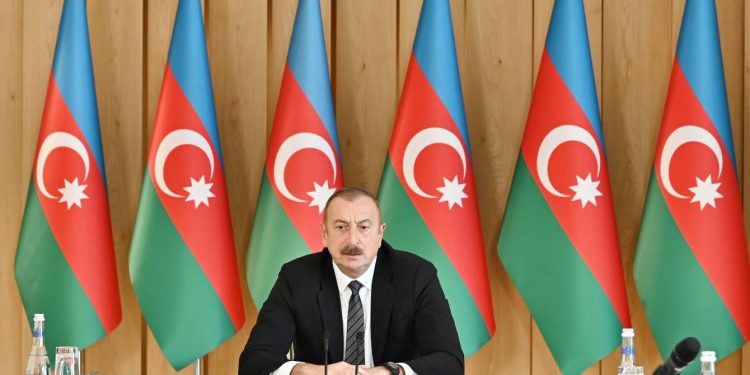 “Recently, the Armenian leadership has once again started talking about some kind of status for Karabakh. However, when the war ended and Armenia was forced to sign the act of capitulation, there was a verbal agreement between us, the leaders of Azerbaijan, Russia and Armenia, that the issue of status would not be raised. Armenia respected this for some time. But recently their Prime Minister and Foreign Minister have started talking about the status… This is very dangerous for Armenia because we too can demand a status for Zangezur, which was torn from us in 1920. We are not bringing that up, although we can, and then we will see what the outcome will be,” President of Azerbaijan Ilham Aliyev said at the meeting on the results of the first six months of the year.

Commenting on the President’s statement, diplomat Farid Shafiyev, director of the Center of Analysis of International Relations, pointed out that after Pashinyan said that Armenians should “lower the bar” of their demands on Karabakh, internal political pressure began to build up in Armenia, which was most likely initiated by external players. And after this, Pashinyan’s team began to push the issue of status once again.

“The Armenian Ministry of Foreign Affairs in particular has been making serious accusations and claims. The statements of the Armenian side at international forums and at the UN are very aggressive and radical. This does not sound like someone preparing for peace. On the contrary, they keep making territorial claims to Azerbaijan’s lands. And when Nikol Pashinyan says that they recognized the territorial integrity of the Republic of Azerbaijan in 1992, it is unclear why Yerevan’s official representative to the UN is spreading statements, including the recent one that ‘Nagorno-Karabakh became an independent state in 1991.’ It appears that they challenge Pashinyan’s statement that Armenia recognized Azerbaijan’s territorial integrity long time ago,” Shafiyev said.

That is, according to Mr. Shafiyev, the rhetoric remains unchanged and it keeps being repeated. Will this position of Yerevan change now? He doubts it. There are forces both inside and outside Armenia that condone this narrative and do not want the conflict to be settled for good and the country’s relations with Azerbaijan to be mended.

Meanwhile, Ilham Aliyev also pointed out that the trilateral statement of November 10, 2020 was in fact an act of capitulation on Armenia’s part. As the defeated side in the war, Armenia undertook the commitments clearly specified in that document.

The head of state said that one of them is the withdrawal of Armenian armed forces from Karabakh: “This issue has not been resolved to this day. We have repeatedly brought it up, but Armenia keeps stalling. We also raised this issue before the Russian military leadership and several months ago a high ranking official of the Russian Defense Ministry promised our Ministry of Defense during his visit to Azerbaijan that Armenian armed forces would be withdrawn from Karabakh by June. It is the middle of July now, but the issue remains unresolved. Armenia is not honoring this commitment, in contravention of the November 10 statement. The Russian peacekeepers—the Russian side also signed the November 10 statement—are not forcing Armenia to do it either. Of course, the situation is untenable. Any presence of Armenian armed formations in the territory of Azerbaijan is absolutely unacceptable. We are the winner country, we have restored our territorial integrity. If Armenia does not want to withdraw its armed forces from Azerbaijan, they should tell us openly, and we will know what to do. What will our response be? Perhaps now is not the right time to talk about it. But this is a gross violation of the Statement of November 10.”

President Aliyev’s words should be taken as a publicly issued warning, political scientist and member of the Milli Majlis Rasim Musabekov believes.

According to him, this warning is addressed to both the Armenian side and the command of the Russian peacekeepers. The trilateral statement clearly says that no Armenian military should remain in Azerbaijan’s territory.

“And it makes no difference whether these are people who have been sent there by conscription (allegedly, Armenia is not going to do that anymore) or contract soldiers recruited at the expense of the Armenian Ministry of Defense, either from Armenia proper or from the local Karabakh Armenians, it does not matter. Whatever it is, it means illegal presence of Armenian armed forces in the territory of Azerbaijan,” he said.

Musabekov added that the warning was made publicly, meaning that if it is not heard and interpreted correctly, Azerbaijan will get the chance to show by force the unacceptability of presence of Armenian armed forces in the territory of Azerbaijan.

“We know absolutely all of their locations. Azerbaijan can, even without making direct contact, use unmanned aerial vehicles or other military instruments to carry out pinpoint and very painful strikes on the remnants of the Armenian armed forces in Azerbaijan’s territory. But this is unlikely to bring peace and long-term stability to the region. So, hopefully, both the Russian military command and the political and military leadership of Armenia will make the right conclusions for themselves,” Musabekov summed up.

Another matter the President touched upon in his speech was the expectations from the meeting of the Foreign Ministers of Azerbaijan and Armenia.

“This is the first one-on-one meeting between the ministers, and we look forward to the meeting producing results. I have had several meetings with the Prime Minister of Armenia, representatives of Azerbaijan and Armenia have met, but there has been no bilateral meeting between the foreign ministers, this will be the first one. The issues to be discussed are already on the negotiating table. I think that a good outcome of this meeting could be the Armenian side setting up its own working group, because the Azerbaijani side has already formed a working group to draft a peace treaty. The members of the group have been appointed. Armenia has yet to take this step,” the head of state said.

Ilham Aliyev stressed that the results of this meeting would determine Azerbaijan’s further moves.

Commenting on this, political scientist, former diplomat and professor at Western Caspian University Fikret Sadikhov said that our foreign policy in the post-conflict period has been quite stable, principled and consistent. Our goal is to create a stable peace in the South Caucasus region, to achieve security and peaceful coexistence.

“I believe it was in this vein that the talks between the foreign ministers of Azerbaijan and Armenia took place in Tbilisi, and we certainly hope that Yerevan will take a reasonable position on this issue, instead of putting forward some new mythical ideas that clash with the need to create a stable and secure region.

“Unfortunately, various appeals and slogans concerning the status of Karabakh are being voiced in Yerevan again. Once again, they are making territorial claims against us. To the five principles we put forward, they add a sixth one, allegedly pertaining to the rights of ethnic Armenians in our Karabakh. All this, of course, is detrimental to the process and runs counter to the idea of sustainable peace in the region,” Sadikhov said.

He reminded that Ilham Aliyev said very clearly that we have more reasonable claims to Armenia regarding the corridor to the Nakhchivan Autonomous Republic, which they are reluctant to open. They keep stalling and creating problems.

“But we can, and we have every reason to, demand the return of the Zangezur region, which was torn away from Azerbaijan in 1920. Yerevan must not forget that. Our present stance is more than principled, and this principled stance absolutely does not contradict the conditions we want to create in this region.

“We will of course pursue peace in any way possible, both diplomatically and politically, but if there are artificially manufactured problems involving ‘status’, territorial claims, attempts to block the Zangezur corridor, I believe Azerbaijan can take more substantial measures against Armenia. We will be forced to, because there will be no other instruments left to use. These will be specific preemptive actions, which may make the ruling circles in Yerevan see reason,” Sadikhov concluded.