In Brussels, Armenia and Azerbaijan make progress in peace talks

These developments are not welcome by revanchist forces in Armenia, separatist groups in Azerbaijani Karabakh, or, to some extent, by Russia. 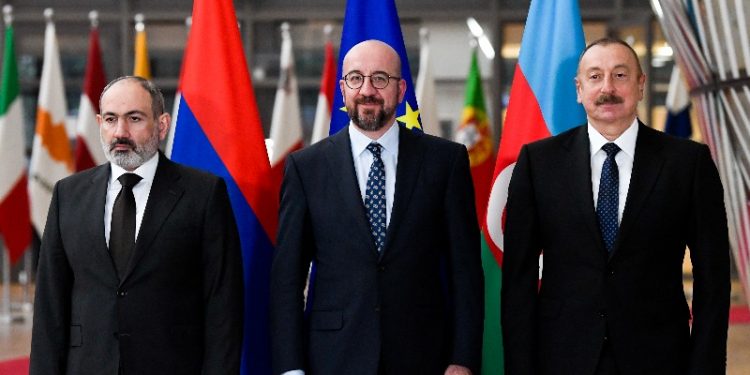 On April 6, Azerbaijan’s President Ilham Aliyev and Armenia’s Prime Minister Nikol Pashinian, met in Brussels—their first and, so far, only physical meeting this year. The summit, organized by the European Union and mediated by European Council President Charles Michel, was the third EU-arbitrated discussion of the Armenian and Azerbaijani leaders over the last four months (the sides previously met in Brussels on December 14 and held an online summit on February 4) (Consilium.europa.eu, April 6). It was also the first time the leaders of Armenia and Azerbaijan had paid a visit to Brussels for the sole purpose of negotiating about their dispute. Hence, the rendezvous was of great symbolic as well as political significance, marking the growing role of the EU in the Armenian-Azerbaijani peace process and offering a viable alternative to Moscow’s involvement.

The four-hour talks resulted in the announcement of two critical decisions. First, Aliyev and Pashinian agreed to convene a bilateral commission to handle the delimitation and demarcation of their countries’ interstate border by the end of April. Although Baku and Yerevan had previously approved this during their Russia-mediated summit on November 26, they had failed to establish the commission by the end of 2021, as Russian President Vladimir Putin declared would happen (see EDM, December 1, 2021). Optimism exists in the region that this time it will be possible.

“That commission will have a double mandate, the first one relates to the main delimitation works, and the second one is to ensure security and stability along the border,” Pashinian said in a cabinet meeting on April 7 (Armenpress.am, April 7). According to the Armenian prime minister, the two South Caucasus republics will also exchange territories that de jure belong to the opposite side, in an apparent reference to seven villages of Azerbaijan that are currently under Armenian control and one Armenian village under Azerbaijani control.

The Brussels summit additionally, as President Michel put it, launched preparations for an Armenian-Azerbaijani peace treaty (APA, April 7). Specifically, the foreign ministers of the two countries were tasked with initiating talks and contacts in this direction. A week later, the two sides took their first major step: On April 11, the foreign ministers of Armenia and Azerbaijan, for the first time in years, spoke on the phone, without any third-party arbitration. According to the Azerbaijani Ministry of Foreign Affairs, both officials “had an exchange of views about the work on the preparation of a future peace treaty, convening of a Joint Border Commission, as well as the humanitarian issues” (Mfa.gov.az, April 11).

In early March, Azerbaijan, through mediators, submitted a proposal containing fundamental principles for normalizing relations with Armenia (Mfa.gov.az, March 14). The five principles cover the mutual recognition of each other’s territorial integrity and inviolability of their internationally recognized borders; mutual confirmation of the absence of territorial claims against each other and acceptance of legally binding obligations not to raise such claims in the future; as well as commitments to refrain from acts that undermine the other side’s security and from threats to use force. Furthermore, the proposal includes the reaffirmation of the mutual agreements reached after the 2020 Second Karabakh War: the delimitation and demarcation of state borders, establishment of diplomatic relations, unblocking of transportation and other communications links, and establishment of cooperation in other areas of mutual interest.

Yerevan has positively responded to this proposal but added that it does not encompass all the issues in their bilateral relations. “With our response conveyed to the OSCE [Organization for Security and Cooperation in Europe’s] Minsk Group Co-Chairmanship we have completed that agenda and thus, are ready [for] the launch of peace talks on this basis” Pashinian said, stressing, “This response means that the principle of mutual recognition of territorial integrity and inviolability of borders is acceptable for Armenia” (Armenpress.am, March 31). According to him, the peace agenda should also include “The security guarantees of the people of Nagorno [sic] Karabakh, the protection of their rights and freedoms, as well as the clarification of the final status of Nagorno Karabakh” (Armenpress.am, April 7).

Brussels is helping ensure the implementation of the agreements Aliyev and Pashinian reached on April 6 (Twitter.com/ToivoKlaar, April 12). But some key issues stayed off the agenda of the EU-mediated talks and remain in the exclusive sphere of Russia’s engagement—first and foremost, the situation in the part of Azerbaijan’s Karabakh region that is temporarily under the peacekeeping mission of the Russian Federation. In the wake of their meeting, Aliyev and Pashinian notably did not touch upon the March 2022 border clashes in this territory or on Baku’s demands for the withdrawal of the Armenian troops from Karabakh, in accordance with the trilateral statement of November 10, 2020, which concluded the Second Karabakh War (see EDM, March 16, 29). In his April 7 cabinet meeting, Pashinian admitted it is more reasonable to discuss the situation in Karabakh in the Russia-mediated format, as Russia’s peacekeeping mission is on the ground (Armenpress.am, April 7).

These developments are not welcome by revanchist forces in Armenia, separatist groups in Azerbaijani Karabakh, or, to some extent, by Russia. Three days after the Brussels summit, on April 9, in his meeting with Armenia’s Foreign Minister Ararat Mirzoian in Moscow, Russian Foreign Minister Sergei Lavrov clearly expressed his displeasure toward the West’s refusal to cooperate with Moscow in the Armenian-Azerbaijani peace process. “Our so-called French-American partners, in an attempt to cancel everything connected with Russia in a Russian-phobic madness, also canceled the OSCE Minsk Group Co-Chairs, declaring that they would not communicate with us in that format,” Lavrov said (1lurer.am, April 9). He did, however, express support for Baku and Yerevan’s peace efforts and called for the implementation of the post-war trilateral agreements.

Revanchist circles in Armenia and separatist groups in Karabakh feel threatened by the prospect of Yerevan formally recognizing Karabakh as part of Azerbaijan. Therefore, they try to prevent this by all means (Azatutyun.am, April 12). A referendum on becoming part of Russia might be one such response for some Karabakh Armenians. For example, Haik Khanumian, the Karabakh “minister” for local government and public infrastructures tried to justify this attempt: “The Republic of Armenia used to be the guarantor of our security, and in essence it cannot perform that function anymore” (Mirror Spectator, April 5). Azerbaijani media frequently reports on often-violent provocations by separatist groups in Karabakh that could lead to further escalation (Caliber.az, April 9).

Baku and Yerevan need to show strong political will to overcome such challenges in order to realize the ambitious goals they have undertaken in Brussels. The arbitration role of the European Union in this process is critical but will have to complement Russia’s mediation; otherwise, the Armenian-Azerbaijani march toward peace could fall victim to the broader Russia-West standoff.