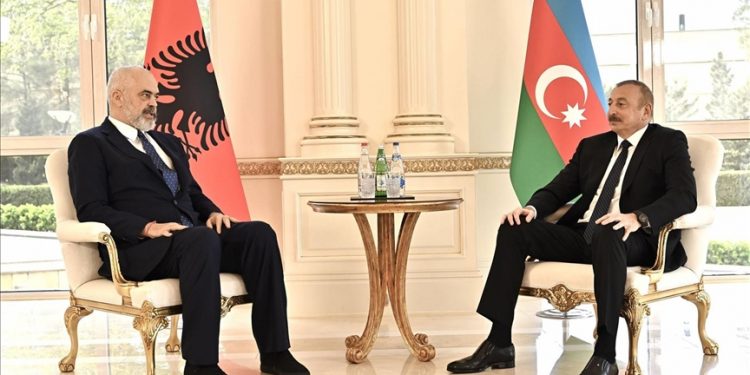 Aliyev received Albanian Prime Minister Edi Rama, who was paying an official visit, according to a statement by the Azerbaijani Presidency.

Touching on trade relations between the two countries, Aliyev said “we must work to increase our trade turnover. The figure is very small, but there is growth potential.”

On energy, Aliyev said “Azerbaijan has been a natural gas exporter to Europe for over a year, and Albania has always supported this initiative.”

“High-level representatives of your country have always participated in the Southern Gas Corridor Advisory Council meetings and contributed significantly to the implementation of this project.

“Today, the importance of the Southern Gas Corridor and particularly the Trans Adriatic Pipeline (TAP) seems clearer,” he added.

Emphasizing that cooperation in the field of energy has the potential to grow, Aliyev said: “Our representatives are negotiating to have a wider energy cooperation portfolio. Issues such as natural gas, transit, supply and electricity may be an important part of our agenda.”

Rama also expressed his pleasure to be in Azerbaijan after the liberation of Azerbaijan’s lands from long-standing occupation.

He emphasized that Albania has always supported and will continue to support Azerbaijan.

Noting that Albania welcomes Azerbaijan’s efforts for peace and long-term cooperation with Armenia, Rama said: “Fortunately, we have a strong bridge like Turkiye…There are areas that have the potential for the increase of our cooperation.”