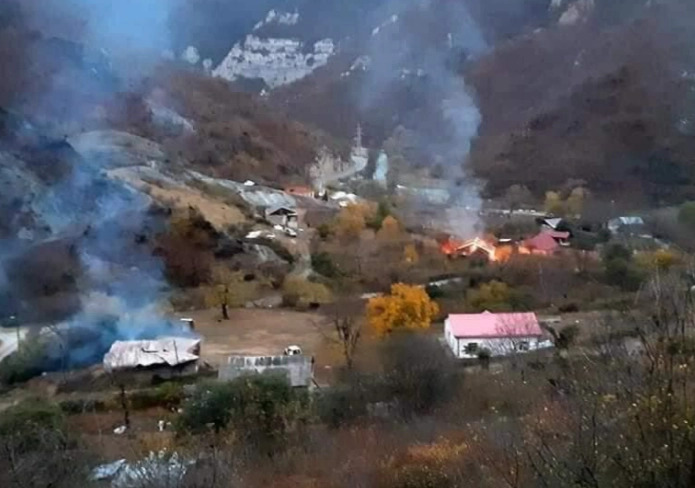 Image courtesy of local sources, fair use. Aerial view of the houses in Karabakh that were burned as the former occupation withdrew from the territory.

BBC News posted this broadcast of Armenians living in the Karabakh prior to the liberation setting fires to the homes they would soon be leaving behind. Fires set in infrastructure and forests continue to add to the environmental issues of the post-war process.

That astronomical toll on life in the region comes with a hefty financial sum. AzerNews reported on May 6 that Azerbaijan will spend $1.5 billion to restore the liberated territories in Karabakh. Azerbaijan will invest these funds to generate attraction for potential investors in the revival of Karabakh.

The Omnbudsman of Azerbaijan shared this video of beehives burned in the wake of Armenian occupation, as the Armenian forces left the region behind.

The action of burning these beehvies, see above, may have other consequences, as debris from the area could trigger the landmines left behind in the beehive plants. HALO staff reports mapping areas of the Armenian settelment where mines were detected, “dispatching survey teams into polygons” and forming investigative units in the most heavily populated areas to begin forming a clear idea of what mines are left behind in the wake of the war.

In the international community, alarm was sounded regarding the blazing beehives, the scorched earth, and the attack on future harvests by cross pollination prevention. The act of killing bees was seen as an act of agrarian suicide, harmful to the entire region.

Armenians burned down bee hives on their way out Karabakh

They left it a scorched earth

They wanted to kill off future harvests by preventing cross pollination

They wanted to specifically harm Azerbaijanis

Where r the concerns about Azerbaijanis? https://t.co/1SYf0G63aI

Industry is likewise braced with the looting damage to the natural resources of the region. Bees play an important role in environmental health, and the torching of bee boxes, and destruction of hives has raised some issues regarding the bee population in the region.

Additionally, regional national forests were likewise cut down, and timber transported from the scene by the withdrawing occupation. This timber will require major industry investment to regrow.

The nation’s ecology department continues to invest in youth, smart cities, and agrarian development. On April 13, the ministry announced the “From Start to Smart” project.

Even big cats may be in mortal peril as the aftermath of the war is fully realized, and scientists must discover ways to reach the endangered species among the mine fields.

“The project “From Start to Smart” will be implemented in partnership with the Ministry of Youth and Sports, MENR, the Agency for Agrarian Credit and Development under the Ministry of Agriculture, the New World program and the financial support of the Coca-Cola Foundation,” tweeted the Azerbaijani Ecology and Natural Resources Ministry.

Some challenges may be presented to the process of aftermath cleanup as industry that would replant decimated timber (see more below) will run into the issue of landmines in the process.

The project was aimed at targeting entrepreneurship education among the post-war youth. The project was determined to extend for a period of nine months and invest in creating innovative startup solutions for existing water problems in the nation. See this official press release.

Republic Underground met with a panel of thinkers to discuss ideas for new smart and sustainable city technology in Karabakh as the region must be rebuilt from the ground up.

The demand for water project entrepreneurship is at an all time high. Regional news outlets reported the pollution the war conditions added to local rivers. Below is an image of war zone sludge passing through the Okhchuchay River, flowing in the Zaniglan region, and then flowing into the Araz River.

#Armenia continues to pollute the Okhchuchay River, which flows through the Zangilan region and flows into the Araz River, said representative of the Ministry of Ecology and Natural Resources Mehman Nabiyev. pic.twitter.com/r7WL3CEHSg

At the end of the war REZA Photography captured this image of the timbers cut down in the wake of withdrawing occupant forces.

Issues of local contamination included reports from the Azerbaijani government that white phosphorous was captured in use in the territory during the conflict.

Decomposition of Armenia fired phosphorus projectiles to Fuzuli region on the 8th of October. While actively using phosphorus shells against civilian objects, #Armenia's accusations against #Azerbaijan is typical blame-shifting and tactics of escaping responsibility. pic.twitter.com/WsIjYxYy8S

The decomposition of white phosphorous munitions creates challenges to the environmental objectives in the region in the post-war process. Posionous discharge into water ways has been the source of a massive fish die off in the Araz River. 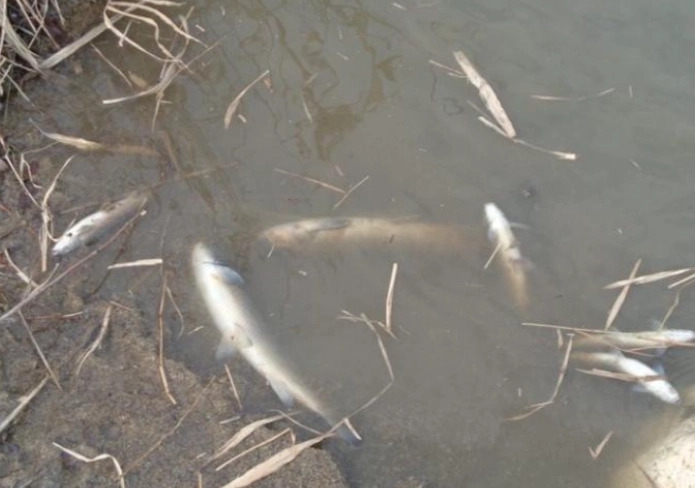 Environmental desecration as well? why? not to leave any means of living from the nature for the Azeri-Turks? #Armenia #Azerbaijan @Greens https://t.co/316miBR29G