ANAMA, together with UNICEF, delivers mine risk education to the population. Besides this, Azerbaijan has stated on several occasions that it does not produce, export or use new anti-personnel mines. 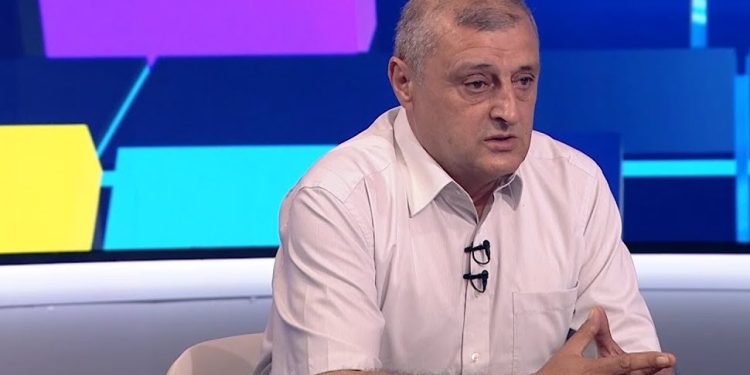 The Azerbaijani Campaign to Ban Landmines has been in existence for nearly twenty five years, and has implemented many actions in support of banning landmines. South Caucasus Landmine Observer interviewed Hafiz Safikhanov, Director of the Azerbaijan Campaign to ban Landmines, about the work of his organisation and the serious landmine problem in Azerbaijan:

Can you first tell us a little bit about the Azerbaijan Campaign to Ban Landmines? How is it contributing to the issue of landmine clearance in Azerbaijan?

The international conference “New Steps for a Mine Free Future” was held in Moscow on 28-29 May, 1998, to discuss the problem of anti-personnel mines within the territory of the former USSR.

After the end of this conference, the Azerbaijan Campaign to Ban Landmines (AzCBL) was established and officially formed on 3 June 1998. On 31 January 2007, the AzCBL was officially registered at the Ministry of Justice of the Republic of Azerbaijan. The AzCBL is a non-governmental, non-political, non-commercial organisation.

The AzCBL is a member of the International Campaign to Ban Landmines – Cluster Munitions Coalition (ICBL-CMC). This international coalition is a recipient of the 1997 Nobel Peace Prize. It is a global network of over 1,400 groups in more than 90 different countries, working together towards the vision of a world free of anti-personnel landmines.

The AzCBL conducts the monitoring of problems caused by landmines. It holds Mine Risk Education (MRE) Programs for populations living on the frontline and conducts campaigns on delivering information about landmine problems to populations and state bodies.

For the first time in Azerbaijan, the AzCBL created a database about landmine victims, conducted assessment of the needs of mine survivors within the territory of the former USSR.

For the first time in Azerbaijan and also within the territory of the former USSR, the AzCBL managed to lend money without interest to landmine survivors for them to establish small businesses. The AzCBL conducted 60 seminars on juridical, psychological assistance for landmine victims and taught them how to establish their own small business during the mentioned activities.

As part of our work, the UN Convention on the Prohibition of the Use, Stockpiling, Production and Transfer of Anti-Personnel Mines and on Their Destruction (Ottawa Convention) was published and translated into the Azerbaijani language; some articles of the Convention were shown on TV within the framework of the public campaign. The AzCBL organised a one-hour TV talk show about landmine problems in Azerbaijan with the participation of representatives of the MFA of Azerbaijan, Azerbaijan National Agency for Mine Action (ANAMA), NGOs, landmine survivors and students from various universities.

The AzCBL organised two international seminars about problems of anti-personnel mines and cluster munitions with participation of representatives from CIS, Turkey and Iran. The AzCBL conducted 42 monthly information bulletins, 62 press conferences, published more than 600 articles in the newspaper and gave numerous interviews about landmines and cluster munitions problems in Azerbaijan.

The AzCBL is involved in research and monitoring of the country’s landmine and cluster munitions situation, lobbying for Azerbaijan’s accession to the UN Convention on the Prohibition of the Use, Stockpiling, Production and Transfer of Anti-Personnel Mines and on Their Destruction (MBT) and Convention on Cluster Munitions (CCM), promoting public awareness about the issue and assisting landmine and cluster munitions survivors.

How do you assess the problem of landmines in Azerbaijan? More than 240 people have died or suffered life changing injuries as a result of landmines since the end of the second Karabakh War. What needs to be done to eliminate this problem?

The landmine problem in Azerbaijan began in 1988 after Armenia raised territorial claims to Azerbaijan. These territorial claims later led to a violent war. As a result of this war which took place in the internationally recognized territories of Azerbaijan, both sides used the weapons in their arsenal, including landmines. For about 30 years, Armenia kept 20% of the territory of Azerbaijan under occupation, during which it carried out massive mining in several echelons along the contact line of troops (280-300 km). Today, almost all mines neutralised by Azerbaijani deminers are Armenian-made anti-personnel and anti-tank mines with plastic bodies. According to some experts, the number of landmines in the territory of Azerbaijan is 1 million, and according to others, it is even more. In 2021, after some pressure on Armenia by international actors, mine maps of some regions were given to Azerbaijan. This figure in the three liberated regions alone is 200,000. In our conversations with deminers, they told us that sometimes 5-6 landmines are found in 1 m2 area.

According to the Landmine Monitor Report by the International Campaign to Ban Landmines – Cluster Munitions Coalition (ICBL-CMC), Azerbaijan is among the top 10 countries in the world in terms of the contamination and number of landmines.

How do you assess the support of the international community to the efforts of the Azerbaijani government to clear landmines across the country? What more needs to be done?

Azerbaijan needs very serious help from the international community to solve this problem as soon as possible. Azerbaijan uses all existing methods in humanitarian demining. Artificial intelligence has also been used to identify minefields for several months now. The applied drones are very good in determining the areas with mines and UXO and knowing their exact dimensions.

The main burden for carrying out these operations in Azerbaijan falls on the state budget. As far as I know, 60 million USD (120 million USD in total) has been allocated from the state budget of Azerbaijan for both 2021 and 2022. There has also been some help from the international community (the EU, the UK, France, Canada, the USA – these are the ones I remember). However, considering the scale of the landmine problem here, these amounts are extremely small. In my opinion, the reason for the lack of financial assistance from the international community is because Azerbaijan has not joined the Mine Ban Treaty.

None of the three South Caucasus countries has adhered to the Ottawa Convention, banning the use, storage and production of landmines. Is there hope that Azerbaijan will join the Convention anytime soon?

Indeed, none of the three South Caucasus countries have acceded to the Ottawa Convention. Each country also has their own arguments. However, recent military operations, especially the use of artificial intelligence, have greatly reduced the significance of mines in hostilities. Therefore, we call on all three countries to join this Convention.

Azerbaijan has stated that it supports the Treaty’s goals, but cannot accede “without settlement of the armed conflict, restoration of territorial integrity of the Republic of Azerbaijan, and having a threat of hostility resumption, even though Azerbaijan stopped [the] planting of additional mines.” In June 2021, Azerbaijan provided a detailed statement to the Mine Ban Treaty president, which elaborated on the government’s views on joining and adhering to the treaty. According to the statement, “Azerbaijan endorses the purpose and objectives of the Convention and appreciates the humanitarian spirit reflected therein.” However, it states that Azerbaijan is not a State Party “for the obvious reasons arising from our assessment that the military posture of neighbouring Armenia does not allow us to become a full-fledged party to the Convention.”

Since 2005, Azerbaijan has voted in favour of an annual United Nations General Assembly (UNGA) resolution promoting universalisation and implementation of the Mine Ban Treaty. Azerbaijan provided voluntary Article 7 transparency reports to the Mine Ban Treaty in 2008 and 2009, which provided information on mine clearance and victim assistance, but not stockpiling.

A new national mine action strategy is being developed in Azerbaijan, and the Azerbaijan National Agency for Mine Action (ANAMA) has been established. ANAMA has been highly active in implementing the important work of demining and in addition, the Ministries of Defense and Emergency Situations and the State Border Service have been involved in mine clearance. During 2021 year, 20,165 hectares of land liberated from occupation were cleared by these organisations; 41,503 landmines and unexploded ordnance were neutralised.

ANAMA, together with UNICEF, delivers mine risk education to the population. Besides this, Azerbaijan has stated on several occasions that it does not produce, export or use new anti-personnel mines. Azerbaijan allocates funds to humanitarian mine action from the government budget and helps some regions and neighbouring countries. Thus, it is clear that even though the Republic of Azerbaijan does not accede to the Ottawa Convention, it voluntarily resolves many issues arising from this Convention. In addition, after the military operations that took place on September 27 – November 10, 2020, the Azerbaijani lands were liberated from occupation and a new reality has already emerged in the region.

Yet one major step remains in order for the country to solve its landmine problems once and for all and commit to permanently protecting future generations from the danger of these weapons.

The AzCBL believes that the government of Azerbaijan must find ways to overcome its stated obstacles for joining the conventions. The AzCBL will continue its advocacy and lobbying efforts until Azerbaijan is prepared to bravely step forward and join the MBT so that future generations need not face the scourge of these weapons.