Iran has entered a gas swap agreement with Turkmenistan and Azerbaijan on Sunday on the sidelines of the 15th meeting of the Economic Cooperation Organization. 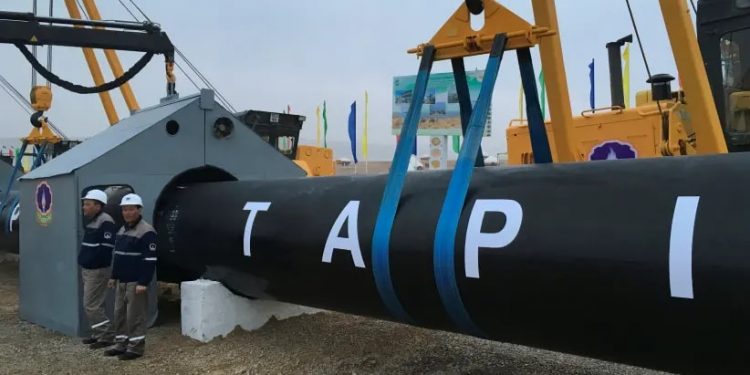 Workers stand near a gas pipe during the launching ceremony of construction work of the TAPI project on the Afghan section of a natural gas pipeline that will link Turkmenistan through Afghanistan to Pakistan and India, near the town of Serhetabat, Turkmenistan February 23, 2018. (photo credit: MARAT GURT / REUTERS)

“According to the agreement, 1.5 to 2 billion cubic meters of gas will be imported to Iran annually from Turkmenistan (Sarakhs) and will be sent to Azerbaijan (Astara) through the Iran Transmission Line Network,” Tasnim News reported in Iran.

Voice of America confirmed that Iran, Azerbaijan and Turkmenistan had signed a trilateral gas swap deal for up to 2 billion cubic meters per year, based on Iranian media reports. “The agreement was signed on November 28 in the Turkmen capital, Ashgabat, on the sidelines of a regional economic summit. Under the swap deal – which boosts an existing agreement – Iran will receive gas from Turkmenistan and deliver the same amount to Azerbaijan, Iranian Oil Minister Javad Owji told Iranian state media.”

The new deal was signed on the sidelines of the summit of the Economic Cooperation Organization. The organization comprises all five Central Asian countries – Turkmenistan, Kazakhstan, Kyrgyzstan, Tajikistan, and Uzbekistan, as well as Afghanistan, Azerbaijan, Iran, Pakistan and Turkey, the report says.

Iran’s goal here is to position itself as a key gas supplier and deepen ties with Azerbaijan and Central Asia. This has ramifications for the planned TAPI pipeline that links Turkmenistan, Afghanistan, Pakistan and India as well as the North Caucasus Transcaucasia Pipeline.

The report notes that “Iran’s gas relations with Turkmenistan had been suspended since December 2016, but with the conclusion of this agreement, a step forward was taken in the energy relations between the two countries.”

This means that “an important political message  lies at the heart of this agreement and can fulfill Iran’s plan to become a gas hub in the region.”

Now Iran sees this as a message that can shift Iran’s role in the region after years of not accomplishing much in this sector. “This message is important because it could facilitate Iran’s next steps in expanding trade with Turkmenistan, especially in the field of gas.”

Iran is concerned about the TAPI line and other attempts via the Trans-Caspian pipeline (TCP) that would have removed Iran from being a gas hub. “According to experts, concluding a gas swap agreement with Turkmenistan is the first step in implementing a master plan in the Ministry of Oil of the 13th government, the continuation of which will lead to the mating of these two rival pipelines of Iran’s regional gas market.”

Maps produced by Iranian media show how Iran can now be part of various gas pipelines and transit routes that would take a southern approach through Iran. “According to the pipeline, the Turkmen gas network connects the Caspian Sea to Azerbaijan and is designed to transfer the vast Central Asian gas resources to European energy markets through the Southern Gas Corridor.”

The Trans-Caspian Pipeline (TCP) between Turkmenistan and Azerbaijan will be connected from the Caspian Sea to the SCP pipeline inside Azerbaijan, the report says. Then, at the end of the SCP pipeline, a connection will be added to the TANAP pipeline in Turkey. This would give Iran more influence over Turkey and Europe through the Trans Adriatic Pipeline (TAP), including Greece, Albania and Italy, the report claims.

“Currently, the only missing link in the Southern Gas Corridor is the Trans-Caspian Pipeline (TCP), which has been stalled for years due to legal disputes in the Caspian Sea over investment and economic justification. As a result, Turkmenistan, the fourth-largest holder of gas resources in the world, has not yet connected to the European continent.”

This is important. It could give Iran more say over Central Asia and bring Iran closer to Turkey and Azerbaijan.

“In fact, this gas swap agreement is Iran’s first step to revive gas relations with the two influential countries in the Southern Gas Corridor, and further strengthening of these relations could permanently suspend the implementation of the Trans-Caspian project,” the report says. “Even if there is a large volume of gas transmission between Turkmenistan and Azerbaijan, it is possible that with the development of the gas network, Iran will be able to participate in this big game.”

The report sees this as very significant. It looks at the recent Taliban conquest of Afghanistan and the need for investment in the region. “As noted, Turkmenistan, as the fourth-largest holder of gas resources in the world, has played a significant role in two key gas transit projects in the region. Projects that were designed in the shadow of the darkening of Iran-Turkmenistan relations and with the aim of bypassing Iran.”

Now Iran wants to be back in good graces with Turkmenistan. The new Iranian government cares about this as part of a pivot to the east.

“The use of Iran’s natural gas network for Turkmenistan also has many advantages, the most obvious of which is the lack of investment required for the construction of new pipelines at exorbitant costs. By strengthening relations between the two countries and building mutual trust, Iran could pull Turkmenistan, two serious and threatening regional gas market rivals, out of the equation,” the report says.

“As a result, if we look at the issue of the gas swap agreement between Iran and Turkmenistan from this perspective, we will find that the issue of this agreement is not just the transfer of several million cubic meters and this agreement should be used as a step forward to change the equations of the regional gas market.” This could have major ramifications in coming years.