Is Pashinyan’s victory the best case scenario for Moscow? 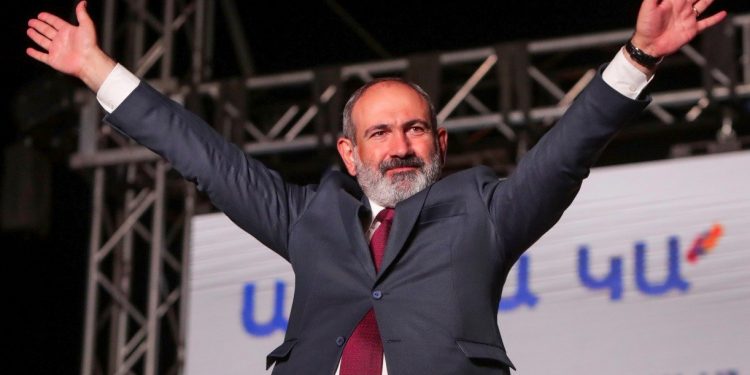 Armenia’s Civil Contract party scored a landslide victory at the 2021 parliamentary elections last week, securing the votes needed to preserve their ruling majority. The snap elections, called by Prime Minister Nikol Pashinyan, were seen as a referendum on the outcome of the 2020 Nagorno-Karabakh War. The conflict was widely interpreted as a defeat for Armenia, sparking mass protests over the Pashinyan administration’s handling of the war effort and the subsequent peace negotiations. Pashinyan described the November 9 armistice agreement, which involved large territorial transfers from the breakaway, Armenian-backed Republic of Artsakh back to Azerbaijan, as a “painful” necessity:  “This is not a victory, but there is no defeat until you consider yourself defeated. We will never consider ourselves defeated and this shall become a new start of an era of our national unity and rebirth.”

It appeared from the election results that a large portion of the Armenian population accepted Pashinyan’s assessment, but the full picture is more complicated. Despite several waves of popular demonstrations by the Prime Minister’s supporters and detractors in the months leading up to the elections, voter turnout did not exceed forty-nine percent. This is not as unequivocal a mandate as Pashinyan may have wanted, especially at a time of crippling polarization in Armenian politics. The opposing “Armenia Alliance,” founded and led by former President of Armenia Robert Kocharyan, still has not fully conceded defeat as of the time of writing, promising instead to publish evidence of widespread electoral misconduct. But observers from the United States, Russia, the European Union, and Organization for Security and Co-operation in Europe (OSCE) have all accepted the election results, which put the Civil Contract party at 53.96% against the Armenia Alliance’s 21.06%.

Though it was intended to be a referendum on Pashinyan and the outcome of the Nagorno-Karabakh War, the election to some extent became a referendum on his opponent. Kocharyan was widely accused of corruption throughout his presidency from 1998 to 2008. In 2018, he was charged over his alleged involvement in the 2008 election crackdown that led to hundreds of injuries and the deaths of eight protesters at the hands of the police. He was released on bail and proceeded to relaunch his political career as a leading opposition voice against the Pashinyan government. The charges against him were dropped by Armenia’s Constitutional Court in March 2021, but Kocharyan remains linked in Armenian political discourse with a kind of heavy-handed, “criminal-oligarchic” governing style that many in the country would prefer to leave behind. There is yet to be a comprehensive post-mortem of what went wrong for the opposition bloc, but Kocharyan’s political baggage was quite possibly a contributing factor to Pashinyan’s blowout victory.

Then there are the foreign policy implications of Pashinyan’s victory. A long-time friend of Russian President Vladimir Putin, Kocharyan brandishes all the credentials of a consistently pro-Russian politician. Earlier this year, Kocharyan called for a deeper, “full-fledged modern integration” with Russia. By stark contrast, Pashinyan has routinely been accused by commentators and politicians in Moscow of harboring anti-Russian views. “If we leave [Pashinyan] in power in Armenia,” said well-known Russian political scientist and politician Sergei Kurginyan, “this man will destroy everything we have achieved there . . . to leave Pashinyan in power is to cede Armenia to NATO.” A significant subset of Russian commentators seemingly still cannot forgive Pashinyan for coming to power via the 2018 color revolution against the government of Kocharyan ally Serzh Sargsyan. Pashinyan was one of the leaders of the “Way Out Alliance,” a liberal faction that favored European integration at the expense of deeper ties with Russia. As Prime Minister, he was accused of staffing his government with pro-western officials as part of a long-term plan to transform Armenia into an anti-Russian outpost in the Caucasus; Azerbaijan’s President Ilham Aliyev went as far as to accuse Pashinyan of being a “product” of billionaire investor George Soros.

But, in spite of the inflammatory charges being leveled against him, Pashinyan has yet to take even a single meaningful foreign policy step against Russia. From his first day in office, Pashinyan has sought to reassure the Kremlin that he is not looking to fundamentally alter the pro-Russian course taken by Kocharyan and Sargsyan. Not only has Pashinyan done nothing to reduce Russia’s considerable military presence in Armenia, but his government has signaled their openness to expanding the Russian military base in Armenia’s western region of Gyumri. “The issue of expanding and strengthening the Russian military base on the territory of the Republic of Armenia has also been on the agenda,” Armenian Minister of Defense Vagharshak Harutyunyan told reporters. Pashinyan even went as far as dispatching a small military contingent in 2018 to support Russia’s ongoing military mission in Syria. Russia continues to provide ninety percent of Armenia’s military equipment, with Pashinyan reiterating earlier this month that Russia is Armenia’s “main partner” on security matters and that there is no alternative to Armenia’s continued membership in the Russian-led military alliance known as the Collective Security Treaty Organization (CSTO).

Despite widespread disdain for Pashinyan among Russian elites, the Kremlin has done nothing to put its thumb on the scale of Armenia’s elections— least of all in Robert Kocharyan’s favor. If anything, the Kremlin may very well have concluded that Kocharyan’s victory could spawn more problems than it solves. Kocharyan’s promise to leverage his ties with Putin to tweak the Nagorno-Karabakh peace process in Armenia’s favor is a major liability for Moscow, which has no desire to renegotiate the fragile armistice agreement signed in late 2020. To the extent that Moscow wants to see an Armenian government that will uphold the agreement as it is currently written, Pashinyan— who is one of its three original signatories, along with Aliev and Putin— seems a safer bet.

Far from the Soros-NATO stooge that his Armenian, Russian, and Azerbaijani critics make him out to be, Pashinyan has established himself as a reliable, if not amenable, partner to Moscow. “I still see the Russian government preferring to see a Pashinyan government in power,” said Richard Giragosian, head of the Yerevan think tank Regional Studies Center, as reported by Eurasianet. “In many ways, Pashinyan has become a trophy for Putin: a legitimate, democratically elected leader well under Russian subordination and control. The opposite of [Belarusian President Aleskandr] Lukashenko.”

Mark Episkopos is a national security reporter for The National Interest