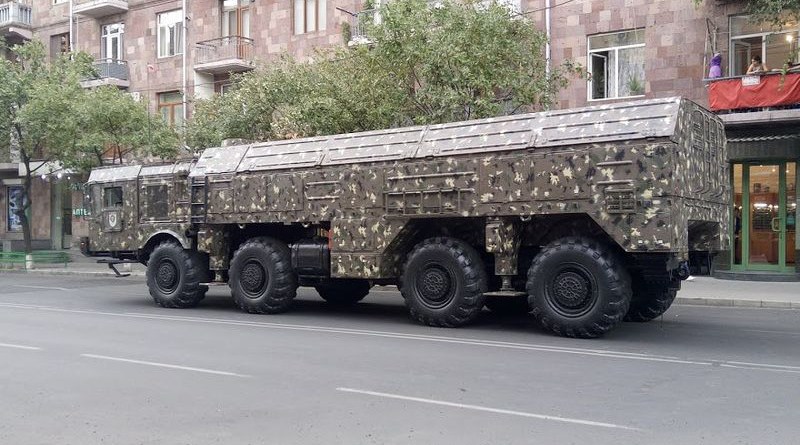 File photo of an Iskander missile of the Armenian army during a military parade in Yerevan. Photo Credit: Jonj7490, Wikipedia Commons

Not only has the war ended the three decades old occupation of the twenty percent of Azerbaijani territories by Armenia but also brought Turkey as a counterbalancing force into the region that was traditionally under Russia’s political dominance.

The war was also a testing opportunity for the alliances and strategic partnerships the two warring sides had established over the last three decades preceding the war. Unlike Azerbaijan, a non-member of any military alliance, Armenia entered the 44-day war within a formalized and institutionalized alliance with Russia under the umbrella of the Collective Security Treaty Organization (CSTO).  For Armenia, the military partnership with Russia was a major source of optimism for superiority in any armed confrontation with Azerbaijan, as Yerevan was confident that Azerbaijan would not dare to militarily counter Russia.

Yet less than three months before the eruption of the 44-day war, Armenia had provoked an armed escalation along the state border straddling Azerbaijan’s Tovuz and Armenia’s Tavush regions in mid-July 2020. Armenia’s sudden attack on its border with Azerbaijan, i.e., not on the line of contact surrounding the formerly occupied territories of Azerbaijan was widely interpreted as Yerevan’s intention to draw Russia more extensively in its conflict with Azerbaijan.

Armenia had apparently hoped that the CSTO would stand with Armenia and support its war against Azerbaijan, as the charter of the organization pronounces the principle of “an attack against one is considered an attack against all”. Towards this end, Yerevan quickly albeit unsuccessfully attempted to push for a special session of the CSTO which was not supported by other members as the Secretariat of the alliance declared that it would not take place.

The Tovuz escalation entailed with rapid armament of Armenia and militarization of its society. Weeks before the 44-day war, Azerbaijan alarmed against a series of military shipments from Russia to Armenia via indirect routes through the airspaces of Turkmenistan and Iran as the shorter route via Georgia was not available due to Tbilisi’s rejection to provide a channel for these supplies. Baku had also disputed the clarification by Russia’s Defense Minister Sergei Shoigu who unconvincingly noted that those shipments to Armenia actually contained construction materials for Russia’s military base in Gyumri, Armenia.

Despite these military deliveries before and, according to some reports, during the war, Russia refused to involve the CSTO into Armenia’s war against Azerbaijan, on the ground of the fact that the theatre of the fighting was not part of the territory of Armenia and as such did not fall under the jurisdiction of the CSTO. Russia persisted on this position regardless of the numerous attempts by the Armenian leaders to trigger the collective security principle of the alliance.

This allowed Russia to play a critical mediating role between the conflicting sides and help them come to terms in an agreement concluding the war. The trilateral ceasefire accord brokered by Russia’s President Vladimir Putin committed Armenia to withdraw from the rest of the Azerbaijani territories that had not been liberated by Azerbaijan during the war, brought Russia’s peacekeeping mission to the Karabakh region and established a ceasefire-monitoring center led jointly by Russia and Turkey. The accord also called for the unblocking of the regional transportation and communication links that had been blocked in the wake of the First Karabakh War of the early 1990s.

Hosting the first summit of the Azerbaijani and Armenian leaders on January 11, 2021, Russia re-affirmed its support to the ceasefire deal, called upon the sides to fully implement its clauses and arranged the work plan for the implementation of the agreement on opening of the regional transportation links.

All these developments, in spite of the sporadic scandals related to the activities of the Russian peacekeepers in the Karabakh region, created an impression that Russia might play the role of an honest broker and help Armenia and Azerbaijan to peacefully resolve the remaining contested issues on their agenda.

The recent confirmation of the use of Russia-made Iskander-M missiles against Azerbaijan in the course of the Second Karabakh War, quite the contrary, revived the old anti-Russian sentiments in the Azerbaijani society and caused uncertainty in the official relations between Baku and Moscow.

On April 2, the Mine Action Agency of the Republic of Azerbaijan (ANAMA) reported the finding of the remnants of the Iskander-M missiles, also known as SS-26 Stone in NATO reporting name, in Shusha, a town in the Karabakh region liberated by the armed forces of Azerbaijan during the war of last autumn. This finding, due to the facts that Iskander-M with a maximum range of 500 km is considered solely for the Russian army, prohibited for exports under the international agreements and only the export version of these missiles called Iskander-E is listed in Armenia’s arsenal, caused a massive outcry in Azerbaijan.

The debate about the use of missiles had, in fact, started earlier, in the immediate aftermath of the conclusion of the 44-day war in November last year when Armenian ex-army chief, colonel-general Movses Hakobyan declared that Iskander was used during the war but refused to provide the details. This was confirmed by Armenian Prime Minister Nikol Pashinyan on February 23. Countering the accusations by the former Armenian President Serzh Sargsyan who had asked why these ballistic missiles were not launched against Azerbaijan during the war as it would have tilted the balance in favor of Armenia, Pashinyan admitted the use of Iskander but regretted that only ten percent of the missiles exploded. His derogatory remarks about Russia’s well-known military product outraged the Armenian army leaders and Russia’s political and expert community. Facing the threat of a military coup and Russia’s objections, Pashinyan’s office later recanted his statement saying Prime Minister had been misinformed, adding that “There is no doubt that Russian weapons are one of the best in the world”.

On February 26, three days after Pashinyan’s statement about the use of Iskandar missiles during the war, President Ilham Aliyev of Azerbaijan stated that the Azerbaijani side had no evidence that missiles had been used against Azerbaijan during the war.

The finding by the ANAMA has, however, changed Aliyev’s mind. Commenting on the findings on April 12, President Aliyev addressed the Russian leadership asking for an explanation how the Iskander-M missiles which Armenia could not import were fired against the Azerbaijanis. According to him, he had already discussed this with President Vladimir Putin of Russia and Azerbaijan’s Defense Ministry had sent a request with video and photo materials confirming the use of Iskander-M to the Russian side. Azerbaijan has reportedly received no explanation from Russia.

Russia’s dismissal of the news about the deployment of Iskander-M by Armenia in the course of the Karabakh war raises eyebrows in Baku and, for President Aliyev, this begs the question of whether Russia controls military warehouses in Armenia.

The precarious balance Azerbaijan has maintained with its northern neighbor is challenged by Russia’s continuous military support to Armenia and Russia-supported modernization of the Armenian army as well. In his press conference with the representatives of foreign and local media in late February, President Aliyev underscored the potential repercussions of this process stating that “The provision of weapons like Iskandar missiles to Armenia does not serve to stability in the South Caucasus.” He also warned against the externally supported plans to modernize Armenian army, stating “Russian side says that it is ready to modernize the Armenian Armed Forces.” “But if we are talking about lasting peace, is it worth doing it?”, he rhetorically asked.

For Baku, as a guarantor of the ceasefire and the post-war regional arrangements, Russia should aim at de-escalation in the region and help the implementation of the peace-building initiatives such as the re-opening of regional transportation and communication channels between Armenia and Azerbaijan. Hence, the moves in the opposite direction, such as Moscow’s upgrading of the Armenian army and its military supplies to Armenia cause anxiety in Baku and raise numerous questions about the future of Russia – Azerbaijan relations.