The Second Karabakh War between Armenia and Azerbaijan changed geo-political situation in the South Caucasus.  It is very important to underline that after the Armenian defeat in the April 2016 War, when Azerbaijani army liberated the strategically important hill Lala-Tepe, Armenia’s top military leaders strived to regain lost positions rather than accept new realities. 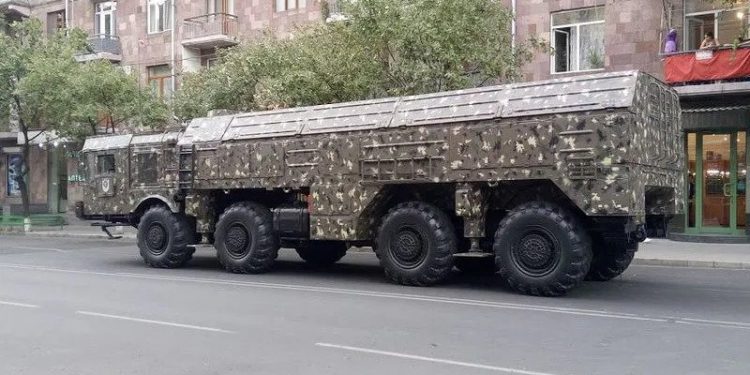 File photo of an Iskander missile of the Armenian army during a military parade in Yerevan. Photo Credit: Jonj7490, Wikipedia Commons

As a result of series provocations, full-scale military operations were launched along the entire front in order to suppress the combat activity of the Armenian armed forces, as well as ensure the safety of the civilian population on 27 September 2020.

The Second Karabakh War was a full-scale war with use of all types of heavy and modern weapons. Russian weapons such as the BM-30 Smerch, “Tochka-U” high-precision tactical missile system, and a Scud missile were mainly used by the Armenian army. Along with the Russian weapons, Azerbaijan actively used the Turkish and Israeli modern weapons and unmanned aerial vehicles (UAV).

Touching upon the issue of the tactical missile systems, it is worth mentioning that there were certain signs on the use of Iskander missiles against Azerbaijan during the Second Karabakh War. It should be noted that the Russian-made Iskander-E tactical ballistic missile (TBM) system with a maximum range of 280 kilometers were obtained by Armenia, and those missiles have been shown at the military parade in September 2016.  In fact, the acquisition of such a complex by Armenia threatened all strategic infrastructure in Azerbaijan. Earlier, the Azerbaijani Ambassador to the US Elin Suleymanov has also raised the issue of Iskander ballistic missiles during the meeting at the US National Defense University in 2017.

Since then, many Armenian military experts have highlighted the importance of Iskander-E missile systems for Armenian military forces, which had changed the balance in favor of Armenia. However, official Baku acquired the Belarusian-made Polonez multiple-launch rocket system as well as Israeli-made LORA operational-tactical missile system to keep balance in the region. So far, Azerbaijan has managed to counterbalance Armenia’s military capacity and sent a clear message to Armenia about the risks of use of the Iskander missiles against Azerbaijan. In addition, Azerbaijan strengthened its ballistic missile defence by purchasing the Israeli-made Barak-8 air defense system.

In fact, Iskander missiles were used against Azerbaijan during the Second Karabakh War.  The first remark about this complicated issue came from ex-army chief, colonel-general Movses Hakobyan. He noted that “it was used during the war though I will not say where”.  Later,  the Armenian Prime Minister Nikol Pashinyan made a very serious comment about the effectiveness of Iskander missiles. Armenian Prime Minister emphasized that “Russian-made Iskander ballistic missiles did not explode during the Nagorno-Karabakh conflict”. It is worth remembering the interesting fact when Armenia first demonstrated Iskander systems during a military parade in 2016, the former Defense Industry Minister Javer Jamalov noted “Armenia has Iskander-E missiles, and current operation time of these ballistic missiles have already expired”. After Nikol Pashinyan’s remarks on the low effectiveness of the Iskander complex, many Armenian and Russian military experts claimed that Iskander missiles were not used during the Second Karabakh War. In addition, Russia’s Defense Ministry also noted that “Moscow has objective and credible evidence that the Armenian army did not fire any Iskander missiles during the war”.

However, the Iskander dilemma became more complicated when the Mine Action Agency of the Republic of Azerbaijan (ANAMA) detected remains of Iskander missiles in Shusha city. It should be especially highlighted that the detected remains of missiles under the 9M723 index code belong to Iskander-M type. Iskander-M with a maximum range of 500 km is exclusive for Russian military use, while the Iskander-E (9M720) with maximum range of 280 km aimed for export, and Armenia became the first buyer of such complex.

How, one might ask, were the remains of the Iskander-M missile detected in Shusha city, and who launched the missiles?  Today, this is the main question to which many experts try to answer. To find an answer to this dilemma, one can note several important assumptions.

First assumption might be that Russia has sold Iskander-M missiles to Armenia instead of Iskander-E, and Armenian armed forces used those missiles against Azerbaijan.  In this case, official Moscow violates the  Wassenaar Arrangement on Export Controls for Conventional Arms and Dual-Use Goods and Technologies. In addition, Russian officials always claim that Iskander-M is a serious offensive weapon, and naturally, the complex will not be exported to other states.

Second assumption might be that Armenia through diaspora bought illegally Iskander-M missile systems, smuggled it through Russian customs and used them against Azerbaijan. In such situation, serious investigations must be launched in the Russian army to find out responsible persons. Illegal acquisition of such a strategic weapon is a serious threat not only to regional security but also to the whole world. Therefore, the official Kremlin should start its investigation into the remains of Iskander-M missiles in Karabakh as soon as possible. However, experts are sceptic with regard to a possibility to smuggle such weapon from Russia.

And the third assumption as some experts claim Russia could use Iskander-M missiles against Azerbaijan in order to stop successful military operations of the Azerbaijani army.  It is worth remembering that military operations were stopped after the Russian intervention of November 10, 2020. Russia, Azerbaijan and Armenia signed the Trilateral Agreement, and the official Kremlin became a key guarantor for the ceasefire and peace. According to the agreement, 1,960 armed troops, 90 armored vehicles, and 380 motor vehicles and special equipment units have been deployed to the Karabakh region. By this, Russia got military presence in all three South Caucasian countries.  If Russia used Iskander-M missiles against Azerbaijan then it may completely damage the image and credibility of the Russian peacekeeping forces in Azerbaijan.

Of course, all the above-mentioned are assumptions which need to be clarified by the Russian officials. According to Russian President’s Spokesperson Dmitry Peskov – “Iskander missiles were not used in Nagorno-Karabakh in the fall of 2020, and President Vladimir Putin was informed about the issue”. Apparently, this important issue and other developments were discussed between the Azerbaijani president Ilham Aliyev and the Russian president Vladimir Putin during a telephone conversation on April, 1, 2021.  Azerbaijan is waiting for reliable information and explanation about the Iskander-M dilemma in Shusha.

In the end, it is important to underline that the war is over. On the one hand, there are still some challenges such as the illegal transit of Armenian armed forces and weapons through the Lachin corridor to Karabakh, as well as the Armenian armed forces’ withdrawal from Azerbaijani territories, on the other hand, there are important opportunities for regional integration and stability. Armenia and Azerbaijan can support the reconciliation process by showing  goodwill. Towards this end, official Yerevan should implement all clauses of the November agreement as well as recognize the territorial integrity of Azerbaijan. Azerbaijan in return might resolve issue with detainees caught after 10 November 2020. Last but not least, the processes of disarmament within the context of post-conflict reconciliation should begin as soon as possible. As noted above, the Iskander-M missile system is a serious threat to the whole region, and the Shusha case demonstrated clearly that arms control is very important to strengthen peace and stability in the region.