Moody's Investors Service ("Moody's") has today changed to positive from stable the outlook of State Oil Company of the Azerbaijan Republic (SOCAR). 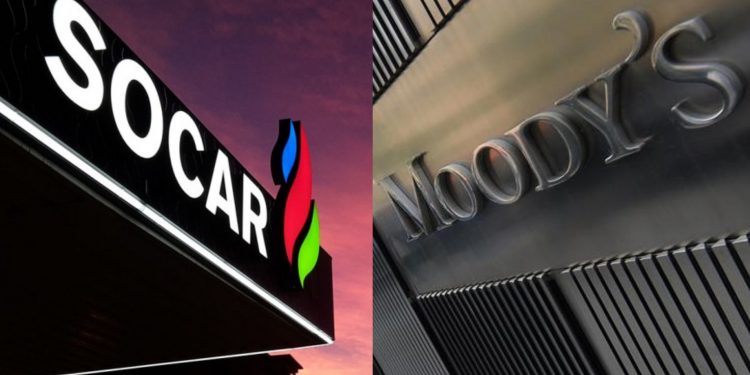 Today’s rating action follows a sovereign rating action on Azerbaijan which took place on 6 April 2021, during which Moody’s changed the outlook on Azerbaijan’s rating to positive from stable and affirmed the long-term issuer and senior unsecured debt ratings at Ba2.

Today’s rating action is in line with the sovereign rating action and reflects SOCAR’s strong credit linkages with the state, as well as its exposure to Azerbaijan’s operating and macroeconomic environment.

The positive outlook on Azerbaijan’s rating reflects Moody’s assessment that governance and in particular policy effectiveness is improving, albeit from a low base, which may raise the resilience of the government’s credit profile. In particular, enhancements to the monetary and macro policy framework may promote stability in the external and banking sectors in the face of shocks, while continued effective use of sizeable fiscal buffers would allow counter cyclical spending and limits the deterioration in the government’s fiscal and debt metrics.

As a result, Moody’s expects that operating and macroeconomic environment for SOCAR will gradually improve, supporting its credit profile.

Given that SOCAR is 100% state owned, Moody’s applies its Government-Related Issuers (GRI) methodology to determine the company’s CFR. SOCAR’s CFR of Ba2 factors in (1) the company’s BCA of b1, which measures its standalone credit strength, excluding any extraordinary government support; (2) the Ba2 local-currency rating of the Government of Azerbaijan, with a positive outlook; (3) the very high default dependence between the state and the company; and (4) the high probability of the government providing support to the company in the event of financial distress.

SOCAR’s b1 BCA factors in (1) the company’s key role in the oil and gas sector of Azerbaijan and the national economy; (2) its sustainable hydrocarbon production volumes; (3) Moody’s expectation that SOCAR’s credit metrics will improve in 2021 driven by a recovery in oil and gas prices; (4) the company’s adequate liquidity, underpinned by substantial cash balances and a comfortable debt maturity schedule; and (5) its close links with the Azerbaijan government, which has accumulated substantial reserves and should be in a position to provide financial support to the company if needed.

The BCA also takes into account (1) the company’s sizeable trading operations, which dent its consolidated profitability margins, inflate leverage and limit predictability of financial results; (2) uncertainty regarding the execution of two put options provided by the SOCAR group to Goldman Sachs International (A1 stable) in 2014-15 in relation to shares in SOCAR’s certain assets in Turkey, with a total amount of AZN2.7 billion as of 31 December 2019, which expire in 2021 and, if exercised, may exert pressure on SOCAR’s liquidity; and (3) complex organisational structure of the SOCAR group and lack of transparency and disclosure with regard to foreign assets and transactions with shares in various subsidiaries and affiliates.

RATIONALE FOR THE POSITIVE OUTLOOK

The positive outlook on SOCAR’s rating is in line with the positive outlook on Azerbaijan’s sovereign rating and reflects its strong positioning within its current rating category, with a potential for an upgrade if Moody’s were to upgrade Azerbaijan’s sovereign rating, provided there is no material deterioration in the company’s specific credit factors, including its operating and financial performance, market position, credit metrics and liquidity, and no weakening in the probability of extraordinary state support in the event of financial distress.

Moody’s could upgrade SOCAR’s rating if it were to upgrade Azerbaijan’s sovereign rating, provided there is no significant deterioration in the company’s specific credit factors, including its operating and financial performance, market position, credit metrics and liquidity, and no weakening in the probability of extraordinary state support in the event of financial distress.

Moody’s could downgrade SOCAR’s rating if it were to downgrade Azerbaijan’s sovereign rating or there is an evidence that the government’s capacity and willingness to provide extraordinary support to SOCAR are diminishing, or in case of state measures that would significantly impair SOCAR’s credit profile (including unfavourable regulatory developments or adverse changes in the taxation regime, significant equity withdrawals or a growing exposure to the domestic and international infrastructure projects of the state if the company does not have sufficient capacity to fund such projects). Moody’s could also downgrade the rating if SOCAR’s retained cash flow (RCF)/net debt declines below the mid-teens in percentage terms and EBIT/interest expenses declines below 3.0x, both on a Moody’s-adjusted and sustained basis, or if its liquidity deteriorates significantly.