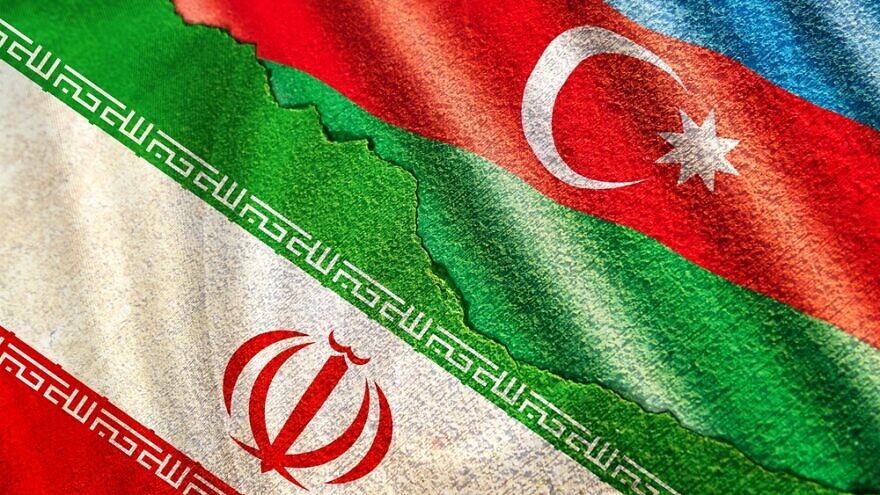 A 3D illustration of flags pertaining to the Iran and Azerbaijan relationship in crisis. Credit: Open Art/Shutterstock.

Azerbaijan freed two Iranian truck drivers on Oct. 21 after their arrest last month in a sign of thawing relations after tensions spiked, in part due to charges by Iran that Israel had a military presence in the country.

Baku claimed the drivers had entered the country illegally and bypassed border control to avoid customs duties it recently imposed, reported AFP. Azerbaijan said that the foreign ministers of the two countries spoke and agreed to resolve their differences through dialogue.

Alex Vatanka, director of Iran Program and a senior fellow at the Frontier Europe Initiative at the Middle East Institute in Washington, says that “the key point is neither side wants to escalate and neither can afford it, and they each accept that tough reality.”

Meir Javedanfar, a lecturer on Iranian politics at IDC Herzliya in Israel, told JNS that continuing the current tensions is “not in the interest of Iran or Azerbaijan.”

“Azerbaijan is mainly concerned about tensions with neighboring Armenia and developing its economy, and a war with Iran would not serve its interests,” he said.

A war with Azerbaijan could also cause unrest with the Iranian Azeri population.

Last week, Brenda Shaffer, a senior fellow at the Atlantic Council’s Global Energy Center, told JNS, “Israel and Azerbaijan maintain a strategic alliance. It is not just about arms sales or oil, but a very deep strategic cooperation.”

‘Both sides decided to calm the atmosphere’

Over the last several weeks, Armenia and Azerbaijan have been engaged in an escalating conflict centered on a decades-long dispute over the Nagorno-Karabakh region, which is internationally recognized as Azerbaijani territory but has been illegally occupied by Armenia since their first war ended in 1994.

Iran sought to threaten Azerbaijan by holding military exercises along the border earlier this month.

“We do not tolerate the presence and activity against our national security of the Zionist regime, or Israel, next to our borders,” said Iran’s Foreign Minister Hossein Amirabdollahian, reported the AP. “And we will carry out any necessary action in this regard.”

There have been rumors that Israel is using Azerbaijan territory to carry out covert operations against Iran.

As a result of friction, Azerbaijani President Ilham Aliyev had a picture taken of himself with his hand on an Israeli-made Harop drone.

On Iran’s side, continued Javedanfar, “there is great concern over the sanctions, and it would prefer to spend its resources in countries where it has a strong influence, such as in Iraq, Syria, Lebanon and Yemen.”

So, in the end, he added, “both sides decided to calm the atmosphere. But this is not the end.”

Another issue bound to come up in the future is Azerbaijan’s building of a road along the Iranian and Armenian border so that Iranian trucks would pass through Azerbaijan on the way to Armenia, explained Javedanfar.

He wrote in an article on Oct. 14 for the Middle East Institute that Iranian threats towards Azerbaijan could strengthen Israeli ties with the country.

“It was Iran’s own policies that played an important role in bringing Azerbaijan and Israel together in the first place. Since its independence in 1991, Azerbaijan, which is a secular Shi’a-majority state, has wanted to improve relations with the West,” he wrote.

Col. (res.) Eran Lerman, vice president of the Jerusalem Institute for Strategy and Security, wrote that Western policy towards Iran must deal with Tehran’s use of military intimidation and terror by proxy against regional players.

“As tensions rise over Iran’s nuclear program, Tehran apparently hopes to intimidate countries in the region and warn them against offering any assistance to Israel and other forces aligned against the Iranian regime,” wrote Lerman, the former deputy director for foreign policy and international affairs at the National Security Council in the Israeli Prime Minister’s Office.

“Ultimately, Iran seeks to frustrate what they suspect to be Israel’s plans and to deter Israeli leadership from acting against it,” he said.