Azerbaijan had deployed an Israeli-made defense system to shoot down a Russian-made missile that Armenia launched in the closing days of last fall's war over the disputed region of Nagorno-Karabakh. 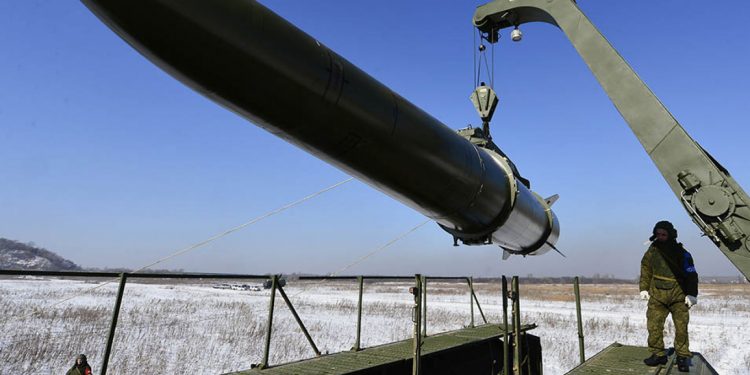 Azerbaijan had deployed an Israeli-made defense system to shoot down a Russian-made missile that Armenia launched in the closing days of last fall’s war over the disputed region of Nagorno-Karabakh, the Middle East Eye news website reported.

An unnamed official said Yerevan had launched a Russian Iskander missile “directly into the capital” of Azerbaijan days before signing a ceasefire with Baku in November, the outlet reported without indicating which country the official represented.

“But a missile defense system operated by the Azerbaijani military, an Israeli-made Barak-8, shot it down,” the Middle East Eye quoted them as saying.

“I think, among other things, it convinced the Azerbaijani leadership to go for a ceasefire,” the source said, noting that “further use of these missiles could really escalate the situation on the ground.”

A Turkish military researcher interviewed by the outlet said Armenia resorted to Iskanders after Soviet-made Tochka and Scud missiles as it lost ground in the conflict.

“We believe that Russians played a role since the missile command center is jointly run by Armenian and Russian military officers,” said Can Kasapoglu, defense research director at the Center for Economics and Foreign Policy Studies (EDAM).

The sides signed a Russia and Turkey-brokered ceasefire following six weeks of clashes and bombardments over the disputed territory of Nagorno-Karabakh that killed 6,000 people. Azerbaijan recaptured four districts that had been under Armenian control for 26 years and seized control of a strategic city.

Iskander missiles have in recent days become a sore point of contention within Armenia, whose prime minister faced accusations by his predecessor of not using them until the end of the conflict.

Armenian Prime Minister Nikol Pashinyan said in response that an overwhelming majority of Iskanders had misfired, comments that led to a tense row with top generals who demanded his resignation. Russian officials also took umbrage with Pashinyan’s comments, leading him to walk back the remarks Monday and attributing them to misinformation.

Azerbaijan committed to the purchase of the Barak 8 air defense systems, with 12 launchers and 75 surface-to-air missiles, from Israel after test firing them in 2016.