All the above-mentioned transport projects promise to speed up the economic development of Karabakh and aim to transform this war-torn area into an important regional transport hub. 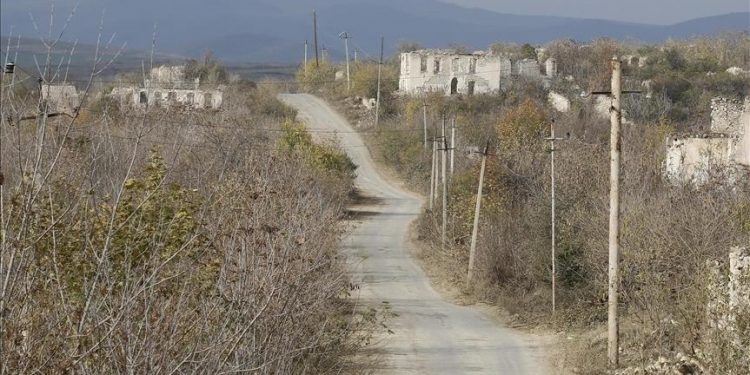 In late April 2021, Azerbaijani President Ilham Aliyev laid the foundation for building an international airport in Zangilan District, as part of the national restoration process for Karabakh and the surrounding de-occupied regions (Abc.az, April 27). Speaking at the ceremony, Aliyev mentioned that the geographical location of the district and the transit capacity potential of the new airport will create opportunities for turning Zangilan into an international transport and logistics center. With a three-kilometer-long runway, the new airport will be able to accept all types of aircraft, including heavy-duty planes. The Zangilan airport will be one of three airports under development in and around Karabakh. The other two will be situated in the neighboring Fizuli and Lachin regions.

The restoration and reconstruction work in Karabakh started immediately after the signing of the trilateral declaration between the presidents of the Russian Federation and Azerbaijan and the prime minister of Armenia on November 9, 2020 (President.az. November 10, 2020). This declaration ended the 44-day Second Karabakh War and led to the restoration of the territorial integrity of Azerbaijan. For Baku, the main goal in the first stage of the restoration process is the establishment of all necessary transport routes and infrastructure that can subsequently accelerate the implementation of other projects and economic development in the Karabakh region.

Despite the large-scale destruction suffered by the previously occupied territories while under Armenian control, Azerbaijan has been able to quickly start and implement several important projects in its liberated areas. Notably, construction work on the first airport in Karabakh, situated in Fizuli District, has already begun, with the foundation having been laid on January 14 (Trend, April 22). The airport’s planned 2.8-kilometer runway is expected to be put into operation before the end of 2021. Fizuli airport will facilitate the travel of foreign visitors to the regained territories, especially to Shusha, the cultural center of Azerbaijan (see EDM, November 12, 2020). Moreover, the connection of Fizuli airport to the Fizuli–Shusha highway will facilitate tourist travel to Karabakh (Azernews.az, May 3, 2021). Further plans include building a third airport in Lachin District, although a suitable location is yet to be settled on (Axar.az, April 20). The new international airports around Karabakh will cover the entire liberated area well as the eastern Zangazur zone.

Beyond airports, Azerbaijan has also commenced work on restoring and expanding the network of local highways and railroads. The planned roads will enable access to Karabakh from the northern, eastern and southern directions.

Northeast of the liberated territories, Azerbaijan is repairing a 28-kilometer highway that connects the city of Tartar with the villages of Sugovushan and Talish (Azernews.az, December 30, 2020). And a planned extension of this project will restore 22 kilometers of highway from Talish to Naftalan.

South of Karabakh, Azerbaijan is building the Ahmadbeyli–Fuzuli–Shusha highway, which will stretch to the center of Karabakh and end in Shusha (Azernews.az, January 7, 2021). The total length of this road will be 101 kilometers, and it is expected to be completed by late 2021 or 2022. The highway’s extension to Fizuli airport increases its strategic importance. Other overland transportation corridors in the southern direction include the Horadiz–Zangilan–Qubadli–Lachin road and the Horadiz–Fuzuli–Shusa railway (Report.az, December 18, 2020). Currently, these projects are in the planning stages; but implementation is expected to start in 2021.

The other crucial transit project for the region is the Horadiz–Agband railway. The foundation for this route was laid in February of 2021, and construction continues (Abc.az, February 15, 2021). At a 100 kilometers long, this railroad has strategic importance for Azerbaijan as it will connect the mainland with Nakhchivan, Azerbaijan’s landlocked exclave, via the Zangazur corridor (i.e., across southern Armenia—see EDM, April 5, 13, 21).

The (re)establishment of new railway lines is not only planned in the southern direction of Karabakh. In the eastern direction, restoration work is underway on the Barda–Aghdam railroad. This rail line was part of the 104-kilometer Yevlakh–Khankendi railway corridor, the operation of which had to be halted three decades ago, following the outbreak of Armenian-Azerbaijani hostilities over Karabakh. In the first stage of renovation, work will focus on a 45-kilometer section from Barda to Agdam, at a cost of $2.94 million, allocated by the government (Azertag, January 7). After that, reconstruction of the entire length of the Yevlakh–Khankendi railway will be feasible.

All the above-mentioned transport projects promise to speed up the economic development of Karabakh and aim to transform this war-torn area into an important regional transport hub. The connection of new and rebuilt transit routes in and around Karabakh to preexisting road and rail lines in eastern Azerbaijan as well as to the Zangazur corridor will not only expand the regional transport network but can also positively impact regional cooperation. Namely, these projects will support the implementation of the provisions of the trilateral declaration signed between Russia, Azerbaijan and Armenia, which envisions the eventual reopening of all communication links in the region. More broadly, the emerging transport hub in Karabakh will strengthen the position of the entire South Caucasus within the scope of trans-Eurasian transport projects such as the Middle Corridor and the International North South Transport Corridor—yet another illustration of how the outcome of the Second Karabakh War is changing the geopolitical realities of this corner of the world (see EDM, December 3, 2020 and February 18, 2021).