Since the beginning of Russian President Vladimir Putin’s large-scale and brutal re-invasion of Ukraine, the South Caucasus has inevitably received much less international attention. 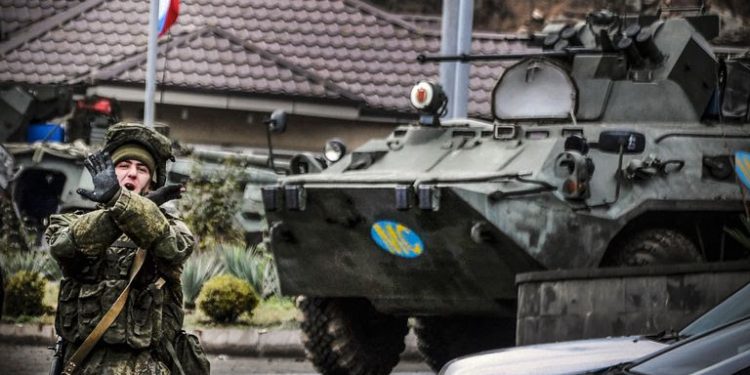 But tensions in the latter region have increased on three key levels: between Russia and the West, between Azerbaijan and Armenia, and between groups inside each of these two formerly warring South Caucasus countries. Tensions between Russia and the West over the war in Ukraine have led to the suspension, if not complete collapse, of the Organization for Security and Cooperation in Europe’s (OSCE) Minsk Group, which had been the primary venue for discussions about the resolution of the Azerbaijani-Armenian conflict for more than two decades (Kavkazsky Uzel, April 12). Tensions between Azerbaijan and Armenia have intensified over issues like peacekeepers and transit corridors, even as the two sides have talked about a peace treaty between them—a settlement agreement that might or might not involve Moscow (IA Rex, April 11; see EDM, March 29, April 14). And finally, tensions within the two South Caucasus countries have grown, especially inside Armenia, between those seeking a settlement and those holding out for an independent Karabakh, but also in Azerbaijan, between those who believe Baku should use its preponderance of forces to demand the withdrawal of Russian peacekeepers and those who believe diplomacy still offers the best way forward (Vestnik Kavkaza, April 13; Regnum, April 11).

This three-level chess match is further complicated by two other realities: On the one hand, what is going on at any one of these levels is interacting with what is taking place on the other two, both intentionally and not. And on the other hand, these dynamics are further deepening the long-standing divide between those who think that they will benefit most from a peace settlement (especially those in Azerbaijan who want a ratification of their country’s military victory in 2020 in view of the expected stability such an agreement could bring) and those (like many in Moscow and some in Armenia) who believe that they are better off without such an accord lest any agreement cost them influence in the region or domestically in Azerbaijan or Armenia. Given this complexity, observers are warning that the situation surrounding the more-than-three-decade-long Armenian-Azerbaijani dispute could develop in unpredictable and possibly explosive ways, reordering the geopolitics of the region and the world more generally (IA Rex, April 11).

Even before Putin sent the Russian military into Ukraine at the end of February, he took steps to make sure that he would not face a second “Caucasian front,” according to Aleksandr Krylov, a specialist on the Caucasus at Moscow’s National Research Institute of World Economy and International Relations (IMEMO), in the Russian Academy of Sciences. Given that Turkey intervened there during World War I and was pressed by Nazi German leader Adolf Hitler to do so again in World War II (though ultimately did not), some in the Russian capital expressed fears that Turkey might take advantage of the current situation in Ukraine to expand its presence in the South Caucasus. To avoid that, Krylov says, Moscow simultaneously tilted toward Azerbaijan to reduce the possibility that Ankara would move and worked to convince Armenia that Russia would guarantee the security of Armenians in Karabakh even after Yerevan recognized that region as part of Azerbaijan (Kavkazoved.info, February 25).

But once the present Ukrainian war began, Moscow cut back its attention to the South Caucasus, and both Armenia and Azerbaijan sought to gain support for their positions in the West. In turn, the West, which had suspended conversations with Moscow in the Minsk Group at the start of the Russo-Ukrainian war, invited the leaders of Armenia and Azerbaijan to Brussels to discuss a final settlement. That prompted Russian Foreign Minister Sergei Lavrov to declare that the OSCE Minsk Group was dead because the West was trying to settle matters in the former Soviet space without the participation or and, indeed, in direct opposition to Moscow (IA Rex, April 11). Given that Russia is the only co-chair of the former grouping with “peacekeeping” military forces deployed on the ground in Karabakh, Russia’s chief diplomat asserted that Moscow would take the lead in promoting a settlement (IA Rex, April 15).

Russia says it cares about having the 1991 Azerbaijani-Armenian borders recognized, something Baku wants but Yerevan questions unless special arrangements can be reached to guarantee the protection of ethnic Armenians in Azerbaijani territories. But Russia also wants to retain troops on the ground, not only to counter any possible Turkish expansion at its expense but also to remain in a position where it can continue to exclude other powers—in particular Turkey, Iran and the United States—and play Yerevan and Baku off against one another. This has been the basis of Russian strategy in the South Caucasus for decades, going all the way back to Soviet times (see EDM, March 9, 2021).

The demise or at least eclipse of the OSCE Minsk Group now gives Russia new opportunities to promote its interests; but this change does not come without risks. The Minsk Group had regularized diplomatic conversations about the conflict and, thus, kept others at bay. Yet now Yerevan and Baku are talking to each other, and the West is becoming involved directly, rather than through the mediation of the Minsk troika (Russia, France and the US). Those developments challenge Moscow’s past approach and raise questions as to how successful it can be in this brave new world. As a result, some Russian analysts are suggesting that post-Minsk, Moscow’s position in the South Caucasus may suffer (IA Rex, April 15, 2022).

It remains an open question whether that will be the case or, instead, whether Baku, Yerevan, Ankara or Washington will gain. But the Russian side has given one clear indication of how it intends to proceed. Moscow has named a new special representative to support the normalization of relations between Armenia and Azerbaijan. He is Igor Khovayev, 60, who has served as Russian ambassador to Vietnam and other countries in Asia (Kavkazsky Uzel, April 12). With this appointment, Moscow clearly intends to position itself as a supporter of a peace accord between Armenia and Azerbaijan but to do so independently of the former Western co-chairs of the Minsk Group. Doing so will not be easy, but it will keep Russia in the game, albeit one in which others will be more active at the same time.