Karabakh’s destruction should be brought to International Court of Justice: Turkish president

It is necessary to corner West by asking for compensation, Recep Tayyip Erdogan says at joint news conference with his Azerbaijani counterpart Aliyev. 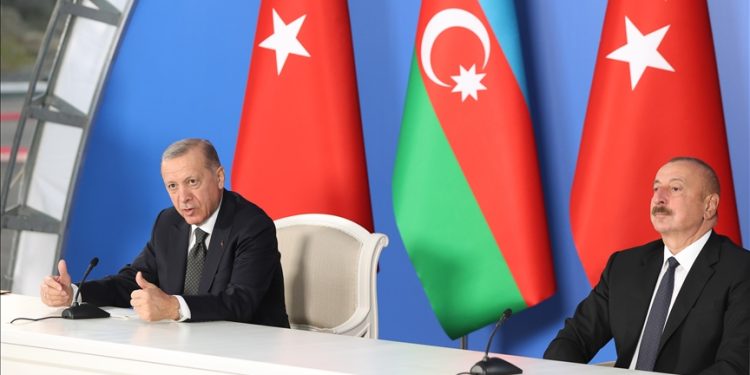 The destruction of the Karabakh region during Armenia’s occupation should be brought to the International Court of Justice, Turkish President Recep Tayyip Erdogan said on Thursday.

“Now I look to my right and left. What did they do to Jabrayil during the occupation period? I asked Aliyev, did the OSCE (Organization for Security and Cooperation in Europe) or EU come to this place? He said: ‘No, they didn’t come.’ Why they didn’t come? Because they will see their own disgrace. They will see what the West did here to Jabrayil and whole Karabakh by giving support during the occupation process.

The meeting came after the leaders jointly inaugurated the Zangilan International Airport, Azerbaijan’s second airport in territories reclaimed from Armenia during the 2020 Karabakh War.

Erdogan said Türkiye is ready to stand by Azerbaijan in all sectors, particularly in agriculture, green energy and smart cities, as part of the Karabakh Action Plan.

Relations between former Soviet republics, Azerbaijan and Armenia, have been tense since 1991, when the Armenian military occupied Nagorno-Karabakh, a territory internationally recognized as part of Azerbaijan.

Baku liberated several cities, villages, and settlements from Armenian occupation during 44-day clashes in the 2020 fall, which ended after a Moscow-brokered truce. The peace agreement is celebrated as a triumph in Azerbaijan.

Erdogan said the opening of the second airport in the liberated Azerbaijani territory within a year is not easy task that every country can achieve after a troubled period.

“In such a short time, Azerbaijan is rising from its ashes and rising again. The international airport that we opened in Zangilan is an indication that after the heroic epic of Azerbaijan, now the epic of development of Karabakh has been written,” he added.

Regarding the opening of Zangezur corridor, which runs through Azerbaijan and the autonomous region of Nakhchivan, Erdogan said “there is no need to fear.”

“This road will contribute to the peace, tranquility and stability of the region and will provide trade and investment opportunities for all countries on the east-west-central corridor route with the Caspian crossing,” he added.

The region of Zangezur was part of Azerbaijan, but in the 1920s, the Soviets gave the region to Armenia, where it is now known as Syunik. This deprived Azerbaijan of its direct overland route to the Nakhchivan exclave.

For the corridor, Azerbaijan has focused on planned connections including motorways and a 43-kilometer (26.7-mile) railway.

Aliyev said in May that Baku agreed with Yerevan on establishing the corridor, including the construction of both railways and highways.

Following the completion of the railway, Azerbaijan will be able to reach Iran, Armenia, and Nakhchivan. The railway would also link Türkiye with Russia through Azerbaijan.

Erdogan said Azerbaijan is “sincere” in talks with Armenia, adding: “Azerbaijan has revealed that its ultimate goal is lasting peace, prosperity and stability.”

“Azerbaijan-Armenia and Türkiye-Armenia normalization processes are progressing in a way that supports each other,” he added.

Earlier this month, Erdogan, Aliyev, and Armenian Prime Minister Nikol Pashinyan had a brief conversation ahead of the European Political Community summit in the Czech capital, Prague.

Aliyev recalled that two years ago today the Azerbaijani army liberated Zangilan, noting that the presence of Erdogan in Azerbaijan on this day has a special meaning.

He said winning the Second Karabakh War is the “common victory” of Türkiye and Azerbaijan as Ankara, since the first days of the war, declared its political and moral support to Azerbaijan.

The Azerbaijani leader said that wide-range reconstruction works are underway in the liberated territories and thanked the Turkish companies working in the area for rapid construction and renovation works in the area.

He reiterated that during the Armenian occupation all Azerbaijani buildings and constructions were destroyed.

“Work will be done to restore Karabakh and Eastern Zangezur,” he said.

Aliyev said that all internally displaced people of Azerbaijan will be back to their home once the reconstruction work is completed.

Following the Shusha Declaration, Aliyev said Türkiye and Azerbaijan again reiterated its unity and cooperation in all spheres.

With the Shusha Declaration, Türkiye and Azerbaijan expressed their determination to act jointly in the case of a threat or an attack on the independence, sovereignty, territorial integrity of any of the parties, or the security of their internationally recognized borders.

“Türkiye is advancing with confidence, realizing huge projects, having a say in the region, and everyone in the world reckons with it,” he said.