French Ambassador to Azerbaijan Zacharie Gross has finally broken his silence and resurfaced. The head of the Fifth Republic's diplomatic mission posted on Twitter that French MFA reaffirmed that France is fully mobilized to advance peace between Azerbaijan and Armenia. 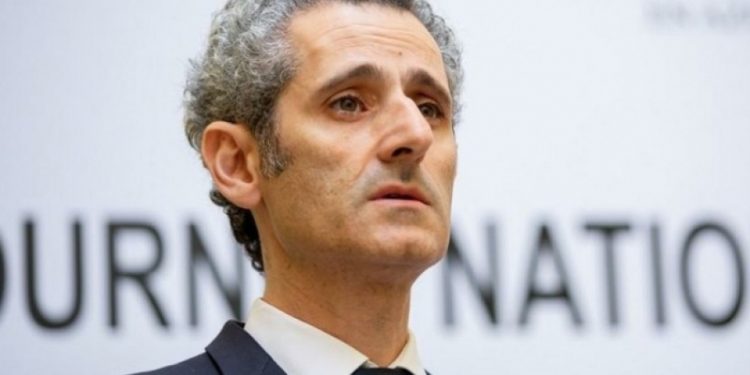 Many media, including Minval, quoted that tweet of his: “The meeting in Prague of President Macron, President Aliyev, Prime Minister Pashinyan & President Michel and the joint statement they adopted are a step towards this goal. France supports the EU negotiation of peace deal.”

French MFA yesterday reaffirmed that 🇨🇵 is fully mobilised to advance peace between 🇦🇿🇦🇲. The meeting in Prague of Pdt Macron, Pdr Aliyev, PM Pashinyan & Pdt Michel and the joint statement they adopted are a step towards this goal. 🇨🇵 supports the 🇪🇺 negotiation of peace deal.🕊

Now Monsieur Gross has taken the next step, the Turan agency has published his piece, where he focuses heavily on the meeting in Prague, saying that “the active support of the EU to the peace process for nearly one year has been invaluable and the French President’s involvement was critical to reaching the successful outcome in Prague”, talking about peacebuilding, recalling that “France has friendly relations with all of the three states of the South Caucasus, just as Azerbaijan has friendly relations with a great number of European countries. The bilateral relationship between France and Azerbaijan is important, intense and long-lasting and has benefitted from the personal input of our two countries’ leaders since the independence of Azerbaijan, 31 years ago. For this reason, I am convinced that any misunderstandings can and will be overcome,” etc. He concludes his statement with a very emotional appeal: “Long live the Spirit of Prague!”

We will not speculate how long it took French diplomats to translate President Ilham Aliyev’s speech in Astana, or rather, the part of it where he spoke about France. But judging by the fact that Paris dared to detain one of the accomplices of the attack on the Embassy of Azerbaijan in that country after all, and the French Ambassador to Azerbaijan finally spoke up, Paris has realized that the Azerbaijani authorities mean business and will not tolerate the insulting antics easily. We will also refrain from ironic speculations as to whether they believe that one article by the French ambassador published by an opposition news agency would be enough to make up for all their recent mess on the Azerbaijani track—if they really wanted to improve the climate of bilateral relations, would it not be more logical for the ambassador to go to Shusha? And, of course, we will not make any sarcastic remarks about whether Monsieur Gross said to himself before writing this article something like “I will save France and Azerbaijan’s relations and the credibility of French diplomacy!” and whether he thought of the cloth merchant Bonacieux with his “I will save France!” as he did so. After all, the ambassador acts strictly under the instructions received from the capital of his country, outlining the formulated position; he has very little room for personal maneuvering. And most likely, in full accordance with these instructions and guidelines, Monsieur Gross today is trying to present the success of the Prague meeting as almost a “special achievement” of France and its President Emmanuel Macron, who took part in the quadrilateral meeting in the Czech capital.

Well, we are compelled to recall that, first of all, by the time of the Prague meeting, several rounds of talks between President of Azerbaijan Ilham Aliyev, Prime Minister of Armenia Nikol Pashinyan and President of the European Council Charles Michel had already taken place without any involvement of Monsieur Macron, who came to the fully set table. Secondly, there are too many indications that in Prague Macron tried to put his “Napoleonic” plans in motion and enter the region through the “Armenian door”, primarily by means of the European monitoring mission, but the plan failed: Azerbaijan did not consent to it, and they have to work only with the Armenian side and bear all the expenses expected with this unilateral mandate.

Lastly and most importantly, both French President Macron and French Foreign Minister Colonna have voiced a number of, to put it politely, so one-sided, provocative and biased statements that there is no “Prague spirit” to speak of there—only “the spirit of an Armenian restaurant in Marseilles”, or rather, the desire of French politicians to secure the votes of local Armenians by all means. For that purpose, the “spirit of Prague” has been almost crushed, if it was there to begin with, and now the pro-Armenian activity of Paris threatens to destroy the bilateral relations of Azerbaijan and France, on which the predecessors of Monsieur Macron really worked for many decades, as well as the peace process in the region. If Paris really wants to contribute to the peace process in the region, then they should not mix diplomacy with an election campaign. And if they cannot draw a line at least for themselves, they had better not interfere with the process so that they do not have to be told where the door is.