Khojaly 30 years on – why is it still relevant?

Since the outset of my engagement with Azerbaijan in 2009, I became only too aware of the Khojaly Genocide, the worst single atrocity of the Armenian–Azerbaijani conflict over Nagorno-Karabakh. 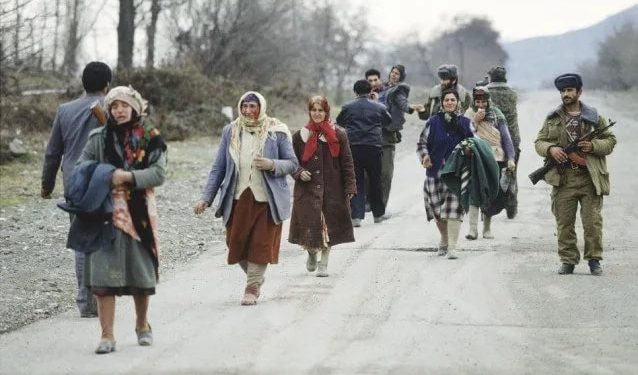 This saw 613 civilians – specifically women, children and elderly people – gunned down by Armenian forces, supported by the 366th CIS Motor-Rifle Regiment, which mainly comprised Armenians, as they fled one of the largest towns in Nagorno-Karabakh on the night of 25–26 February 1992. Needless to say, they had been guaranteed safe passage by the occupying Armenian forces, but curiously this message was inadequately relayed to the trigger-happy, bloodthirsty soldiers and mercenaries awaiting them as they forlornly attempted to escape across streams and hills in pitiful nocturnal conditions. The realities of the carnage were reported by many journalists and human rights groups, albeit briefly and lacking the essential information and context.

In an oft-reported interview with British journalist Thomas de Waal, military leader Serzh Sargsyan, who played a primary role in organising the so-called Defence Army for the illegal occupying Armenian forces, admitted that the decision to fire on civilians was a deliberate terrorist tactic, the objective being to coerce Azerbaijanis in Nagorno-Karabakh and the seven surrounding regions to relinquish their homes and lands to the occupiers and vacate the region without a struggle. He later became Armenian President for two terms and held numerous leading positions.

During my years of involvement with Azerbaijan, I helped organise, publicise and report on scores of commemorative events across Europe, all of which sought to raise awareness of the then unresolved nature of the Armenian­–Azerbaijani conflict and the humanitarian catastrophe of the estimated one million internally displaced persons (IDPs) and refugees emanating from the Armenian occupation. The majority of these were concerts, particularly relevant as many of the greatest exponents and composers of Azerbaijani mugham and classical music came from the territories under occupation. However, other activities included art installations and competitions and screenings of a powerful Lithuanian–US documentary entitled Endless Corridor, in which Lithuanian journalist Ricardas Lapaitis, who witnessed the immediate aftermath of the Khojaly Genocide, returned to the region after more than 20 years to meet the ghosts of the past and interview victims and perpetrators. In addition, the feature film Khoja, directed by Vahid Mustafayev ­­– brother of journalist Chingiz Mustafayev, who filmed the Khojaly victims’ bloodied corpses and was killed during the conflict – sought to personalise the indiscriminate nature of the genocide to seismic effect.

However, 2020 was a pivotal year in the history of the Armenian­–Azerbaijani conflict over Nagorno-Karabakh. Following an ill-fated attempt at further Armenian expansionism under the deluded Armenian Prime Minister Nikol Pashinyan, the 44-day Second Karabakh War saw Azerbaijani and Turkish forces collaborate, with some support from Israel, to reclaim Nagorno-Karabakh and the seven surrounding regions, Armenia having not received the anticipated Russian military support. A Russian-brokered ceasefire on 9 December 2020 resulted in an uneasy peace, with controversial Russian ‘peacekeepers’ being stationed on the Azerbaijani–Armenian border, albeit tempered by a token Turkish presence.

So, to all intents and purposes, the conflict is believed to be finished and Azerbaijani territorial integrity has been restored. Thus, why does remembering the Khojaly Genocide three decades on continue to matter?

Firstly, the perpetrators were never ever brought to justice. They committed a war crime and ethnic cleansing, the equal of that exacted in the former Yugoslavia, Rwanda or during World War II. If the International Court of Justice in The Hague could exert its powers to bring war criminals from these conflicts to account, decades after their crimes, then Serzh Sargsyan and other participants should also be tried and pay for their crimes by losing their liberty.

Secondly, it remains virtually impossible for the Azerbaijani IDPs from Khojaly and other liberated regions to return home. The Armenian side refused to release mine maps for months and their accuracy is doubtful. International pressure needs to be exerted on Armenia to release all maps and to guarantee their provenance.

Thirdly, it should be remembered that Russia has always historically supported Armenia, has two military installations on Armenian soil and has supplied it with weapons and training. It is clearly in Russian interests to broker the ceasefire and have its ‘peacekeeping’ forces on Azerbaijani territory. It would only take a more pro-Russian stance from Armenian Prime Minister Pashinyan or the ‘election’ of a Russophile Armenian leader for the seesaw to tip towards Armenia and reoccupation to result.

In short, Azerbaijan still needs to utilise the carnage of the Khojaly Genocide to make international organisations, notably the UN and NATO, aware of the unresolved loose ends of the conflict. Only when impartial peacekeepers sit on the Armenian–Azerbaijani border, demining occurs in all the liberated territories and the warmongers from three decades ago rot in jail can the IDPs return home. Then the Khojaly Genocide victims will truly rest in peace and this most dreadful incident will be consigned to the history books.