Landmines and hostages are hindering peace in Karabakh

The Second Karabakh War between Armenia and Azerbaijan changed the status quo in a protracted conflict that has lasted for decades. As a result of successful military operations, the Azerbaijani army liberated several districts and villages, including the cultural capital of Azerbaijan, Shusha city. 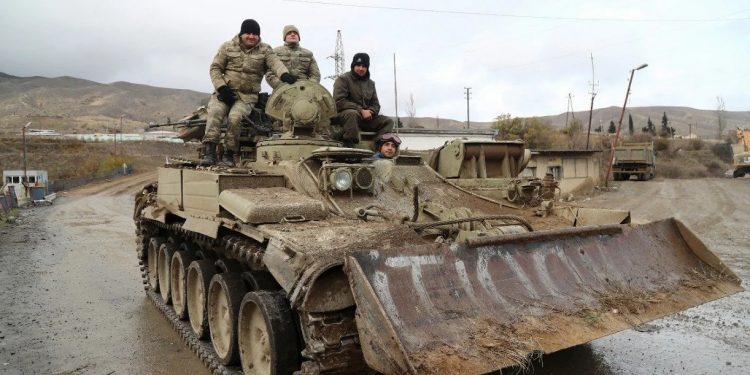 It is worth noting that, during the Second Karabakh War, the Azerbaijani and Armenian armed forces used all types of heavy weapons, including long-range missiles such as the Tochka-U, Scud-B, and Polonez. Some experts also claim that Armenia used Iskander-E missiles against Azerbaijan during the war.

However, the major turning point in the war was the effective use of unmanned aerial vehicles (UAV), such as the Turkish-made Bayraktar TB2 and Israeli Harops, by the Azerbaijani army. As a result, the Armenian armed forces suffered heavy losses, both in manpower and weapons. The military operations were stopped owing to Russian intervention on November 10, 2020, when Azerbaijan, Armenia, and Russia signed the Trilateral Agreement. With the November ceasefire agreement, Moscow became a key guarantor for the ceasefire and peace in the region. In accordance with the November Agreement, 1,960 armed troops, ninety armored vehicles, and 380 motor vehicles and special equipment units have been deployed to the Karabakh region. Moreover, the “Joint Russian-Turkish Center for Monitoring the Ceasefire” was opened in the Agdam region to monitor the implementation of the ceasefire.

Thus, the November ceasefire agreement became an important document that ended military operations. According to the agreement, Armenia pledged to return Agdam, Kalbajar, and Lachin districts to Azerbaijani control, while Azerbaijan guaranteed the security of the Lachin Corridor, to be used as a humanitarian connection between Armenia and Armenians in Karabakh.

One could argue that the main impulse for the normalization process during the post-conflict period is economic integration by opening all transport links as envisaged in the November peace agreement. This should be an efficient means for achieving durable peace and stability. Towards this end, a positive signal came on January 11, 2021, when the deputy prime ministers of Azerbaijan, Russia, and Armenia met in Moscow to discuss implementing the November deal’s clauses. This was the first trilateral meeting to discuss future peace in the region. They agreed to establish expert subgroups to deal with the provision of transport, including security, border, customs, sanitary, veterinary, and other types of control relating to rail, road, and combined transport.

Despite these positive dynamics, there are still challenges and difficulties in implementing all clauses of the November deal. The transit of Armenian armed forces and weapons through the Lachin corridor to Karabakh, as well as the Armenian armed forces’ withdrawal from Azerbaijani territories, are among the worrying signals. In addition, there are two main issues that Armenia and Azerbaijan have so far been unable to resolve. The first is the status of the sixty-two Armenian soldiers that Azerbaijani military forces captured in mid-December, a month after the signing of the peace deal. Those soldiers refused to accept the peace deal, continued military operations against the Azerbaijani army, and killed three servicemen and one civilian. In this regard, Baku accuses these soldiers of terrorism and, unlike the POWs who were returned home, has refused to hand them back to Armenia.

However, Azerbaijan recently released a Lebanese citizen, Maral Najaryan, who was previously detained in Karabakh. She entered Azerbaijani territory illegally, thereby violating Azerbaijan law. In addition, Baku has already returned the bodies of 1,400 Armenian military servicemen, facilitated humanitarian aid to the Armenian community of Karabakh, permitted Armenians to visit the Khudavang Monastery in the Kalbajar region of Azerbaijan, and, last but not least, allowed the transportation of Russian natural gas to Armenia via Azerbaijan. By these acts, Baku has shown its goodwill and readiness for future reconciliation. In the meantime, Azerbaijan is demanding that Armenia provide maps of minefields.

It should be highlighted that, after the end of the war, the landmine legacy is a significant challenge in the post-conflict period. The Karabakh region has one of the largest mine contamination problems in the post-Soviet space, and it is very difficult to remove all landmines without maps of the minefields. The Armenian refusal to provide maps of the minefields to Azerbaijan could undermine future peace efforts.

Azerbaijan has already started demining operations throughout the region. According to the Azerbaijan National Agency for Mine Action (ANAMA), since the forty-four-day war, at least 750 unexploded missiles and rockets, 4,500 anti-personnel mines, and 2,000 anti-tank mines have been found and destroyed. It should be noted that demining operations are carried out manually, through demining machines, and with the help of mine detection dogs. In order to improve demining performance and to enhance the safety of de-mining personnel, Azerbaijan has received twenty new, modern MEMATTs (Mechanical Mine Clearing Equipment) from Turkey. Additionally, Turkish mine-clearance experts are training their Azerbaijani counterparts as well as taking part in demining operations.

It is clear that demining efforts in the liberated areas are highly important for Azerbaijan to develop infrastructure and start the settlement plan. Anti-personal landmines continue to pose a major threat to human life in the liberated territories. According to Azerbaijan’s Prosecutor General’s Office, mine explosions have killed fourteen Azerbaijanis, including five Azerbaijani soldiers, since the November deal. Moreover, fifty-two soldiers and eight civilians have been injured as a result of mine explosions. It is clear that many civilians have been falling victim to anti-personal mines during the post-conflict period.

It should be noted that a complete mine clearance of the liberated territories is crucial for sustainable development and the region’s revival. It is exactly this process that will affect the settlement of Azerbaijani internally displaced persons (IDPs) and the region’s economic integration process. Therefore, Azerbaijan is cooperating with the United Nations and other international organizations to accelerate de-mining operations. The UN has provided $2 million to support the emergency humanitarian response in conflict-affected areas of Azerbaijan. With an additional $1 million from United Nations Development Programme (UNDP) Crisis Response and the UN’s Central Emergency Response Fund, UNDP will provide support to ANAMA to train, equip, and deploy emergency response teams to clear mines and unexploded bombs that pose risks to local communities living in conflict-affected areas.

The scale of the contamination by landmines and other types of unexploded ordnance is large; it will, therefore, take several years to completely clear the territory and, without access to maps of the minefields, demining operations become very difficult. Armenia should provide minefield maps to Azerbaijan and to peacekeepers as an indication of its intention for peace. Such action will accelerate demining operations and enhance mutual trust between the parties.

In the end, strengthening the post-conflict demining efforts is significant, and Armenia can help Azerbaijan by providing minefield maps. That is the most effective way to support peaceful coexistence as well as to address humanitarian concerns in the region. Additionally, Azerbaijan should support mine-risk education and capacity building across the region in order to reduce risks of future human casualties as well as increase the share of land used for agriculture and housing.