Belarus President Aleksandr Lukashenko paid a visit to Azerbaijan on 13-14 April. The head of state was scheduled to visit the country and discuss bilateral relations with its leader Ilham Aliyev at the end of last year. But the visit had to be postponed, though not for long. 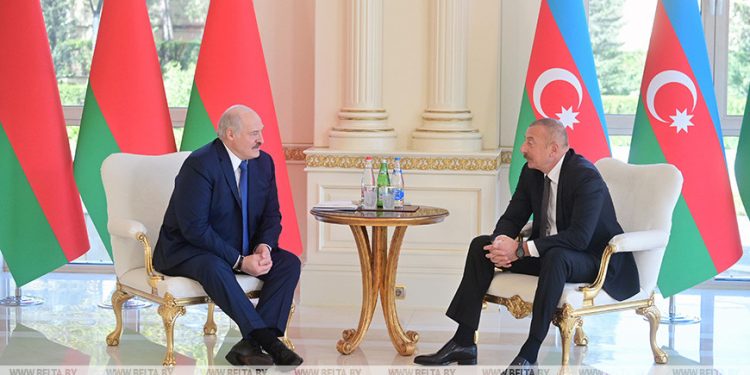 “However, true friends do not postpone the things that should be done on time. No pandemic can prevent this,” Aleksandr Lukashenko said later during the talks. Bu first things first.

The Belarusian president became the first foreign leader to visit Azerbaijan this year. Due to the quarantine measures in the country, the number of official events had to be reduced and the status of the visit downgraded to a working visit. Yet the agenda was still packed. Judging the length of the negotiations, the presidents did have a lot to discuss and were satisfied with the outcome.

Aleksandr Lukashenko headed to the first meeting with his Azerbaijani counterpart immediately upon arrival in Baku. The meeting was informal and lasted several hours. The presidents talked tete-a-tete, so we could only imagine what exactly the presidents discussed behind closed doors. “We had the opportunity to talk in an informal setting, to discuss a wide range of issues on the bilateral agenda, regional issues,” Ilham Aliyev told the media later though he did not go into details.

Prior to Alexander Lukashenko’s visit, a delegation of Belarusian ministers arrived in Baku on a night flight to discuss industry-wise issues with their Azerbaijani counterparts and sign commercial contracts. “We signed a contract to supply 550 tractors. The contract is worth about $9 million,” Belarusian Industry Minister Piotr Parkhomchik said.

Tractor kits will be assembled at Ganja Automobile Plant. Since 2007, the plant has assembled more than 11,500 Belarusian tractors and about 3,500 MAZ, Amkodor, Belkommunmash and Gomselmash vehicles.

Production of Belarusian electric buses may be set up in Azerbaijan. The country wants to produce passenger electric vehicles locally. Therefore, trials are already underway.

Official talks took place the following day, 14 July. The heads of state met at the Zagulba Palace, which is located on the sunny shores of the Caspian Sea. By the way, before the talks the delegations had to take a test for coronavirus in the evening in the hotel and at the palace in the morning. According to our observations, no one tested positive.

By tradition, the meeting of the two leaders began in a narrow format, only the foreign ministers were invited to attend. During the meeting the presidents had an opportunity to enjoy an incredibly picturesque seaside view. That was probably the best setting for negotiations.

As he welcomed the Belarusian head of state, the president of Azerbaijan noted that the countries successfully develop cooperation in politics and economy. According to him, cooperation between Belarus and Azerbaijan has gained momentum and is developing in all areas.

“Our relations are not burdened with any problems at all. Regular contacts enable us to take stock of joint activities, outline further steps, and move forward as two friends, two partners,” he added.

“Our meeting is taking place against the background of the pandemic and all kinds of other events. However, true friends do not postpone the things that should be done on time. No pandemic can prevent this,” Aleksandr Lukashenko said.

In 2020 the trade between Belarus and Azerbaijan approached half a billion dollars. According to Aleksandr Lukashenko, the two countries made good progress in this respect. “With regard to our political relations, it is difficult to say what is missing. We have a brilliant relationship. I have always been proud of that. We have restored the warmest relations since the Soviet Union in all areas,” the president emphasized.

In the presence of journalists, the Belarusian head of state touched upon such a sensitive issue as the delivery of crude hydrocarbons. The president suggested expanding cooperation in this matter. “Probably, we need to mull over the enhancement of cooperation in this field. Of course, this is a very delicate and sensitive issue, for Belarus is in the midst of economic and political events. However, there are no unmanageable issues,” Aleksandr Lukashenko said.

Aleksandr Lukashenko offered Belarus’ support to rebuild the territories affected by the recent conflict. “We talked about it a lot yesterday. I am very glad that being a true friend of Belarusian people, you realize that there is so much more work ahead. Hard work, peaceful work,” the head of state noted. “You should keep in mind that you can count on Belarus. You know what we can do,” the president added.

Taking into account that the two presidents had an informal five-hour one-on-one conversation a day before, they did not want to hurry up the negotiating process. Meanwhile, ministers could share the details of meetings with their counterparts with journalists. According to Agriculture and Food Minister Ivan Krupko, the ministries of Belarus and Azerbaijan will soon put together a ‘serious group’ to deal with food supplies, cooperation in education and establishment of joint ventures to produce veterinary drugs. This area of work is no less serious than the manufacturing industry: from 2016 to 2020, the supplies of Belarusian food and agricultural products increased from $6 million to $30 million.

The delegations joined the talks after a while. Journalists were only allowed to take photos of the meeting. The presidents shared the details of the discussions later during a press conference. The Azerbaijan leader was the first to speak: “Our relations are time-tested and have a very long history. We have never had any unresolved issues .”

According to him, during the talks the co-chairpersons of the intergovernmental commission reported on the work done and determined the areas of cooperation to diversify and increase commodity trade. It is no secret that the amount of trade between Belarus and Azerbaijan often depends on the volume of oil supplies. Ilham Aliyev stated that cooperation in this direction will continue. Apparently, it was a public response to the offer made earlier by the Belarusian head of state. “I think we will significantly exceed the level of the last year’s supplies. The route has been tested, and the project is mutually beneficial. We aim to expand cooperation in the energy sector, which means going far beyond the supply of crude oil to the Belarusian refineries,” the president of Azerbaijan said.

The parties also discussed the participation of Belarusian companies in the reconstruction of the territories affected by the Nagorno-Karabakh conflict, including the construction of housing, infrastructure, and enterprises. Considering that these are mainly agricultural lands, the Belarusian experience will be very useful here. The country is ready to assist in the construction of agricultural enterprises, agro-towns and other infrastructure, and also in personnel training and the supply of industrial and passenger vehicles.

The outcome of the conflict in Nagorno-Karabakh received a lot of attention during the talks. This is a complex topic, another sensitive issue on the international agenda for many countries, not only those situated in the region.

On the eve of the visit some Telegram channels tried, as usual, to stir things up: who would the Belarusian president congratulate in this situation? The head of state gave a clear answer.

“We sincerely welcome the agreement on a complete cessation of hostilities in the Nagorno-Karabakh conflict zone. This is an important political decision which should pave the way for lasting peace in the region. I would like to congratulate the people of Azerbaijan and the people of Armenia on the end of this terrible tragedy, which lasted 30 years,” Aleksandr Lukashenko said.

The president said that his position is well known to everyone: he has always supported the people in this conflict. “I always asked whether the people in Karabakh were happy to live there, as if sitting on a powder keg? Were they happy? This problem needed solving. Today I would like to sincerely congratulate both the people of Azerbaijan and the people of Armenia on the end of this sad period in their history.”