Matthew Bryza: “He told me that the relationship between Iran and Azerbaijan was a ‘war, just without armed clashes’.”

The Zangezur corridor is very important for Baku because it connects Nakhchivan and the "mainland" Azerbaijan. 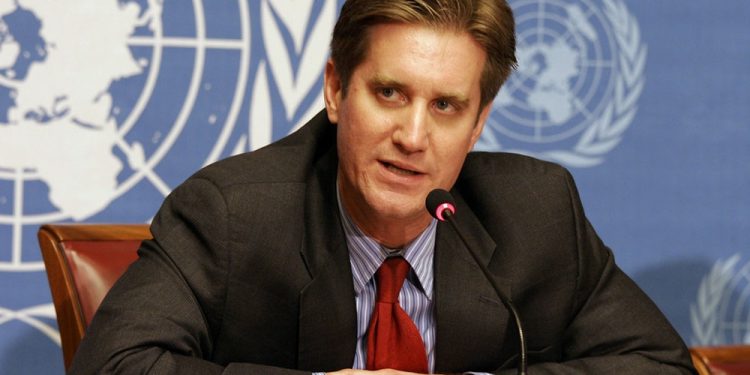 What is the situation in the South Caucasus and how will the geopolitical positions in this region be distributed in the future? We can debate on this topic endlessly, but one thing is clear and indisputable: the distribution of roles in the region is changing, and in many respects, this was made possible by Azerbaijan’s victory in the 44-day war.

Matthew Bryza, former US Co-Chair to the OSCE Minsk Group and former US Ambassador to Azerbaijan, speculates on the possible development of Azerbaijan’s relations with Armenia and Iran, whether the OSCE MG has a future and when the Zangezur corridor will be launched.

What is stopping Yerevan from signing a peace treaty with Baku now? We see that the situation is contradictory: on the one hand, the Armenian leadership declares its willingness to engage and even sign a peace treaty, on the other hand, armed provocations keep happening on the Azerbaijan-Armenia border, and Azerbaijani soldiers are being killed in Karabakh, while Russia remains passive and makes no real attempts to remove illegal Armenian armed groups from the area of responsibility of the Russian peacekeepers. Who do you think is hindering the signing of a peace treaty?

I believe Nikol Pashinyan sincerely wants to sign a peace treaty, but, as you know, there is a strong and armed opposition in Armenia. We are all aware that after the war and the signing of the November 10 statement, Pashinyan was threatened with physical elimination. This threat is real, and this armed opposition, to put it mildly, does not like the statement of November 10, seeking to cancel or discard this agreement, and, in my opinion, they are the ones behind the armed provocations on the border now.

Why Moscow still won’t remove illegal Armenian armed groups from the area of responsibility of the peacekeepers is, first of all, a question for Russia. But I can hazard a guess. In my opinion, there are two possible reasons: the first is that Russia does not want to clash with the Armenian groups and is avoiding this scenario, the second is that the unstable situation in Azerbaijan benefits President Putin, because he has political leverage over Azerbaijan to use as he wants.

As for those in Armenia who hinder the signing of a peace treaty, they are the political opposition. The opposition is against the treaty, and they want this part of Karabakh to have a new legal status. But as we know, President Aliyev said that the issue of status was no longer relevant. Thus, there are serious obstacles to the implementation of these plans of the Armenian separatists.

It is hard to say how the situation will unfold. As for the Minsk Group, as Ilham Aliyev pointed out at the conference in Baku in April, which I attended, the Minsk Group could help in the issues of demarcation and delimitation of the Azerbaijan-Armenia border. And I too believe that the detailed determination of the border line is an important next step, and Pashinyan’s domestic policy will only benefit from it, in particular, it will help to open all transport corridors, as there will no longer be any visible obstacles for this.

I believe this is how, step by step, the tension between Azerbaijan and Armenia will ease, and Yerevan may get involved in the integration processes in the South Caucasus. Yes, I know that this is quite an optimistic scenario of the region’s future. But I am an optimist, because I am a former diplomat, and if I were not an optimist, I probably would not have become a diplomat either.

The Zangezur corridor is very important for Baku because it connects Nakhchivan and the “mainland” Azerbaijan. And this can open many areas for investment, for economic growth, both in Azerbaijan itself and in the neighboring countries. In particular, it can launch new vectors of transport flows between Asia and the Caspian region, Europe and world markets. I cannot stress this enough: Armenia itself will benefit from the potential for the growth of economic opportunities, which will materialize immediately after the Zangezur corridor has been opened.

For example, in Turkey, where I live now, I have many businessman friends who are willing to invest a lot of money in Azerbaijan and Armenia, let’s say, in the prospects of new opportunities. In this regard, it will be possible, in my opinion, to create separate industrial and economic zones in the South Caucasus. One of such zones, for example, could be created in Nakhchivan and include the territories of Azerbaijan, Turkey and Armenia: the new Zangezur corridor is what will make it possible. I also think that a new gas pipeline could be laid along the Zangezur corridor, and thus natural gas could be used to develop the chemical industry in Nakhchivan. Such a zone could be integrated into a single space with similar industrial zones in Turkey and even in Kazakhstan.

But there are also those against the Zangezur corridor, in particular, Iran. After all, many dishonest Iranian businessmen have been taking advantage of the situation for many years, making colossal profits from the illegal trade between Iran and the Armenians living in the occupied Azerbaijani lands. Now Azerbaijan has taken control of these routes and put an end to illegal trade. Now all these dodgy businessmen will have to pay taxes to Azerbaijan. Globally speaking, from a strategic point of view, this corridor will contribute to economic growth and development of the entire region, all neighboring countries except those who are against peace in the region.

What do you think is the current role of the OSCE Minsk Group? Many have a very ambiguous opinion of it. Is this format even necessary and effective for solving the issues of the region?

I cannot quite agree with the overly critical views on the work of the OSCE Minsk Group in all these years, including those who call the policy of the Minsk Group “pro-Armenian”.

The members of the Minsk Group, including myself when I was a co-chair, have always tried to work out unbiased solutions, taking into account the opinions of both parties. Unfortunately, there is always a danger of such solutions being unpopular with either. And during my years in the OSCE Minsk Group, some in Azerbaijan even wanted to make me persona non grata in the country. But you know what happened when President Obama appointed me US ambassador to Azerbaijan: the Armenian diaspora in the US actively protested against this appointment, calling me “pro-Azerbaijani.” How could I be pro-Azerbaijani and pro-Armenian at the same time? So, I can say that I and my colleagues from France and Russia have always tried to be objective.

Yes, I understand that Azerbaijan does not recognize the status of Karabakh, because Azerbaijan won the war and decide the situation as the winner. And the OSCE Minsk Group is now trying to tread the “troubled waters” of this political “sea”. My opinion is that the Minsk Group should not deal with the issue of “the status of Karabakh”, as this is a rather painful issue. But the OSCE MG diplomats could focus instead on preparing a peace treaty between Azerbaijan and Armenia—the group was established for this exact purpose originally. And, within the framework of this process, they could also contribute to the process of demarcation and delimitation, as Ilham Aliyev advised.

And I think that since such a group already exists, why not use its resources to find a peaceful consensus? There is, of course, another matter: what to do if one of the co-chairs, France, has always spoken so openly in support of one of the sides, Armenia? This undermines the objectivity of the Minsk Group and makes one wonder that perhaps the composition of the Minsk Group should be revised and changed.

As you know, the Azerbaijan-Iran relations are going through hard times. What do you think is the future of these relations? What is the reason for Iran’s aggressive rhetoric: the Iran-Russia drug trafficking blocked by Baku, the strengthening of Azerbaijan’s role in the region after the 44-day war, US and Israeli pressure on Iran, or, on the contrary, the US weakness and withdrawal from the Middle East, for example, from Afghanistan?

The future of the relationship between Iran and Azerbaijan is not easy to predict and largely depends on what Tehran will do. The new Iranian government is rather conservative and little inclined to agreement: it is willing to head for a confrontation with Azerbaijan, the United States, and other countries. There are many reasons for this. I believe the new President Raisi wants to prove to the ethnic Azerbaijani population of Iran that they cannot hold rallies in support of Baku. Tehran sees those rallies as a direct threat of separatism. This may be one of the reasons Iran is confrontational with Azerbaijan.

As for drug trafficking, I too think that there are many forces in Iran and Russia that are dissatisfied with the blocking of these drug flows through Azerbaijan, this dissatisfaction being lobbied at the highest level.

But I remember talking to a friend, a high-ranking Azerbaijani official, when I left the post of the US Ambassador to Azerbaijan. Note that the conversation took place around 2011. He told me then that the relationship between Iran and Azerbaijan was “a war, just without armed clashes.” That is, the tensions between the countries ran very high even back then. And, as a former US ambassador to Azerbaijan, I know that Iran was conducting, diplomatically speaking, very dangerous “operations” in Azerbaijan’s territory at that time. The relations between the two countries improved later, and now that the new forces came to power in Iran, they have become strained again.

Today Tehran is reacting very emotionally to everything that is happening in Azerbaijan. The reaction to the military exercises conducted by Turkey, Azerbaijan and Pakistan turned out to be particularly emotional. But, in general, I think, the Azerbaijan-Iran relations stabilized and improved around the time after the end of my posting in Azerbaijan, the level of political emotional intensity decreased appreciably, and I believe that these relations will stabilize again.

I think that Azerbaijan now has a historic chance to determine how it wants to see its relations with Iran, without the interference on the part of Russia, the United States or other players. Yes, there are US, Russian, Turkish interests in the region, as well as interests of other parties, but, as a strong, independent state, Azerbaijan is in a position to decide for itself how it sees the future of these relations.