Mines and border disputes undermine peace efforts in the region

Currently, the border dispute between Armenia and Azerbaijan, including the most recent tensions in the Syunik region (Zangezur in Azerbaijani), has raised the question of security and durable peace in the region. Moreover, Armenia’s upcoming elections in June 2021 are transforming the situation in the country into deep political turmoil. 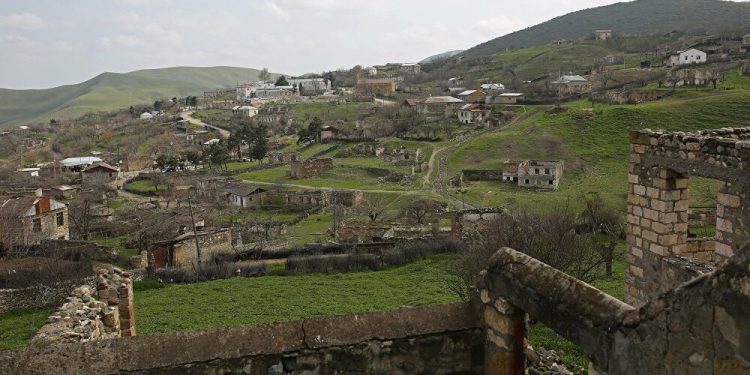 It is worth noting that 23 political parties and 4 alliances submitted documents to the Armenian Central Electoral Commission ahead of snap parliamentary elections.

It is obvious that the main struggle for power will be between candidates of the “Civil Contract party”, led by caretaker Prime Minister Nikol Pashinyan, and “Armenia Alliance”, led by Armenia’s second president Robert Kocharyan. Currently, the political crisis in Armenia has led to escalations on the border with Azerbaijan, as the two countries cannot agree on border delimitation and demarcation. Official Baku has already started the process of demarcation using Soviet maps and invited Armenia to discuss all disagreements and disputed issues through political-diplomatic talks. After the November agreement, seven villages in the Gazakh district and Kerki village in the Nakhchivan Autonomous Republic of Azerbaijan are still under Armenian control. Azerbaijan’s Foreign Ministry statement underlined that “Measures to strengthen the border protection system implemented within the territorial integrity of Azerbaijan are carried out based on maps available to each of the sides that define the borderline between Armenia and Azerbaijan.”

After the Azerbaijani Armed Forces moved their positions in the Syunik region forward after the snowmelt, escalation between Armenian and Azerbaijani troops became unavoidable. Various video materials show how Azerbaijani and Armenian troops engaged in hand-to-hand combat. Such incidents show the importance of the delimitation and demarcation process between the two South Caucasus countries.

During his pre-election campaign in the Syunik region, Robert Kocharyan touched upon Azerbaijani–Armenian relations after the Second Karabakh war. The November agreement between Azerbaijan, Armenia, and the Russian Federation envisages opening transport links in the region. In this regard, the Zangezur corridor is a very important transport route for connecting the Nakhchivan Autonomous Republic of Azerbaijan with the country’s main territory. However, Robert Kocharyan’s position on this important issue shows an unconstructive security and regional economic integration approach. According to him, the “opening of a transport corridor through Armenian Syunik in Azerbaijan’s view would mean limiting Armenia’s sovereignty fixing the levers of influence.”

Against the background of recent events in the Syunik region, the leaders of Armenia’s opposition accused Nikol Pashinyan’s government of failing to provide security in the border regions. In addition, the status of Armenian captives in Azerbaijan is like the sword of Damocles hanging over Nikol Pashinyan. Relations between Armenia and Azerbaijan became even more strained following the arrests of six Armenian soldiers on May 27. The Azerbaijani Defense Ministry accused the Armenian captives of trying to cross the border in the Kalbajar region to mine the Azerbaijani army’s supply routes. On June 8, another Armenian soldier was arrested in the Lachin region of Azerbaijan. However, this captured soldier was returned to Armenia after an investigation by the Azerbaijani side. This shows that Azerbaijan is not interested in border escalation and is prepared to solve all disagreements through negotiation.

Touching upon the issue of Armenian soldiers during his pre-election rally in the Mets Mantash community in the Shirak region, Nikol Pashinyan said, “I have instructed our agencies concerned to officially address the Azerbaijani side with a statement [that] my son is ready to go to Baku in exchange for Armenian saboteurs.” Perhaps Pashinyan’s statement is a political move to gain public support. But, unfortunately, Armenia’s position damages the peace process and promoting its revanchist ideology could lead to a further escalation of the situation.

During the post-conflict period, another challenge to relations is the landmine problem in the liberated regions. Mine contamination in the Karabakh region significantly affects the reconstruction process as well as killing civilians and servicemen. Azerbaijan has already started demining operations in the liberated areas using modern mine clearance techniques and technologies. Turkish and UK counter-explosive experts train Azerbaijani colleagues to eliminate the threat of mine explosions. Unfortunately, despite the demining efforts in the region, civilians continue to be injured and die in mine explosions. For example, another mine explosion occurred on June 4, when three people, including two journalists, were killed and four wounded in an anti-tank mine explosion in the Kalbajar region.

This event shows that mine clearance is the most important work ongoing in the Karabakh region because landmines pose a major threat to human life. According to the Azerbaijani Prosecutor General’s Office, since the end of the Second Karabakh War, 20 Azerbaijani civilians and 7 soldiers have been killed, and 86 soldiers and 29 civilians wounded in mine explosions. Complete mine clearance from the liberated territories is a significant factor for the settlement of the Azerbaijani internally displaced persons (IDPs) in those regions. The scale of the mine-contaminated areas in the liberated regions is large. Therefore, it will be very difficult to remove widespread antipersonnel and anti-tank mines without maps of the mines. The Armenian refusal to hand over such maps combined with further mine explosions will raise tensions in Armenian–Azerbaijani relations.

Today, the international community must support peace efforts in the region because durable peace and security could support transportation and energy connectivity in the region. The end of the Second Karabakh War created a window of opportunity for large-scale infrastructure projects. However, as mentioned above, demarcation and delimitation of state borders and landmine clearance are key challenges to security. The Armenian government must understand that there is no bright future without regional economic integration, and recognition of the territorial integrity of Azerbaijan is the means to sustainable peace. Former Armenian President Levon Ter-Petrosyan noted, “There is no alternative to the recognition of the Soviet borders between Armenia and Azerbaijan. Nothing can be changed here. The border between Armenia and Azerbaijan is the Soviet border.”

The international organizations and countries should request minefield maps from Armenia as well as support the border delimitation process. For instance, the U.S.A. calls on Azerbaijan and Armenia to start boundary delimitation based on Soviet maps. During his visit to Azerbaijan, Philip Ricker, Assistant U.S. Secretary of State, emphasized the strategic partnership between Azerbaijan and the U.S.A. and the importance of cross-border de-escalation between Azerbaijan and Armenia. To support the regional security and integration process, official Washington should intensify its policy in the South Caucasus. In this regard, the 3+1 cooperation format (Georgia, Armenia, and Azerbaijan + the U.S.A.) could be an effective mechanism to support security and economic integration. To support this idea, it is worth mentioning that Azerbaijan has handed over 15 Armenian detainees in exchange for minefield maps of nearly 97 000 anti-personnel and anti-tank mines in the Agdam region after the U.S.A.’s constructive engagement and assistance. It shows that the U.S.A.’s active engagement in the region is very helpful. The U.S.A. has already established such a format in Central Asia. “C5+1” The ministerial for the Foreign Ministers of Kazakhstan, Kyrgyz Republic, Tajikistan, Turkmenistan, and Uzbekistan enhances cooperation and coordination with, and among, Central Asian countries plus the United States.

In the end, because of the many challenges resulting from the Second Karabakh War, Armenia’s June parliamentary election will create new dynamics for the post-conflict period. If Armenia shows goodwill by providing all minefield maps to Azerbaijan, it will be a huge step for the reconciliation process, and the signing of an Armenian–Azerbaijani peace agreement and mutual recognition of territorial integrity would fundamentally change the region.