Aleksandar Vucic met today with Jeyhun Bayramov in the building of the General Secretariat of the President of the Republic. An important meeting between the president of Serbia with the minister of Foreign Affairs of Azerbaijan has been held. 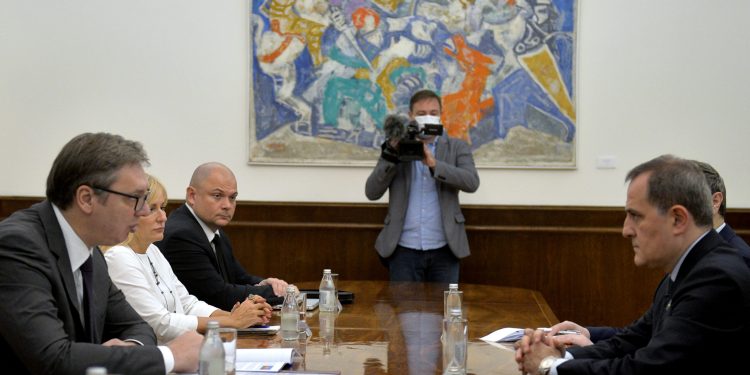 President of the Republic of Serbia Aleksandar Vucic today received Minister of Foreign Affairs of the Republic of Azerbaijan Jeyhun Bayramov, and expressed particular satisfaction that Serbia, together with Azerbaijan, as co-chairs of the Non-Aligned Movement, organized an important summit in Belgrade – to mark the 60th anniversary of its founding.

Minister Bayramov relayed the greetings of President Aliyev and said that Azerbaijan greatly appreciates Serbia’s engagement in jointly organizing a very successful conference, according to the highest standards, in difficult conditions due to the pandemic.

President Vucic extended his own greetings and expressed hope that President Aliyev would visit our country soon and said that Serbia attaches special importance to the strategic partnership with Azerbaijan.

The two interlocutors agreed that in the coming period we need to work together to strengthen economic and any other cooperation and stressed the importance that the visa-free regime agreement has for establishing ties between the two countries.

President Vucic also said that the two countries are connected by their commitment to firmly respecting international law, and in that regard, he expressed gratitude to Azerbaijan for respecting the territorial integrity and sovereignty of Serbia. Minister Bayramov reiterated that the position of Azerbaijan on that issue is firm and consistent.