Many Russian analysts are dismissive of Turkey’s talk about the formation of a transnational cultural community called “Greater Turan.” They do not believe such a notion will really attract Azerbaijanis let alone Central Asians, not to speak of the Turkic peoples living in the Russian Federation. 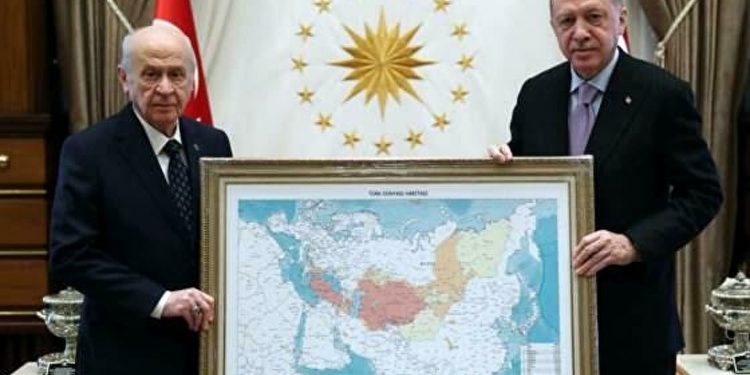 But Kamran Gasanov of Moscow’s Friendship of the Peoples University argues that this longstanding Turkish idea is every bit as powerful among Turkic peoples as the Russian World is among Russians. Unfortunately, he insists, the flippant Russian attitudes, expressed most forcefully in recent times by Valdai Club political analyst Farkhad Ibragimov, ignore the fact that while Greater Turan in some ways is, indeed, nebulous and undefined, that lack of clarity is a source of its strength as an identity around which not only the Turks of the world but other related peoples can coalesce (Svobodnaya Pressa, July 1).

“The conception [of Greater Turan] exists in the mind just as does ‘the Russian World,’ ” Gasanov said last summer, in an interview with Svobodnaya Pressa. It is not part of any official documents of the government of Turkey,” but it informs how Turkish officials view the world and the policies they pursue. “In principle, the plan is a real one. Azerbaijan’s role in it is to serve as a trampoline for Turkish expansion into our North Caucasus and into Central Asia.” Moscow needs to recognize this reality, the analyst contended. If it waits too long, it may find itself on the outside looking in, even on its own territory (Svobodnaya Pressa, July 1). A major reason Gasanov and other Russian analysts have been talking about Greater Turan is that the idea includes not only Turkic peoples (which pan-Turkism appeals to) but Finno-Ugric ones as well. Any movement that unites those two groups would, thus, threaten not only Russia’s influence in the Caucasus and Central Asia but also Moscow’s control of both Turkic and Finno-Ugric areas within the current borders of the Russian Federation. Together, Turkic and Finno-Ugric peoples, usually viewed as completely separate, populate nearly half of that country.

Russia is not the only state threatened by Turan, of course. Iran obviously does not want to see this kind of Turkic expansion. In the longer term, China does not either—not only because of the Turkic peoples within its borders (most notably Uighurs, Kazakhs and others) but also because of Beijing’s hopes to eventually emerge as the dominant player in Central Asia and the South Caucasus. But Russia is more vulnerable than any other country. Russian scholars and officials are now beginning to pay additional attention to contemporary Turanism (Yandex Zen, December 23, 2020), and a Russian-language portal devoted to the subject has sprung up—TuranToday.com. Indeed, the intellectual argument between Ibragimov and Gasanov suggests that debates about something few in the West currently pay much attention to are assuming an ever-greater share of Moscow’s thinking.

Over the last few months, the issue of Greater Turan has heated up in Moscow. Analysts there fear that Turkey has been emboldened by Azerbaijan’s 2020 victory over Armenia and that Ankara will back Baku in seeking to gain control of the Zangezur corridor, which would provide Turkey with a direct land link through the South Caucasus to Central Asia (Regnum, September 16; see EDM, December 14). Additionally, they have been alarmed by the continued evolution of the Turkish-led Organization of Turkic States (formerly known as the Cooperation Council of Turkic Speaking States, or “Turkic Council”), which, in the Russians’ view, is positioning itself as an alternative to the Moscow-dominated Commonwealth of Independent States (CIS), Eurasian Economic Community, and the Collective Security Treaty Organization (CSTO); moreover, Russian experts bemoan Turkey’s sale of military drones to Kazakhstan (TRT, December 7; Regnum, September 16). On top of that, both experts and officials from Russia have been upset by pictures of the Turkish president standing before a map showing the “Turkic World,” which includes large swaths of Russia (Gazeta.ru, November 21). Consequently, talk in Turkey and in other Turkic states about Greater Turan—a region that notably includes far more than just Turkic peoples—has been ringing alarm bells in the Russian capital.

Artyom Ignatyev, a commentator for the Strategic Culture Foundation (a Russian government–linked think tank—State.gov, August 2020), asserts that what is happening now is the outcome of a longstanding trend in Turkish thinking, which Moscow has no choice but to consider. Otherwise, he argues, Russia stands to lose even more influence in the Caucasus and Central Asia and be threatened on its territory as well (Fondsk.ru, December 12).

During the Cold War, Turkey was blocked from pursuing its expansionist dreams, Ignatyev maintains. But since the demise of the Soviet Union, Ankara has enjoyed a remarkably free hand. And what Moscow must recognize, he argues, is that Turkey’s activities, especially its promotion of Greater Turan, are part of the North Atlantic Treaty Organization’s (NATO) strategy designed to weaken Russia abroad and at home. A year ago, Turkey expanded its notion of “one people, two states,” which it has promoted to describe Turkish-Azerbaijani relations, to the idea of “one people, five states”—to include not only Azerbaijan but the four Turkic countries of post-Soviet Central Asia. And with the development of the Organization of Turkic States (Fondsk.ru, November 16), it is becoming increasingly likely, Ignatyev writes, that this multilateral grouping will not limit itself to cultural issues but may increasingly tackle economic, social-political and even security matters (T.me/russicatop, August 29). Indeed, a new concept paper about the future of Turkic unity, penned by former Kazakhstani president Nursultan Nazarbayev, says as much (Regnum, August 23).

Yet what Ignatyev finds particularly worrisome is that the Organization of Turkic States is not limiting itself to the Turkic world. It is maintaining close ties with Hungary (the country’s “Observer” status has been grandfathered in following the transformation of the Turkic Council into the Organization of Turkic States—see EDM, November 17), which along with Turkey is also a NATO member, and Ukraine (likely to receive “Partner” status), which is using the Crimean Tatars as the basis for Kyiv’s involvement with the Turkic world. All this shows that “the ambitions of ‘Great Turan’ involve not only the Turkic peoples,” Ignatyev concludes. That makes it an especially dangerous threat to Russia abroad and at home, one that the West will use at a time of increasing tensions between Russia and NATO. Moscow must counter all this now, the Russian analyst says, lest Ankara’s ambitions, which cannot be achieved by direct military action, are realized via its soft power methods, including, in particular, the idea of Greater Turan.