The Brussels moment of the Armenian-Azerbaijani post-war peace process

The Brussels meeting of the Armenian and Azerbaijani leaders was an important development.  The outcomes of this meeting and, in general, the results of the past year give ground to hope that the next year will bring more peace and cooperation to the Armenia – Azerbaijan relations. 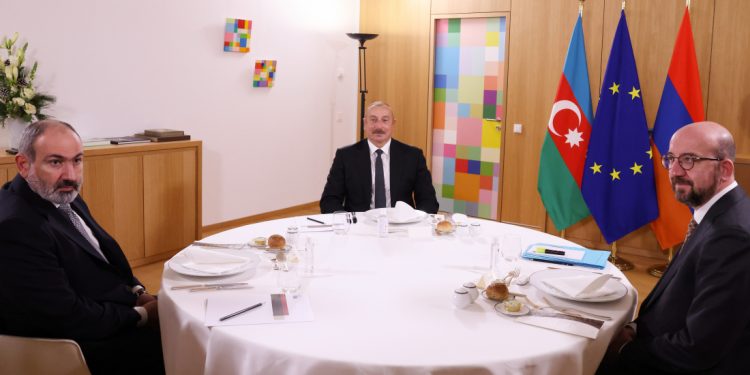 On December 14, Brussels hosted the first EU-mediated meeting of the Armenian and Azerbaijani leaders since the 44 Day Karabakh War of 2020. Organized on the sidelines of the summit of the Eastern Partnership Programme with the participation of the European Council President Charles Michel, the outcomes of the meeting were of great importance for a number of reasons.

First of all, the EU-Armenia-Azerbaijan trilateral meeting in Brussels presented a new format for the post-war peace negotiations between the sides. This is a remarkable development against the backdrop of declining role of the Minsk Group of the OSCE and the Russia’s emergence as the sole powerbroker in the post-war peace process. For Azerbaijan, the EU would be a more desirable mediator than the Minsk Group which had proved to be rather ineffective and often controversial due to the embedded pro-Armenian bias in the policies of France, one of the co-chairs of the group along with the United States and Russia.

The Brussels meeting also delineated the agenda of the EU mediation. Based on the outcomes of the meeting and the subsequent statements, we can infer that the EU’s mediation is instrumental more in the settlement of “soft issues” like those of humanitarian or economic nature. In this regard, the fact that no documents were adopted as a result of the meeting, unlike the two Russia-mediated trilateral meetings (January 11 and November 26) that produced programmatic documents with clear objectives, is a telling detail.

The settlement of more fundamental issues is likely to remain as the exclusive sphere of Russia’s engagement. The EU statement issued after the Michel-Aliyev-Pashinyan meeting states that “Prime Minister Pashinyan and President Aliyev reconfirmed that key commitments undertaken in the framework of the two trilateral statements of 9 November 2020 and 11 January 2021 would be honoured and that understandings reached in Sochi on 26 November 2021 should be built upon”.

All this can create a unique situation in the territory of the Eastern Partnership – where the EU and Russia are at loggerheads in all other ethno-territorial conflicts – leading to a more collaborative approach.

Secondly, in Brussels, the leaders of Armenia and Azerbaijan reaffirmed their will to normalize relations and build upon the agreements adopted since the war of last year. They confirmed that the sides would soon launch the border delimitation and demarcation process which is largely seen as a critical milestone towards a comprehensive peace treaty between the sides. The EU promised to provide an expert mission/consultative group to support the border delimitation and demarcation issues by providing technical assistance to both countries.

The progress in this process has been manifested early this week also by the statements of the Turkish and Armenian foreign ministries about the appointment of special envoys for normalization of the relations between the two countries. It is worth recalling that Turkey had preconditioned the establishment of these relations with Armenia’s recognition of Azerbaijan’s territorial integrity and its consent to the re-opening of regional transportation corridors.

Armenia and Azerbaijan had de-facto recognized their international borders and agreed to launch the process of their delimitation and demarcation at the Sochi meeting on November 26. The next condition raised by Turkey which was about the transportation corridors has been apparently provided as well. Azerbaijan’s President Ilham Aliyev, at a press conference at the NATO Headquarter prior to the trilateral meeting with EU and Armenian leaders, declared that Baku and Yerevan have already reached agreements on the re-opening of railways and highways.

However, this is seemingly one of the few areas at the moment where Baku and Yerevan have yet to get to a mutual understanding. The statements made by the Armenian and Azerbaijani leaders before and after their meeting revealed controversaries concerning the regional connectivity projects. Although the sides agree on the re-opening of railways and highways in the region including between the mainland Azerbaijan and its Nakhchivan exclave through the southern Armenia, which Azerbaijan calls the Zangazur corridor, they disagree whether there should be customs and border control at the border crossings.

It looks like this disagreement is only related with highways; according to the statements of Prime Minister Pashinyan and President Michel, the sides have an agreement on relaunch of the railways based on internationally accepted border and customs regulations on reciprocal principle, under the sovereignty and authority of the respective countries.

Baku insists that similar border and customs regulations could be applied to the highway along the Zangazur corridor only if they were applied also to the Lachin corridor which connects Armenia with Azerbaijan’s Karabakh region under the temporary control of Russian peacekeeping mission. The failure of the sides to reach an agreement on this issue was likely the reason why the Armenia-Azerbaijan-Russia working group led by their deputy prime ministers could not, in the first of December, announce the respective results of the Sochi meeting as expected by Russia’s President Vladimir Putin at the post-meeting press conference on November 26. It seems it will take some more time and likely more compromises for Baku and Yerevan to conclude a final agreement on highways.

All in all, the Brussels meeting of the Armenian and Azerbaijani leaders was an important development, because, apart from the above-discussed reasons, this was also the first time since the 44 Day War they talked directly to each other without the mediation of the third party – an opportunity created by President Michel during their trilateral meeting.  The outcomes of this meeting and, in general, the results of the past year give ground to hope that the next year will bring more peace and cooperation to the Armenia – Azerbaijan relations.