A book, titled “Mysterious Tales of Tabriz”, has been an epicentre of a political polemic as it took mass and social media by storm after a publication by Israel’s Azerbaijani ambassador with it on July 20. 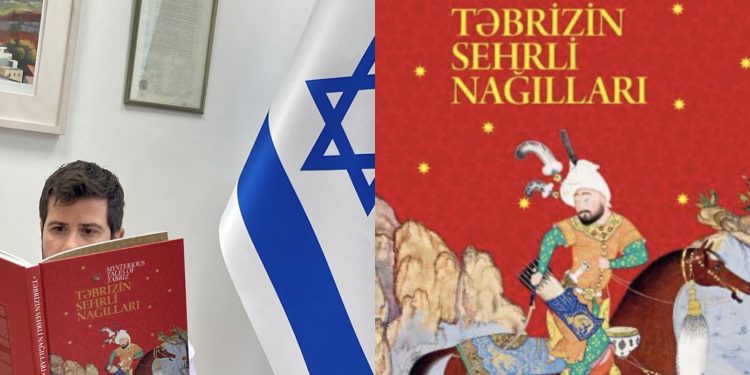 Ambassador George Deek tweeted a photo with his look locked on the book and claimed to learn “much about Azerbaijani history and culture in Tabriz”, referring to the Azerbaijani roots of the Iranian city.

The tweet prompted a quick and anger-packed reply from Iran’s ambassador to Azerbaijan, Sayed Abbas Mousavi, who accused his Israeli counterpart of “crossing the red line”.

The quarrel between two envoys kick-started a massive campaign across news and social media platforms dividing the users into two confronting camps. The book’s name has shortly climbed to Twitter trends on a #MysteriuosTalesofTabriz hashtag. Social media users, particularly from Tabriz, have been actively engaged in promoting the hashtag to top trends through emotional remarks and photos of the book. One of the users even thanked Ambassador Deek for “inspiring the world to read about Tabriz.” 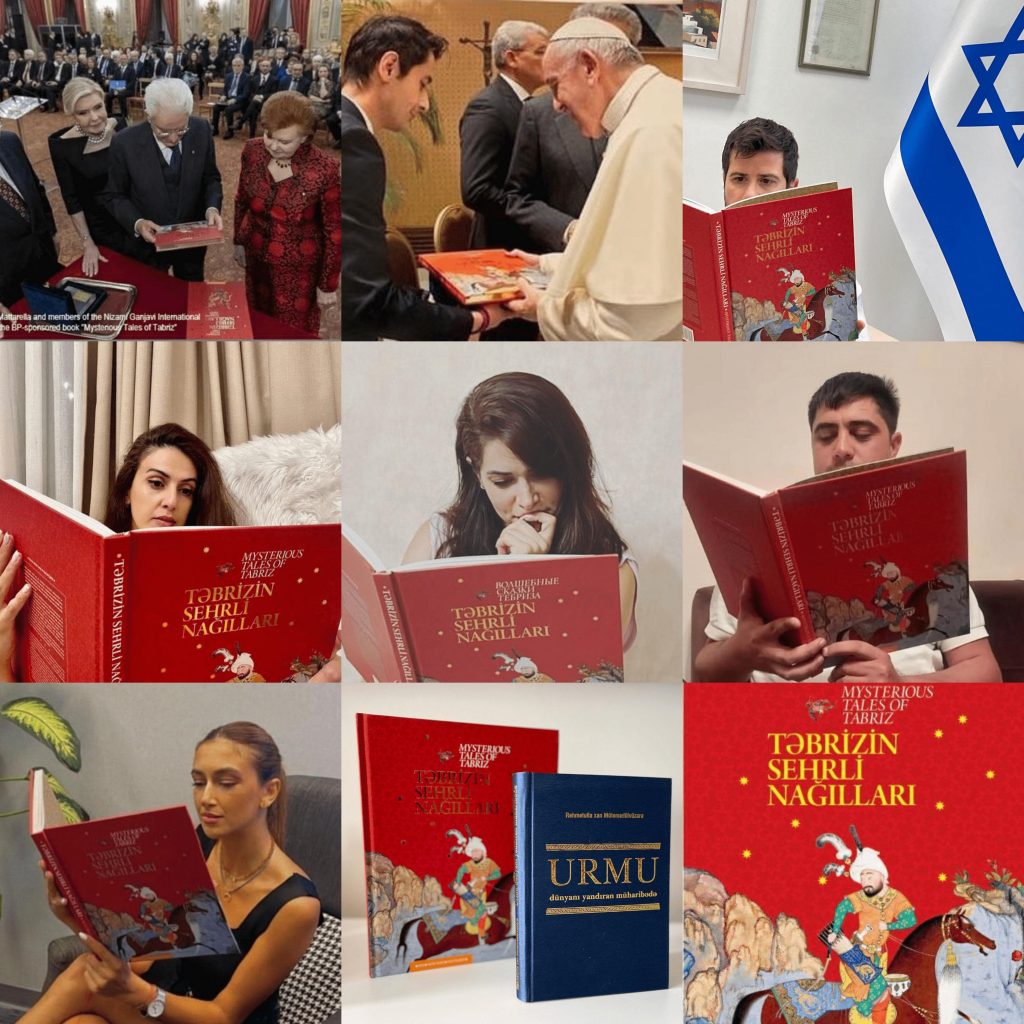 Joshua Zarka, the Israeli Foreign Ministry’s deputy director-general, also jumped into the quarrel with a response to Mousavi on Twitter, saying “Iran threatens to kidnap Swedish citizens because of a terrorist put in jail, Iran’s Ambassador to Azerbaijan threatens ours for reading a book.”

Zarka has further blamed Tehran for “bringing its country and people, including in Tabriz, to its worst level ever” and “triggering conflicts with everyone”.

Meanwhile, the author of “Mysterious Tales of Tabriz”, Azerbaijani researcher-writer Jamila Hasanzade, said she would have never dreamt of her book triggering a political scandal between Israel and Iran.

“I’m not interested in modern politics. I’m writing only about Tabriz, about the 14th-15th centuries, the most prosperous period of Tabriz. This is a scientific book rather than a collection of fairy tales,” she said in an interview with Baku TV, adding the name of the book was deliberately chosen to attract readers.

“I have many facts. Tabriz is [centre] of pure Turkic art, Azerbaijani art,” she concluded her remarks.

The book and Tabriz

“Mysterious Tales of Tabriz” presents the facts and cites the opinions of leading Western and Eastern scholars who researched the classical period of Azerbaijani miniature painting from its birth in the 13th century to the climax of its development during the Safavid Empire’s reign in the 16th century in Tabriz. The main focus of the book, which was released in 2014 with the support of the Azerbaijan Culture Ministry, BP, and Baku-based “Pasha Holding” Group of Companies, is to promote the ancient miniature painting art of Azerbaijan through unique illustrations accompanied by relevant information mostly related to Tabriz and its miniature art masters.

Tabriz, the protagonist city of the trending book, is a city in northeastern Iran, near its border with Azerbaijan, and is the capital of Iran’s East Azerbaijan Province. The majority of the city’s population of 1.6 million are of Azerbaijani origin and the Azerbaijani language is the most widely spoken among them.

The third-largest city in Iran has served as the capital of several Azerbaijani states and empires in medieval times. As the capital of the Safavid Empire in the 16th century, it was said to be the fifth most populated city in the world.

Some analysts are convinced that the reason behind Iran’s extreme sensitiveness about Tabriz should be sought in the period of the city’s bond with Azerbaijan. Iran’s authorities are said to always be sceptical about regional and global powers’ intention to use the predominant Azerbaijani population and partial Azerbaijani history of Tabriz as a pretext to fuel a massive campaign aimed at separating the city from Iran’s territory.

The recent scandal around the “Mysterious Tales of Tabriz” is believed to reflect Iran’s aforementioned anxiety as Tehran sees Tel-Aviv as its major enemy, as well as a big threat and obstacle to its regional influence.

The recent escalation in relations Israel-Iran relations over the “Mysterious Tales of Tabriz” is just a tiny episode of years-long conflict between the two states. Once friendly nations during the Pahlavi dynasty in Iran from 1953 to 1979, their relations soured and later settled at enmity following the Islamic Revolution in Iran in 1979. Following the Iranian Revolution and the fall of the Pahlavi dynasty in 1979, Iran adopted a sharp anti-Israel stance. Iran cut off all official relations with Israel and ceased to accept Israeli passports, and the holders of Iranian passports were banned from travelling to the territory of Israel, which was labelled as “the occupied Palestine” by the Iranian authorities. Tehran’s supreme leader Ayatollah Khomeini declared Israel an “enemy of Islam” and the “Little Satan”.

The full-swing deterioration of Iran-Israel relations entered its ongoing period of open hostility following the Gulf War in 1991.

Enmity with Israel has been a ground for Iran’s authorities to take a cautious stance toward the countries that established good relations with Tel-Aviv, including Azerbaijan.

Tehran has been periodically bringing friendly Israel-Azerbaijan relations on agenda, warning the latter to limit its ties with the Jewish state. Authorities of Tehran have even blamed Baku for “bringing Israel to the borders of Iran” in the Azerbaijani territory, which shares a 765-kilometre borderline with the Islamic Republic, after the Armenia-Azerbaijan war in 2020. The reason behind Iran’s accusations was steady multifaceted cooperation between Baku and Tel-Aviv, including in the energy and defence sectors. Azerbaijan supplies nearly 40 per cent of Israel’s oil imports and Israel, for its part, is one of the major arms suppliers to Azerbaijan. Israeli-made weapons have been actively used on the battlefields in the bloody war with Armenia two years ago, as a result of which Azerbaijan restored its sovereignty in the once occupied lands.

The post-war restoration and reconstruction campaign in these lands involved also an Israeli company, which is expected to build a cheese factory in Zangilan, an Azerbaijani district bordering Iran. Tehran also blamed Baku for its alleged intentions of deploying missile defence systems to be purchased from Israel along the frontier.

The accusations of Iran have been adamantly rejected by the Azerbaijani authorities, who demanded proof of Israel’s existence on the Azerbaijan-Iran border. After weeks of heightened tensions, the foreign ministers of the two countries agreed to ease the escalation through negotiations based on respect for the sovereignty and territorial integrity of the countries. Baku pledged to prevent any step that may use Azerbaijan’s territory for attacks against Iran. For its part, Iran voiced interest in participating in the restoration of the liberated lands of Azerbaijan.

The Azerbaijan-Iran-Israel triangle emerged around the “Mysterious Tales of Tabriz” book once again testified to the well-thought and balanced foreign policy conducted by the Azerbaijani authorities. Baku demonstrated an exemplary patience and approach toward the scandal between Tehran and Tel-Aviv, showing both sides their respective value for Azerbaijan – Iran, as a centuries-old neighbour and partner in numerous issues from politics to economy, energy, and culture, and Israel – a time-tested friend and partner that proved its worth on issues critical to Azerbaijan on the international arena.