Following the Protocols signed in 2009 to normalise relations between Turkey and Armenia, Turkey took the initiative as of 2010 to implement a holistic cooperative project, which aimed at supporting regional ties in the South Caucasus through economic-commercial means reacting effects on a regional as well as global scale. 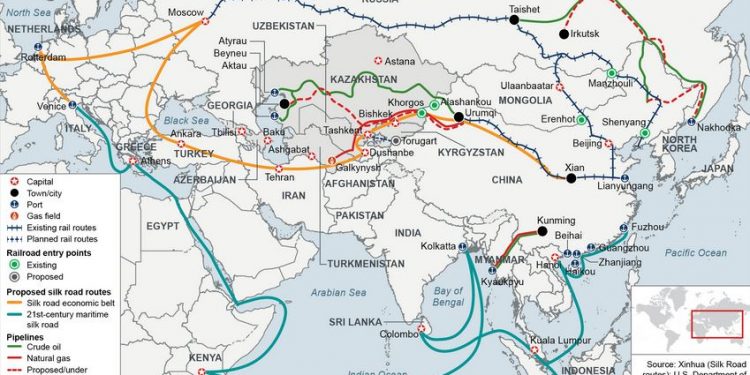 Map showing possible trade routes in China’s Belt and Road Initiative. The relief of Azerbaijan, which put an end to the Karabakh occupation, and the rapprochement of Turkey-Armenia, if evaluated well by Ankara, may allow regional changes in favor of Turkey. (Source: Xinhua)

This holistic project was designed to tie together not only Turkey-Azerbaijan-Georgia, but a much larger geographical area with transportation-communication networks. In keeping with this goal, it created an integrated network model reinforced with logistics centers bringing together railways/highways/air and seaports/oil-natural-gas lines with a view to reviving the modern silk road. With the contributions of the private sector and think tanks, this holistic network model was heavily promoted in various countries and regional organizations during the 2010-2014 period. At that time when Turkey took the lead and took initiatives in this area, neither China’s Belt-Road project nor the strategies put forward by the USA or the EU this year were in existence.

Before China put forward the Belt-Road project directly impacting the global landscape with a financial scope of 40 trillion dollars, the main theme of the Third Summit of Heads of States, which was held in Gabala / Azerbaijan on August 16, 2013, of the Cooperation Council of Turkic Speaking Countries, as it was then called, was determined as ‘Transportation Communication Networks/Infrastructure-Connectivity,’ with Turkey’s initiative. Turkey took steps to implement the Turkey and South Caucasus legs of transportation projects to kickstart the envisaged regional network. Marmaray, the Eurasia Tunnel, the third suspension bridge over the Bosphorus were completed, and in 2017 the Baku-Tbilisi-Kars railway project was concluded. Efforts were made for the Kars-Nakhchivan connection; however, no tangible progress was achieved to finalise this project. China, which launched the 17+1 model in 2012 to open the Central and Eastern European countries and the Balkans to Chinese investments in infrastructure projects, keeping its silence until 2013 on the ‘New Silk Road Project’ that covers a much wider geography, took the centerstage almost right after the Gabala Summit. While in Kazakhstan, Chinese President Xi Jinping placed on the global agenda the Belt-Road project of worldwide implications.

Although preliminary signals were in place at that time, the strategic rivalry between the USA and China was not at its current level. West-Russia relations were not yet hostage to the tension that exists today. A process that started with Russia’s invasion and annexation of Crimea in March 2014 and continued with the bloody terror acts of ISIS in Syria-Iraq not only resulted in the deepening of the conflict between the West and Russia, but also developed tensions between China and the USA, which started to see China as its main rival. The geopolitical/geostrategic conflict that broke out between these three poles appeared in different forms in various regions. Global competition has also spread to connectivity in transportation-communication-logistics-digitalization. The field of connectivity, which now has a large-scale and economic-commercial aspect as well as a political one, has become the subject of a new bone of contention.

Karabakh knot is being unentangled

At a time when the widespread strategic conflict was ongoing, the “frozen conflict” in the South Caucasus turned into a hot one between Azerbaijan and Armenia in September 2020. At the end of the forty-four-day war, with the support of Turkey, Azerbaijan liberated the lands occupied by Armenia since the 1990s and took Shusha under its control. Even though there are still obstacles to be overcome, the door of a new era that can bring peace, tranquillity, stability and prosperity has thus been opened in the South Caucasus. These developments brought up new opportunities for Turkey and the Turkic world, regional and beyond.

Right after the mobilisation started in the South Caucasus in the Autumn of 2020, there was another development of a serious concern for the global agenda, which attracted insufficient attention in Turkey. After seven years of negotiations, the EU signed the Comprehensive Investment Agreement with China. On the other hand, due to the intensifying strategic competition in 2021 and China’s actions targeting some political officials of the EU member states, that bilateral Agreement was suspended in May 2021 as a result of it being not ratified by the European Parliament. The year 2021 has become a stage for efforts and initiatives driven by new and contentious issues in relations between the West and China.

What happened in a year?

It is possible to summarize the cornerstones of the developments in the South Caucasus during the period as of the autumn of 2020 to the present:

Turkey and the Turkic world again in the middle corridor

How Turkey will identify and see to her national and regional interests in the briader picture outlined above has gained even more importance under present circumstances. It is essential that this process, which may have profound effects on Turkey’s relations with the Caucasus and the Turkic world beyond in a period of ongoing turmoil and instability surrounding her, be managed in a rational, effective and result-oriented manner. In this context, it is possible to summarize some of the main points that come to mind in the first place, as follows: