Iran and Azerbaijan were quick to escalate when a heated war of words broke out between the two countries on the first anniversary of the 2020 Nagorno-Karabakh war. 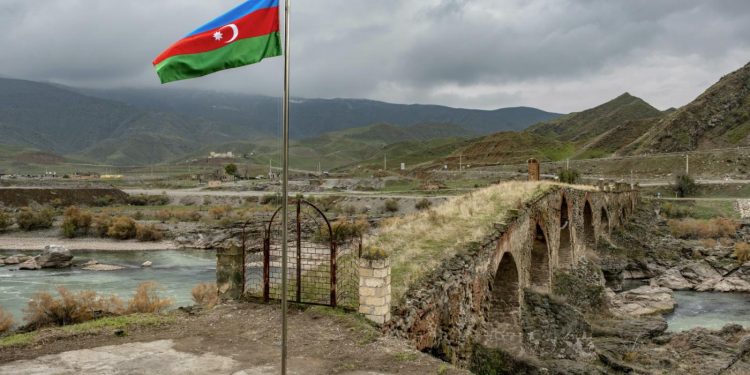 Tehran accused Baku of offering its territory to Israel to spy on Iran, as well as deploying Syrian mercenaries in the 44-day war against Armenia. While Baku accused Tehran of “briefly invading” parts of southern Azerbaijan during the war and allying with Armenia for organised drug trafficking to Europe.

As the rhetorical war continued between these two countries that together share the highest percentage population of Shia people globally, their military show of power was also in full swing at the Iran-Azerbaijan border and the Caucasus.

In mid-September, Azerbaijan launched a joint drill with Turkey and Pakistan. Two weeks later, the Iranian official army’s ground forces deployed a large number of troops at the border with Azerbaijan and held a war game. Azerbaijan took its turn a few days later and participated in another joint drill with Iran’s regional rival Turkey, this time in Georgia.

However, when the dust of the war games settled, a different image of the two neighbouring countries’ relationships emerged in the media.

On 28 November, the Azeri and Iranian presidents met in the capital of Turkmenistan, Ashgabat, and spoke of friendship and brotherhood, shaking hands and taking photos before the cameras.

Something had changed between the two countries.

Iran, which was previously closer to Armenia, has more recently leaned towards Azerbaijan, no longer stressing its reservations about Israel-Azerbaijan ties.

The deal was widely hailed by Farsi media as an outstanding economic achievement, a successful move to restore relations with Azerbaijan, and a hard blow to the United States’ maximum pressure campaign on Iran, which started in 2018 after the then-president Donald trump violated the 2015 nuclear agreement.

“At this point, all we can say about the gas swap deal is that it’s a not-smartly-crafted performance by a new government that needs to prove itself,” an energy expert at the Tehran Stock Market told Middle East Eye, on condition of anonymity.

The only official detail about the swap contract was disclosed by Iran’s oil minister, Javad Oji. He said that Iran would receive between 1.5 and two billion cubic metres of gas from Turkmenistan at the Sarakhs border crossing and deliver the same amount to the Nakhchivan Autonomous Republic of Azerbaijan at Iran’s Astara border.

“And what is the quality of the gas we receive from Turkmenistan, compared to what we deliver to Azerbaijan?

“More importantly, what is the percentage of Iran’s take from this amount of gas for delivering it to Azerbaijan?”

So far, Iran’s official media have provided conflicting numbers for the percentage of the share that Iran would take from the transferred gas.

The state-run Young Journalist Club wrote that between 20 and 25 percent of the delivered gas would be allocated to Iran. Conversely, the ISNA news agency put the number as low as five percent.

“I won’t be surprised if the actual number is even less than five percent. Firstly, because it was Iran that approached Turkmenistan for the deal, and secondly, due to the sanctions, we can only deal in the global market with prices much lower than actual prices,” the expert stressed.

Iran has previously applied the same tactic by offering significant discounts to its oil customers to go around the US sanctions.

“I think this contract only has political importance for the establishment. This is the price that Iran must pay to keep Azerbaijan happy,” the expert concluded.

However, other sources that MEE spoke to believed that influencing neighbouring countries was not Tehran’s only goal for signing the gas swap contract with Azerbaijan and Turkmenistan.

The contract was signed only a few days before the resumption of negotiations in Vienna for a potential revival of the 2015 nuclear agreement following a five-month pause.

Since Raisi’s victory in the presidential elections, it was the first time that Iran’s new hardliner delegation was sitting at the negotiations table with the signatories of the nuclear deal, which was originally signed under former reformist president Hassan Rouhani.

“The hardliners, who now lead the nuclear talks, did not want to arrive empty-handed at the negotiating table,” an Iranian diplomat, who worked at Iran’s foreign ministry between 2005 and 2013, told MEE.

The diplomat, speaking on condition of anonymity because he was not authorized to speak to the media, said that while the new negotiating team drafted the two proposals Iran presented in November during the talks, other offices at the foreign ministry attempted to improve Tehran’s political relations with neighbouring countries and regional powers.

“I’m not saying that’s been a successful strategy. But that’s how Iran’s new foreign policy will work for, at least, the next four years,” he added.

The diplomat explained that Iran had lost the opportunity to maintain its influence in the Caucasus during Rouhani’s administration, as Tehran was focused on negotiating with the US and improving ties with European powers.

“Through the channels we had with the foreign ministry, we warned [former foreign minister Mohammad Javad] Zarif and Rouhani over Iran’s political passivity in the Caucasus, but they were overwhelmed by the talks with the West,” he said.

“And, as a result, instead of having a well-founded foreign policy in the South Caucasus, we now run with the hare and hunt with the hounds.”

Nevertheless, the diplomat stressed that since the early 1990s, the only matter that has remained intact in Iran’s diplomacy in the Caucasus is its strong objection to the opening of the Zangezur transport corridor that connects Azerbaijan to its exclave Nakhchivan.

The opening of the 21 kilometre corridor, which Azerbaijan’s President Ilham Aliyev has persistently demanded following the 2020 war, would effectively cut off Iran’s access to the Caucasus through Armenia.

Despite solid opposition by Iran and Armenia to the Zangezur passageway, experts believe that if Turkey and Russia decide to permit Azerbaijan to use the corridor, neither Iran nor Armenia has the power to go against it.

A retired Iranian diplomat, who served in Iran’s foreign ministry during the first Nagorno-Karabakh war (1988-94), told MEE that Tehran is aware of its limited influence over the Azerbaijan-Armenian conflict.

“Azerbaijan counts on Turkey and Israel military and political support,” the diplomat, who wished to remain anonymous, said.

“On the other side, Armenia follows what Russia decides upon, so there is not much space left for Iran to play a role. If tomorrow Russia orders Armenia to withdraw its troops from the Zangezur corridor and hand it over to the Russian peacekeepers, Armenia will do that. As they did in Karabakh to end last year’s war.”

According to the veteran diplomat, even during the first Nagorno-Karabakh war, Iran was not the most influential country in the region, and its efforts to broker a peace deal between Azerbaijan and Armenia were unsuccessful. However, back then Tehran could at least host the fighting neighbours for peace talks.

“Iran’s power in the Caucasus has declined gradually, since our politicians and the commanders of the Iran Revolutionary Guard Corps were busy exerting influence in Iraq, Lebanon, Syria, and Yemen,” he said.

“Nowadays, we can’t fool Azerbaijan by offering them a gas swap deal. Indeed, they are using our weaknesses for their benefit, and the gas deal was clear evidence for that.”

By MEE correspondent in Tehran