Belgrade will encourage dialogue between East and West, says president of Serbia which hosts anniversary events. 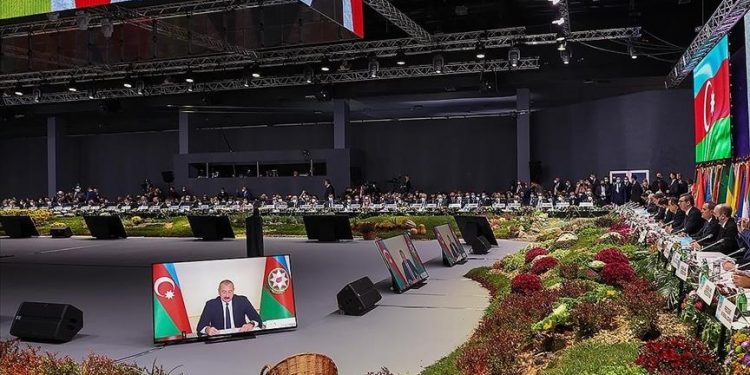 The Non-Aligned Movement (NAM) is contributing to world peace, justice and solidarity, the Azerbaijani president said on Monday, as the group marks 60th anniversary.

The Non-Aligned Movement gathered in Serbia’s capital Belgrade for a high-level commemorative meeting.

“The NAM has played an important role in the international arena with its dedicated efforts for the sake of global peace, justice, and solidarity,” Ilham Aliyev, the term president of bloc, said in his opening speech via video conference.

Azerbaijan will continue to work to increase solidarity within the movement, the president pledged.

Aleksandar Vucic, the president of Serbia which hosts the event, said that peace is the most important thing to continue cooperation.

“I am convinced that Belgrade, as a symbol of crossroads and a meeting point of East and West, will encourage dialogue between the parties. I am very happy to host such a summit today,” said Vucic.

Serbia is proud to be militarily neutral country, he added.

“We are proud that as a militarily neutral country we are striving towards the EU, and at the same time, we are strengthening the development of friendship for African and Asian countries. That is our treasure and our strength,” said Vucic.

Also speaking at the event was UN Secretary-General Antonio Guterres, who said the Non-Aligned Movement has a critical role to play in the world.

“For everyone’s sake, we must urgently bring all countries to a high-level vaccination coverage. In particular, G20 countries must mobilize sources and turn the world health organization’s global vaccination strategy into reality,” he said.

Guterres emphasized that countries should be supported for the elimination of climate change and nuclear weapons.

He expressed hope for more active and stronger international cooperation.

Earlier, Turkish Foreign Minister Mevlut Cavusoglu arrived to participate in the event as a guest of honor.

The Non-Aligned Movement was formed in 1961 under the leadership of then Yugoslavia when the world began to polarize between East and West.

Although the group lost its influence over time, the countries involved in the movement continued to organize conferences and summits where current issues were discussed. It currently has 120 members.

The most recent summit was hosted by Azerbaijan in 2019 in the capital Baku. This year, it gathered leaders from over 100 countries in Belgrade.