With the victory of Azerbaijan against Armenia in the Nagorno-Karabakh region almost completing its first year, the South Caucasus region does not yet seem ready to enter a phase of long-term stability. 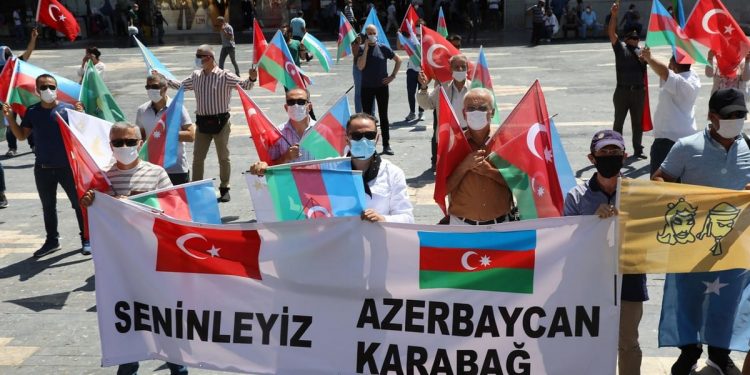 Activists hold flags of Turkey and Azerbaijan as they gather in Ankara, on 8 August 2020 [ADEM ALTAN/AFP/Getty Images]

The peace agreement, sponsored by Turkey and Russia, succeeded in ending the war between the two countries and opened, for the first time, prospects for the possibility of reaching a comprehensive peace agreement between Baku and Yerevan, but it only addresses the local factors of this conflict, ignoring the external factors affecting it.

Three regional countries are involved in the issue: Russia, Iran, and Turkey, and while Moscow and Ankara managed to end last year’s war and have peacekeeping forces in Karabakh, Tehran found itself side-lined in a new geopolitical equation, and its feelings of vulnerability were increased recently by growing Azeri-Israeli relations. During the war, it was reluctant to express public support for Armenia, lest it anger the more than thirty million citizens of Turkish origin living in northern Iran. With President Ebrahim Raisi assuming power, it is trying to resist the new geopolitical equation on the basis of taking action to confront what it considers to be an Israeli presence on its borders.

Although the concern about the Israeli factor seems justified in view of Baku’s military relationship with Tel Aviv, it is not new, as Tehran has believed for years that Israel is using this relationship to spy on it through tools, such as surveillance drones, as well as the increase in Israeli intelligence activity in this state. However, invoking this concern at the present time shows an Iranian desire to thwart a transformation that Tehran sees as a threat to its influence, not only in the South Caucasus but also in the countries of Central Asia.

After the defeat of Armenia, Azerbaijan regained areas along the 130 km of its border with Iran, which Armenia had occupied in the 1990s. It also recovered part of the main highway linking Iran to Armenia via Azerbaijan, an important trade route to the Black Sea and Russia. Azerbaijan’s decision to impose duties on trucks transporting goods to Armenia angered Tehran, and it responded by conducting military exercises on the border with Azerbaijan. This conflict quickly took on a regional aspect with Turkey announcing military manoeuvres with its ally, Azerbaijan, in the Nakhichevan region. It is no coincidence that the Iranian manoeuvres also follow military exercises conducted by Turkey, Pakistan and Azerbaijan in Baku on 12 September.

The marginalisation of Iran in the new Caucasian equation has awakened multifaceted Iranian concerns. On the one hand, it came at the expense of Turkey’s growing influence, which will enable the Nakhichevan-Azerbaijan corridor project agreed upon in the peace agreement to reconnect it geographically with the Turkic-speaking countries in Central Asia, after decades of disconnection. The Iranians fear that this corridor will hinder their trade with Armenia and weaken their influence in the Turkic-speaking countries of Central Asia. Therefore, Iran finds itself the biggest loser in this transformation, compared to the gains of Turkey and Russia. This is further intensified by the fact that its ally, Armenia, is seeking to limit its losses by discussing the possibility of ending the historical dispute with Azerbaijan, and it has already opened its airspace to Azerbaijan. Moreover, the messages that were recently sent by its Prime Minister, Pashinyan, expressed his desire to normalise relations with Turkey, were also positive.

Iran’s concerns are not limited to fear of isolation in the new situation, but also include the context of competition for energy supply lines in a region where pipelines shipping oil and natural gas to the West intersect. Since 1994, BP has invested more than $70 billion in energy and transportation development projects from Azerbaijan. The projects include a pipeline connecting the production of the Caspian Sea to the Turkish port of Ceyhan. Turkey’s strengthening of its political and economic relations with the Turkic-speaking countries will help it in the future to develop the Baku-Tbilisi-Ceyhan pipeline to include Turkmenistan’s oil and gas. This line would be a competitor to the proposed Iranian pipeline that runs south of Iran’s Pars field towards Europe through Iran, Iraq, Syria and Lebanon, to supply European customers, as well as Iraq, Syria and Lebanon.

In the wake of the Iranian manoeuvres, Iranian Foreign Minister, Hossein Amir Abdollahian, headed to Moscow, seeking to lure Russia to Tehran’s side in the face of the new geopolitical equation, especially since Russia does not seem completely comfortable with the Turkish role that competes with it in a region it considers its backyard. Abdollahian clearly said that his country will not tolerate geopolitical changes and map changes in the Caucasus. This, in addition to the escalation of tensions with Azerbaijan, reflects an Iranian attempt to create a new arena of conflict in the region, but what he heard from his Russian counterpart, Sergey Lavrov, was not very encouraging for the Iranians. The latter reiterated Russia’s priority to find a six-party platform that brings together, Russia, Turkey, Iran, Azerbaijan, Armenia and Georgia, for regional cooperation. Moscow was clear that it did not want to re-escalate the situation in the region.

Although Turkey publicly avoids supporting Azerbaijan in its dispute with Iran, given the sensitivity of Turkish-Iranian relations, Ankara will not leave Baku alone. However, at the same time, it wants to turn its gains in the Karabakh war into long-term and stable strategic influence. Turkish President Erdogan has previously proposed a formula for six-party cooperation among the countries of the region, to serve several goals including containing Iran’s anger, but the proposal seems difficult to achieve at the present time, and needs to address bilateral differences between these countries, before bringing them together at one table. There is a historical problem between Azerbaijan and Iran, as well as Azerbaijan and Armenia, and the same applies to Russia and Georgia. In light of these facts, it is unlikely that the tension between Baku and Tehran will subside in the foreseeable future. It is also unlikely that the regional rivalry between Tehran and Ankara in the Caucasus will die down, as is the case in many other arenas.