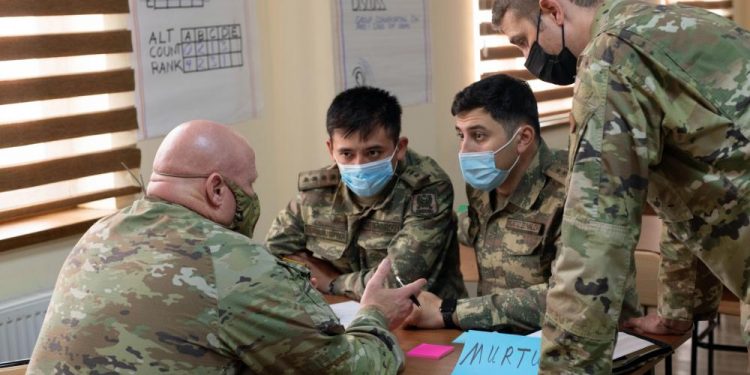 Two Oklahoma Army National Guardsmen and two Oklahoma Air National Guardsmen conducted a strategic planning and unit training management event in the first of a series of engagements planned between Oklahoma Joint Force Headquarters and the Peacekeeping Brigade. This visit enabled the OKNG to better understand the Peacekeeping Brigade military doctrine, which the Guard will use to tailor future engagements intended to help enhance the Azerbaijan military decision making process.

“The Oklahoma National Guard previously helped the Azerbaijan Armed Forces with their OCC (Operational Capabilities Concept) battalion,” said Lt. Col. Dale Moss, State Partnership Program director with the Oklahoma Army National Guard. “It’s a NATO-certified battalion that they are currently trying to grow into a Brigade with the 2nd Battalion, and we are here to help them achieve their NATO certification by focusing on staff development leading up to that evaluation.”

The strategic planning unit training management presentations by the OKNG highlighted the workflow and structure the U.S. Army uses to monitor training and readiness. This allows doctrinal review further down the line to be expanded upon during the series to build into the next engagement intended to cover military decision making processes, as well as establishes a sustainable relationship with Oklahoma’s international partner.

“This initial event is important for our partnership and has been a wonderful experience, but it has also set up the series by finding the key objectives for the Peacekeeping Brigade,” said Lt. Col. Ben Nicholls, senior plans officer for the Oklahoma Army National Guard. “Moving forward, it is critical for us to create a years-long training plan for these echelons of the Peacekeeping Brigade. We have to develop strong international partnerships and help successfully execute operations, exercises and training focused on achieving those objectives to really get to the core of meeting OKNG and partner nation commander training objectives, as well as combat command lines of effort.”

This intent meets a priority for Army Gen. Daniel Hokanson, chief of the National Guard Bureau and member of the Joint Chiefs of Staff. He stressed in a recent article how important the National Guard has been in sustaining and strengthening U.S. relationships with partners and allies for over 30 years under the SPP. He said that strong partnerships, in conjunction with a high state of readiness, helps the National Guard contribute to America’s resilience.

“Through the strengthening of these relationships and the interoperable capabilities acquired in long-term training, we can reach and maintain readiness levels in our state partnership that are able to overcome any mission at home and abroad,” Nicholls emphasized.

In addition to the strategic planning and unit training management conducted with members of the Peacekeeping Brigade, the Guardsmen were hosted by military commanders for a tea ceremony in recognition of the many years of partnership between Azerbaijan and Oklahoma. One commander noted he had previously met with Oklahoma Governor Kevin Stitt and the Adjutant General of Oklahoma (TAG) during an official visit in July of 2021. The capstone event of the visit, which included meetings with agricultural, economic and business entities, was the signing of a memorandum of understanding between Oklahoma State University and Azerbaijan State Agricultural University (which was initially established as an agreement during the 2019 Oklahoma-Azerbaijan Agriculture Forum) to develop academic programs as well as student and faculty exchanges. Exchanges between Azerbaijan and state universities have included Oklahoma State University for its agricultural program and the University of Oklahoma for its medical program.

“I enjoyed seeing the exchange program formalized this past July — just before I started at the embassy (in 2010) was when OSU engaged with the Azerbaijan agricultural program to start doing exchanges,” said Moss, referencing the three years he spent in Azerbaijan as bilateral affairs officer for the U.S. Embassy in Baku. “It was also the first time the Oklahoma Guard met with the Peacekeeping Brigade and when they confirmed their interest in the mil-to-mil events we could support to gain that NATO certification.”

The trip to Azerbaijan in 2021 was a whole-of-government approach, meaning representatives from multiple areas of Oklahoma’s industry and government engaged with their counterparts in agriculture, economy, business and education, while this visit was a direct mil-to-mil engagement. Both visits have been important in supporting SPP objectives.

“The inroads we develop during visits like this go far beyond the classroom environment – they are of great strategic value to the mission of the U.S. Embassy in Azerbaijan, and they support U.S. European Command’s lines of effort,” said Maj. Randy Dunning, bilateral affairs officer stationed at the U.S. Embassy in Baku. “This has never meant as much as it does today with what we are seeing in Eastern Europe. We must be ready to support countries formerly under control of the Soviet Union, like Azerbaijan, as they turn to the West for military and civilian partnerships and development.”

The partnership between Oklahoma and Azerbaijan will soon enter its 20th year, making this trip an important milestone in Oklahoma’s continuous involvement with the State Partnership Program. In addition, this is notably the first joint SPP event since COVID-19. The training was a combined Army and Air endeavor, opening a greater understanding of capabilities and assistance that can grow between the branches of the OKNG as well as how joint knowledge can help achieve SPP objectives moving forward.

“This visit really honed in on the Guard side of the partnership program and how we can help meet objectives at multiple levels,” said Moss. “The SPP overall is tactical level engagements that support strategic objectives. The third pillar of the National Defense Strategy is supporting our allies and partners, and this really directly gets after that strategic initiative.”