The talks in Sochi are over, and a new trilateral statement has been signed. Of course, its detailed analysis is yet to come. 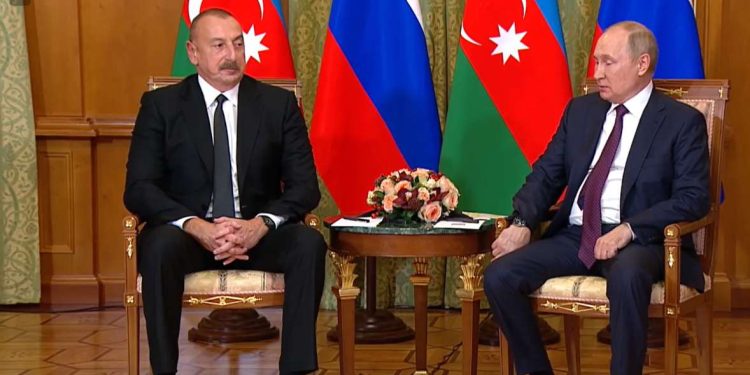 But it is already immediately clear that Moscow has managed to seize the mediation initiative. One can speculate to what extent we can “thank” French President Macron’s scandalous statements for this, but Moscow once again takes over the mediation after the Prague meeting.

First of all, the document states in black and white: the participants of the talks “agree to refrain from the use or threat of force, to discuss and resolve all issues exclusively on the basis of mutual recognition of sovereignty, territorial integrity and inviolability of borders in accordance with the UN Charter and the Alma-Ata Declaration of 1991”. This fully reflects Azerbaijan’s position and demands and fully correlates with the five principles of the future peace treaty, which Azerbaijan presented to both Armenia and the international community. The principle of territorial integrity, sovereignty and inviolability of borders is exactly what Baku has insisted and continues to insist upon.

No less important is what was not included in the “statement”. Especially since Vladimir Putin, speaking to journalists after the talks, confirmed that not everything had been settled, and some things had to be removed from the final text of the statement. The Russian president did not specify what it was exactly.

According to informed sources, Nikol Pashinyan tried to cram into the final statement a paragraph claiming that in May 2021 Azerbaijan “invaded” the “sovereign territory of Armenia” and demanding the restoration of the status quo. It did not work. Likewise, Pashinyan wanted the events of September 12-13 to be mentioned in the final statement—in their Armenian “version”, accusing Azerbaijan of an imaginary “invasion” and demanding the withdrawal of troops. It did not work either. Seeing that the desired wording was missing from the statement and was unlikely to appear there, Pashinyan tried to organize “diplomatic blackmail” and refused to sign the final statement. But then Vladimir Putin stepped in.

Pashinyan had to sign a statement with “pro-Azerbaijani”, with and without quotation marks, wording in the end. And it is quite clear why. First of all, Moscow is well aware, especially after the visit of the CSTO monitoring mission, that there has been no “Azerbaijani invasion” of Armenian territory, and it is absurd to talk about it until the delimitation and demarcation of the border is carried out. Second, Russia is the one who has the old Soviet maps, where the borders of the republics are specified with maximum accuracy, and this is yet another evidence that there was no “Azerbaijani invasion”. In short, Armenia has been suffering both local military and diplomatic defeats even after the 44-day war.

And that, apparently, is not all. The wording “Nagorno-Karabakh” is never used in the entire text of the final document, not even as an area where the Russian peacekeeping forces are deployed. There is no mentioning of “Karabakh” even without the epithet “Nagorno” either.  Moreover, there are no references and wording in the final statement which would indicate the reanimation of the topic of the “status of Karabakh”.

This requires a clarification. Whether there was in fact a 15-paragraph Russian plan that included the reanimation of the issue of the “status of Karabakh” is more a matter of guesswork than even “leaks”.

Nevertheless, both the provocative phrasing in the Russian state-controlled media, with “news from ‘Nagorno-Karabagh Republic'”, and the map shown in the air of Channel 1, where a part of Azerbaijan’s territory, namely the area of temporary deployment of the Russian peacekeepers, was indicated as “NKR”, and the protest rally held the day before in Khankendi with demands for “independence” and appeals to Russia for help give too unambiguous information to ponder over. But the statement signed following the meeting focused on the normalization of relations between Azerbaijan and Armenia, but not on the Karabagh conflict. Which again completely matches the position that the President of our country Ilham Aliyev outlined during the bilateral meeting with his Russian counterpart Vladimir Putin: “The Karabakh conflict is already history. It was resolved two years ago. There is practically nothing to discuss in this context. And the normalization of Azerbaijani-Armenian relations is a format which requires, of course, very serious steps, and we count on your personal and Russia’s active role in achieving these goals.” The red lines drawn by the head of the state are fully reflected in the final document, and it is a great diplomatic victory.

Finally, there is another outcome of the meeting. Contrary to Pashinyan’s transparent hints, there is no reference in the final documents of the Sochi talks to an extension of the Russian peacekeepers’ stay in the territory of Azerbaijan. While before the meeting, the Armenian prime minister waxed poetic, promising that he was ready to sign a document on prolonging the stay of the peacekeepers for another 10, 15 and even 20 years. Finally, there is no doubt that for Pashinyan the “initiative” with the prolongation of the peacekeepers’ stay was an attempt to solve several problems with one diplomatic move: to create favorable conditions for Arayik Harutyunyan and Co, to support the illusion of a restart of “miatsum” and even to return from Sochi with a diplomatic success. And Yerevan’s plans obviously included pitting Baku and Moscow against each other. It seems that Pashinyan had no doubts that Moscow would push the decision on the peacekeepers.

But here, too, everything ended not with a bang but with a whimper. The Russian peacekeeping forces are deployed in the territory of Azerbaijan, and it is Baku, not Yerevan, who has the final say here. Not to mention the fact that, as Russian Deputy Foreign Minister Rudenko reminded on the eve of the meeting, the peacekeepers have a mandate for 5 years, and it has not expired yet. That is, Pashinyan was advised not to put the cart before the horse. More precisely, before the “peacekeeping” APC.

This means that the talks in Sochi ended in yet another, massive, diplomatic victory for Azerbaijan. Once again President Aliyev has elegantly sidestepped the “diplomatic traps”. Our country confidently pursues its foreign policy and effectively defends its position on practically all platforms, including “European”, “Russian”, and “American” mediation.

And it seems that Armenia is only now beginning to realize that after trying to steer the region toward a new confrontation, the country is now suffering a diplomatic disaster on no lesser scale than its defeat in the 44-day war.