The ongoing border dispute between Armenia and Azerbaijan has revealed a discrepancy in respect for international borders, argues Vasif Huseynov in this opinion piece for KarabakhSpace.eu. 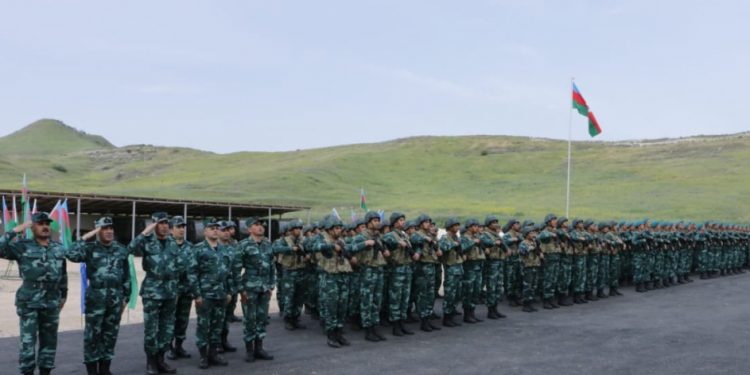 On May 12, the Armenian government was alarmed that the armed forces of Azerbaijan, violating the state borders of Armenia, advanced 3-4 kilometers into the Armenian border zone in the areas around Black Lake (In Armenian: Sev Lidj). The area is a disputed territory since the Armenian-Azerbaijani state border has been never demarcated due to the former occupation of the bordering Azerbaijani areas, and the Armenian public is not supportive of the restoration of the Soviet borders with their eastern neighbour.

The disagreement between the sides concerning the restoration of the former borderline derives from several contending issues. First, there are at least two Soviet maps which could be used in the demarcation process but they do not match and, as such, contain conflicting  markings. Second, the restoration of the former borderline would obligate Armenia to return six villages of Azerbaijan’s Gazakh region and one village of the Nakhchivan Autonomous Republic to Azerbaijan – which outrages some nationalist groups in Armenia who have not yet reconciled with the territorial losses in the latest war. Most importantly, Soviet Azerbaijan included also the Karabakh region, which Armenia needs to recognise as part of Azerbaijan if the former borders would be re-established.

The good news is that the sides chose to settle these issues non-militarily – at least for now. On May 20, the Armenian acting prime minister, Nikol Pashinyan, confirmed that his government is discussing a deal to establish an international border commission with Azerbaijan. The commission through the consultation/mediation of Russia would resolve the demarcation and delimitation of the Armenia-Azerbaijan state border.

The process has the full support of the Azerbaijani government. President Ilham Aliyev of Azerbaijan, on May 20, declared his country’s readiness to recognise Armenia’s territorial integrity and to sign a peace treaty with this country, adding that Armenia should likewise recognise Azerbaijan’s territorial integrity. He also condemned Armenia’s attempts to return the status of the Nagorno-Karabakh back to the negotiations table stressing that “it is not a question that can be discussed”.

The Armenian government does not, however, have consensus on the issue of demarcation and as such does not speak with one voice. A day after Pashinyan’s confirmation of the previously leaked trilateral (Armenia, Azerbaijan and Russia) document establishing the border commission, Armenia’s Ministry of Foreign Affairs stated that “The demarcation and then the delimitation processes between Armenia and Azerbaijan must be a part of the conflict’s comprehensive peaceful settlement process, in which the issues of de-occupation of the territories of the Republic of Artsakh [Armenian name for Karabakh] and determining the final legal status of Artsakh must be addressed first”.

This statement deals a severe blow to the peace negotiations between the two conflicting states as it reiterates the old Armenian claims to the internationally recognised territories of Azerbaijan in flagrant violation of the UN Security Council and General Assembly resolutions, as well as other international documents and principles. The Armenian side is fully aware that Azerbaijan will never put the fate of its internationally recognised territories on the table for a possible exchange. The linking of the larger peace process with this unlawful condition serves, therefore, only the purpose of derailing the negotiations and blocking the peaceful resolution of the bilateral disputes.

Azerbaijani society was outraged by the reaction of some states to the recent border dispute between Armenia and Azerbaijan since those particular states had never been that sensitive to the conflict when the victim was the Azerbaijani side.

For example, on May 14, just two days after Armenia announced an alleged incursion into its territories, French President Emmanuel Macron hastily wrote on his Facebook page in Armenian stating the need to withdraw Azerbaijani troops from the territory of Armenia.  “Azerbaijani troops entered the Armenian territory. They must return immediately,” he wrote, adding that France has supported and will continue to support the Armenian people. He even proposed a UN Security Council meeting for the settlement of the situation.

Unfortunately, neither France nor any other leading member of the Western community had ever demonstrated that urgency when Azerbaijan’s territorial integrity was violated for three decades, and 20 percent of its territories were kept under illegal occupation. This inconsistency happened despite the very fact that those states were fully cognisant of the situation as demonstrated by the statement of German Chancellor Angela Merkel in her introductory remarks to the meeting of the Parliamentary Assembly of Council of Europe, where she cited the conflicts over Nagorno-Karabakh and Crimea as part of the same category where the national sovereignty of the states are violated. One would have expected Germany to demonstrate the same support to Azerbaijan in its struggle to restore the country’s territorial integrity as they are doing vis-à-vis Ukraine. This would have been more expected from France as this country is one of the Co-Chairing states of the OSCE’s Minsk Group, legally obliged to show neutrality and co-ordinate peace negotiations between Baku and Yerevan.

That said, the continuous claims of Armenia against the internationally recognised territories of Azerbaijan and the dangerous inconsistency in the policies of some leading members of the international community jeopardise peace and security in the South Caucasus and plant mines for future armed escalations. The peace can be, however, reached straightforwardly if Armenia agrees to abide by international law and recognise Azerbaijan’s territorial integrity, as Azerbaijan says, it is ready to recognise Armenia’s.