Opportunities for Ankara and Baku in new geopolitics

President Recep Tayyip Erdoğan visited Azerbaijan on Thursday with a delegation that included yours truly. 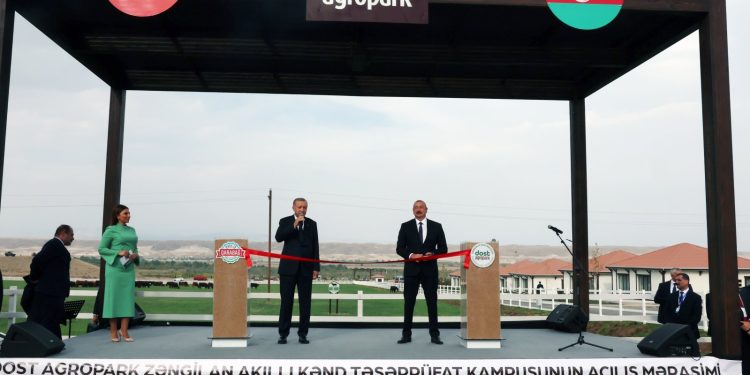 To be honest, the Turkish president’s visit to the country was met with such excitement that one couldn’t help but feel like they were actually visiting any province in Türkiye.

The opening ceremonies, which featured the recitation of the Surah Al-Fath, also reminded participants of Karabakh’s return to Azerbaijan and the Azerbaijani victory. The region, which was liberated from Armenian occupation and, subsequently, land mines, currently witnesses a rapid development drive. As part of Azerbaijan’s “Great Return” project, the government has been building infrastructure including highways, railways, airports and smart cities.

Türkiye, which made a critical contribution to Karabakh’s liberation, also plays an important role in the region’s reconstruction. As such, Erdoğan’s visit covered the opening ceremony of the Zangilan International Airport, the second airport to have been built in Karabakh, as well as the opening ceremony of the first part of Dost Agropark smart agricultural village and the groundbreaking ceremonies for the Kumlak Train Station and the Jabrayil Forestry Training Center.

The friendship between Erdoğan, who heavily relies on leader-to-leader diplomacy, and Azerbaijani President Ilham Aliyev, is on a completely different level. It is possible to reach that conclusion by looking at the frequency of their meetings as well as their behavior at opening ceremonies. Aliyev pledging to go to Shusha, a recently liberated city of great symbolic significance, “with my brother Erdoğan” attested to that emotional bond. Let us also recall that Erdoğan attended the opening ceremony of Fuzuli Airport in Karabakh and Aliyev reciprocated by attending the opening ceremony of the Rize-Artvin Airport. On Thursday, the two leaders experienced the joy of rebuilding Karabakh together.

Obviously, taking back Karabakh after three decades represented a victory that strengthened Aliyev’s leadership and consolidated Azerbaijan’s national identity. That victory also bolstered the Turkish-Azerbaijani friendship and fraternity, which gained a strong foundation through the Shusha Declaration. The cooperation between the two states in many areas, from energy to defense, gradually evolves into multidimensional integration. Moreover, the new geopolitical situation, which emerged out of the Russian invasion of Ukraine, encourages Türkiye and Azerbaijan to take bolder steps together.

Russian President Vladimir Putin recently suggesting that Türkiye could become a “natural gas hub” drew renewed attention to the question of Europe’s energy supply. The initial reaction signals that Europe cannot continue to rely on Russian energy even if the war in Ukraine ends.

Meanwhile, the goal of Türkiye, which will start producing natural gas in the Black Sea next year, to become a production and distribution center for energy is not limited to Russian natural gas. In addition to Azerbaijan and Turkmenistan, the country could take the lead in transmitting natural gas from the Eastern Mediterranean basin. Again, the European commitment to ending their dependence on Russian energy transforms the Caucasus and Central Asia into focal points of key geopolitical calculations. That means that the “Middle Corridor” stands to gain further importance. As such, Türkiye and Azerbaijan emerge as key players in logistics and energy. Karabakh’s reconstruction and the opening of the Zangezur corridor will serve that agenda.

The shifting geopolitical balance also fuels the revival of the Organization of Turkic States (OTS). Next month, that organization will hold a summit in Uzbekistan that could represent a key event for translating the various agreements between the member states into concrete collaborations. In this regard, Türkiye’s integration into the Turkic world, which the late Turgut Özal had envisioned in the early 1990s, begins to take place today under Erdoğan’s leadership.

Amid a great power competition, what lies ahead for the Organization of Turkic States is closely related to Russia’s future. Pursuing a balanced policy against the backdrop of fierce competition between the West and Russia would create fresh opportunities for Türkiye and Azerbaijan alike. In this chapter of world history, which could lead to major changes, Erdoğan’s friendship with Aliyev and leader-to-leader diplomacy with Putin could lead to opportunities.