Ordinary French racism. Paris and Yerevan deserve each other

The adoption of the resolution against Azerbaijan in the French Senate resembled a play in the puppet theatre. French senators, who were pulled behind the strings like puppets by those who ordered the show, hastily voted for something they do not know and had no clue about. 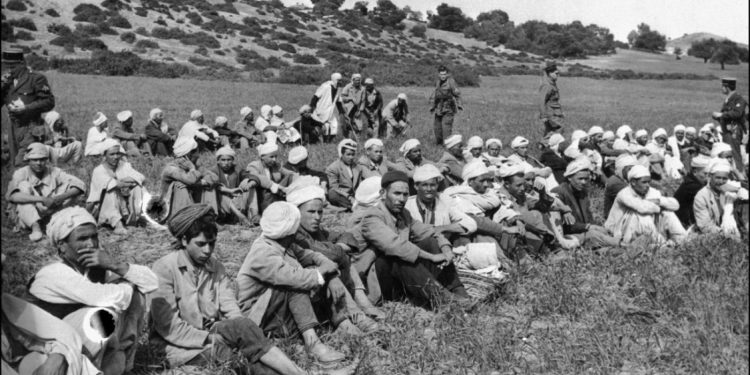 Algerians arrested during a French military operation on 21 April 1956, during the war of independence, in Algeria's Tablat and Bir Rabalou region (AFP)

Senator Bruno Retailleau, who distinguished himself, particularly in this process, delivered a bravura speech full of falsehoods and bogus stories. However, what objectivity and justice can be expected from the parliament of the country which is stained with the blood of genocides and has supported the thirty-year occupation of Azerbaijani lands by Armenia?

“You cannot leave Armenia alone with its misfortune,” said Retailleau, one of the initiators of the resolution. After such a threatening and pitiful appeal, we would like to clarify why the French senator and his applauding colleagues are so passionately in favor of Armenia’s happiness. For instance, is there any link between France, guilty of extermination of the population of its former colonies, and Armenians, who during the last centuries have also committed massacres against Turks and Azerbaijanis, as well as inhuman terrorist acts in different countries? Well, the next question that follows from this is whether Azerbaijan needs to react in any way to the decisions of the senate of a country with such a crime–rich past.

Atrocities committed by the French against various peoples under their rule are not much different from fascist Nazism, and sometimes they are even superior. For example, the bloody deeds of the French racist tyrants in African countries in the XIX-XX centuries – it was a whole chain of genocides against local peoples and nationalities. The total number of those brutally murdered by the French military in the African region runs into hundreds of thousands. There is still no responsibility, no punishment. 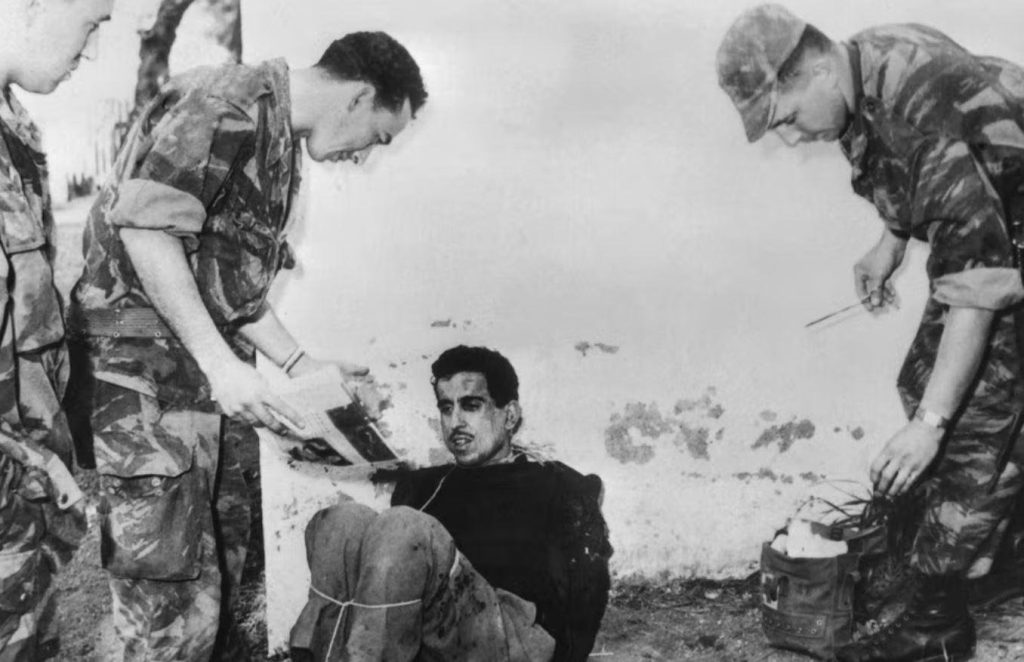 One telling fact is that Colonel Montagnac, who led French troops into the Algerian town of Skikda in 1843, subsequently boasted that his troops were beheading Arabs in the firm belief that locals could not live longer than 15 years. This French officer became notorious for killing civilians, even when the resistance had ended, and preferred beheading to imprisonment for his victims. Montagnac’s favourite strategy was the total extermination of the population, be they men, women, or children. An extract from a letter he wrote to a friend shows this: ‘You asked me what we did with the women. Some we kept as hostages, and others were exchanged for cattle or sold at auctions like a herd of sheep… These are our methods of fighting the Arabs, my friend. Killing men and loading women and children onto ships and sending them to the Polynesian islands. In short, exterminate all those who refuse to crawl at our feet like dogs.”

It is also worth referring to the views of our Turkish brethren, who have long found many similarities between French and Armenian racism. Commenting on France’s foreign policy some time ago, Ömer Çelik of Türkiye’s ruling Justice and Development Party pinpointed its bloody vectors.

In his comments, Omer Çelik said: “France, which claims to be turning to history, must first recall the crimes against humanity committed in Benin, Burkina Faso, Cameroon, Chad, Gabon, Guinea, Mauritania, Niger, Senegal, and Tunisia.” And all of the things he noted are irrefutable facts.

Yesterday’s speech by Bruno Retailleau has not a single true word.

“There are many sanctions against Russia. And no sanctions against Azerbaijan and Türkiye,” Retailleau was indignant. His hatred for the Turkic unity is clearly seen behind the senator’s calls to punish the two brotherly countries. In fact, this subtext was felt in all the debates of this shameful Senate session. Undoubtedly, only in this context should our MPs, the Milli Majlis, react to the French senators’ trick. In other words, they should pass a resolution on the fact of France’s mass crimes against Muslim peoples, reminding the proud French of their shameful past, i.e. the terrible atrocities in Algeria and Indochina. I think this will be the most correct and adequate answer. Everything is fair, and nothing personal, as they say.

The French senator is very monotonous in his attempts to tarnish Azerbaijan. He even stole his theses from another pro-Armenian populist, Boyer. Apparently, he found them eloquent enough, so Retailleau deemed it necessary to point to “Azerbaijan’s aggression against the sovereign territory of Armenia” and compare the situation to the Ukrainian events.

With such a lie, the senator incites himself, because he is trying to accuse Azerbaijan of resisting Armenian provocations on the notional border, which is officially documented, and about which the Azerbaijani Ministry of Defence has regularly reported. Moreover, such border incidents organized by Armenia have become a regular occurrence. Yet, Retailleau is silent about it!

Perhaps, this issue should be discussed in our parliament too, since the French MPs have once again gotten carried away with “unhappy Armenia” and have come to compare it to belligerent Ukraine.

In any case, we should raise the question of why the sovereignty of Azerbaijan is less important to French MPs than the sovereignty of Armenia. Or, for example, why the Parisian senators do not care that in spite of the Tripartite Declaration signed by Armenians themselves in November 2020, they still have not withdrawn the illegal armed groups from the Karabakh region of Azerbaijan, although they committed themselves to do so. Moreover, Prime Minister Pashinyan himself recently confirmed the presence of these armed gangs in Karabakh, describing them as a “defence army”.

I think our MPs will take this duplicitous attitude of the French MPs into account in their response to Paris.

Senator Retailleau’s subsequent expressions leave no doubt about his mindset – he is a racist. A blatant one. 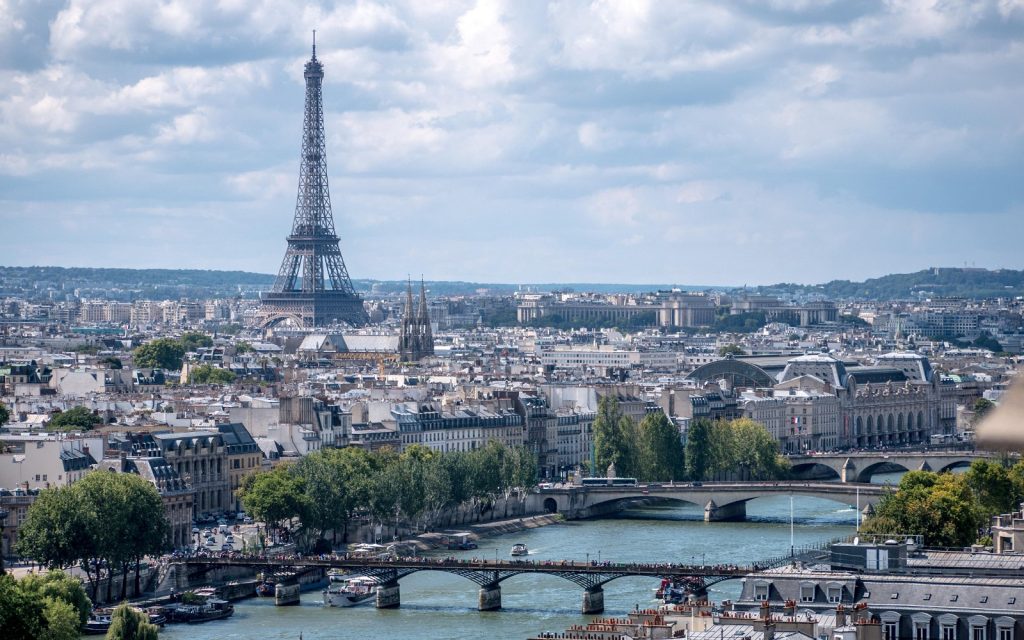 “Has Europe forgotten its values? This is not a local conflict; this is an element of Turkish imperialism, pan-Turkism,” he stated, claiming that “the Armenian people who survived the genocide found themselves in a tragic loneliness”. That is, the Armenian people are “sufferers in loneliness”, but Azerbaijan, with its thirty-year effort to liberate its lands, with the assistance of international negotiators, such as the OSCE MG, who have proved to be utterly inept, is for some reason the aggressor. Events are deliberately turned inside out, and the senator’s deceptive gestures are designed to lull the common sense of the French and the world public.

Europe has forgotten its values, Retailleau asks in a populist rush. And he is right – it has indeed forgotten about them when for thirty years it has not condemned Armenia for occupying Azerbaijani territories. Given that there have been four UN resolutions on the subject, why doesn’t Senator Retailleau, if he is so concerned about “bright Armenian happiness” and “violated sovereignty” answer the question of why he was silent for three decades about the occupation of a part of Azerbaijani territories and the threat to the sovereignty of our country? Where were his values then?

Apparently, the very blatant racism prevents the French senator from thinking objectively and honestly. And, alas, he is not the only one: hypocrisy and double standards of French senators are so clear, and their primitive and false accusations are so obvious even to a European audience, that hardly any other European politician will risk joining this absurd resolution – it will cost him too much. Only a very short-sighted person can support such a perversion of reality.

How shall we respond to this French racism? I think there will be an answer for sure. As for the Azerbaijani public, we must boycott the French goods imported to Azerbaijan – let the Armenophile senators take into account that the French manufacturers are suffering from their thoughtless actions. The reciprocal gestures, as already noted, must be tough and memorable – then, perhaps, the attacks of hypocrisy and racism of French politicians will become more curable.