After Samarkand Summit, the OTS charts a more independent course

The Samarkand meeting represented the major political gathering for the Turkic nations in 2022, and it will further facilitate dialogue and regional interconnectivity between the OTS member states—independent of Russian and Western influence. 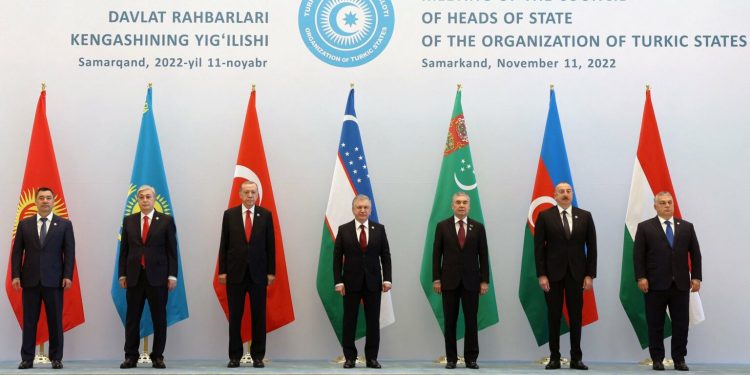 Heads of state stand during the 9th Summit of the Organization of Turkic States (OTS) in Samarkand, Uzbekistan, Nov. 11, 2022 (Source: AFP Photo)

On November 11, a summit of the leaders of the Organization of Turkic States (OTS) convened in Samarkand, Uzbekistan (Report.az, November 5). This major gathering came amid the OTS’s re-emerging significance as a key regional organization and a critical platform for rapprochement between the Central Asia and Caucasus regions. The official Samarkand Declaration, which was signed as a final accord by the attendees, paves the way for a comprehensive partnership format among the OTS member states (President.az, November 11).

The Samarkand meeting represented the major political gathering for the Turkic nations in 2022, and it will further facilitate dialogue and regional interconnectivity between the OTS member states—independent of Russian and Western influence. The ongoing global security cataclysms as well as the economic and energy crises caused mostly by Russia’s military intervention against Ukraine, followed by Moscow’s deteriorating relations with the Central Asian states, have made the OTS’s reincarnation inevitable. As a short-term impact of the Ukraine war, Turkey and Azerbaijan have managed to deepen bonds with Central Asia by offering safer, alternative transit routes as more local carriers refuse to conduct operations on routes that pass through Russian territory due to Western sanctions.

In this vein, Azerbaijan established bilateral, trilateral (with Turkey) and multilateral cooperation formats with the Central Asian states in a number of fields, particularly energy and trade. The eagerness of Central Asian states, particularly Kazakhstan and Uzbekistan, to engage more deeply with Azerbaijan and the OTS should not come as a surprise, as the newly shifted geopolitical order in the post-Soviet region has enabled the rise of significant alternative transportation corridors, including the Trans-Caspian International Transportation Route, also known as the Middle Corridor. As the most effective option for the landlocked Central Asian region, the Middle Corridor offers safe and fast access to the European market via the Caspian Sea.

As such, Azerbaijani President Ilham Aliyev’s official visits to Uzbekistan in June and September 2022 were attempts to boost bilateral cooperation with Tashkent, especially regarding transit (Azertag, September 16). In total, 18 documents were signed during Aliyev’s two visit, which included agreements to expand bilateral cooperation in defense, transportation, agriculture and trade. These accords were officially ratified on October 10 (Azertag, October 10). Unlike Kazakhstan and Turkmenistan, Uzbekistan, which has no access to the Caspian Sea, is keenly eying the opportunity to join the Baku–Tbilisi–Kars railway, the region’s primary transit link, to increase the volume of exports to Turkey, as well as Central and Eastern Europe. Moreover, as Baku promotes its bilateral partnership with Tashkent, this simultaneously paves the way for greater cooperation in the Azerbaijan–Turkey–Uzbekistan format. Given the successful experience with the Azerbaijan–Georgia–Turkey and Azerbaijan–Turkey–Pakistan cooperation formats, Baku is now keen to establish a similar format with the respective Central Asian states.

Obviously, Azerbaijan’s pivot to Central Asia is not limited to the Baku-Tashkent cooperation format but envisages a broader picture. Indeed, the existence of critical transit and energy infrastructure makes Baku more attractive as a partner and transit hub. The first official visit of Kazakhstani President Kassym-Jomart Tokayev to Baku in August 2022 was another attempt by a Central Asian state hoping to bolster cooperation with the South Caucasus region (Astana Times, August 24). In Kazakhstan’s case, which now faces severe pressure from the Kremlin due to the refusal of the Kazakhstani authorities to side with Russia in its unprovoked war against Ukraine, the turbulent relations between Moscow and Astana have led the latter to integrate more into the OTS and consider opportunities to re-route its crude oil shipments away from Russia (Bne.eu, September 8). As a result of the numerous Kazakhstani oil shipments blocked by the Russian authorities through the Caspian Pipeline Consortium (via Russia), Kazakhstan’s main oil company, KazMunayGas, held several discussions with the Azerbaijani State Oil Company to allow 1.5 million tons of Kazakhstani crude per year to be sold through the Baku–Tbilisi–Ceyhan (BTC) oil pipeline (Trend.az, August 12). On November 10, Kazakhstani media reported that Astana will start transporting its oil through the BTC pipeline starting on January 1, 2023 (Apa.az, November 10).

The recently intensifying dialogue between Baku and Astana has grown significantly with the signing of the Baku Declaration on Cooperation in the Transport and Communications Spheres between Azerbaijan, Turkey and Kazakhstan on June 27 (Caspian News, June 28). Seemingly, Kazakhstan is willing to engage more with Azerbaijan and Turkey not only in the OTS format but also in a trilateral format to create a counterbalance against Russian and Chinese influence in the region.

Given this renewed cooperation record, another regional state and strong Russian ally, Kyrgyzstan, has taken tangible steps to obtain a more active role within the OTS framework and develop bilateral partnerships with Azerbaijan and Turkey. To this end, on October 11, Aliyev landed in Bishkek to meet with his Kyrgyzstani counterpart, President Sadyr Japarov. The official visit was a logical continuation of Azerbaijan’s pivot to Central Asia and brought Kyrgyzstan closer into the OTS orbit (Apa.az, October 11). As a result of the visit, the Kyrgyzstani-Azerbaijani Development Fund was established with an authorized capital of $25 million (Azernews, October 11). A similar foundation has been created as a result of the Samarkand Declaration, from the latest OTS summit, that envisages the establishment of a Turkic Investment Fund, the first joint financial institution established among the Turkic states, to mobilize the economic potential of the OTS member states (Daily Sabah, November 12).

With the waning influence of Russia in the post-Soviet space, the OTS is becoming more attractive, and more regional states and countries across the globe are eager to cooperate with it. The fact that the OTS member states possess rich natural resources and are geographically at the crossroads of East and West elevate the organization’s global profile. Yet, more importantly, the OTS is a platform that aims to eschew the influence of global or regional third parties as much as possible, which makes it a more flexible and independent grouping. In this regard, the OTS member states aim to develop a new foreign policy agenda that will enable them to attract additional investments and open up the potential for the establishment of new energy and transit hubs between Asia and Europe.