Out of his tree: Medvedev questioned sovereignty of Georgia and Kazakhstan

Great Russian chauvinism in action. A broken record has contributed to the ephemeral sentiment that fuels Russia's inferiority complex. 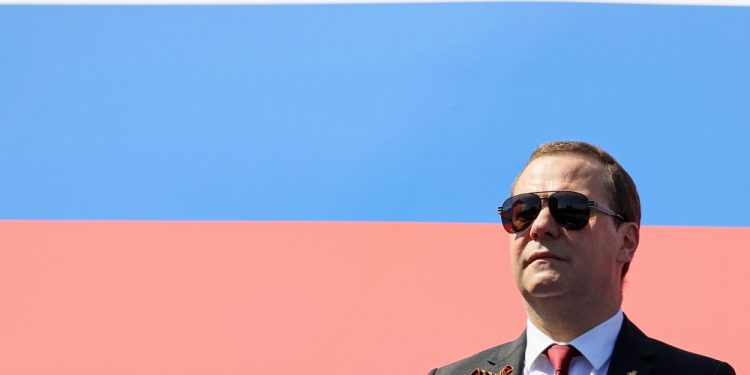 Incredible as it may seem, the USSR, of which Russia is the successor, is following the algorithm of Adolf Hitler’s actions step by step. To use an analogy, Hitler seized the Sudetenland on the pretext of protecting the rights of the German ethnic minority there.

Without a second thought, Russian President Vladimir Putin did the same with the Donbas problem. But there’s the rub: in Hitler’s case, it was an annexation, but in Ukraine, Putin is conducting a “special operation”.

But this is not the appalling part either. The real problem is that Russian officials talk such nonsense that if they were the president of Russia, they would answer for their bullshit, as the saying goes.

Take, for example, Dmitry Medvedev, deputy chairman of the Security Council of Russia. He was president of the Russian Federation for four years and all he is remembered for is his mocking tirade: “There is no money, you hang in there”, and his dancing. And yet, despite all his slip-ups, Medvedev has his sights set on the Russian presidency.

Medvedev chose not to reinvent the wheel and followed the trail blazed by Putin.

As we know, Vladimir Putin’s dream is to rebuild the Soviet Union. It was not for nothing that he once said that for him “the collapse of the USSR was a tragedy and the disintegration of historical Russia”. “The state lost 40% of its territory, production capacity and population, as well as what had been built up over a thousand years,” he said.

And so, dreaming of the presidency, Medvedev posted on his Vkontakte page a text in which he argues that Georgia and Kazakhstan owe their existence to the Russian Empire. He says that it is time to put an end to “sovereignty parades”, claiming that Russia “will launch the next campaign to restore the borders of our Motherland”.

According to Medvedev, Georgia was created in its current borders only within the Russian Empire, and Kazakhstan is an “artificial state”.

“There will be no order until Russians get there,” the post reads.

It looks like Dmitry Medvedev is a stranger to history. When the kingdom of Colchis (present-day Georgia) existed, Russians roamed forests in search of spruce cones and mushrooms. The ancient Georgian kingdom of Kakheti is even described in Homer’s Odyssey. But Medvedev does not care about that. The most important thing for him is to follow Putin’s commandments.

Those commandments are simple: to bring back the USSR and to revive the Russian empire in the process. Medvedev is trying to implant into the minds of the international community the delusional idea that where there are Russians, there is order. Vietnam, Afghanistan, Syria, Libya… There was a Russian hand in all those places, but there was no order. Or does Medvedev think that the 366th regiment, which was actively involved in the Khojaly genocide, was also imposing order?

It appears that all is not well in the Russian political establishment. Failures on the Ukrainian front are affecting the state of mind even of high-ranking officials. At the same time, we must acknowledge that this is a wake-up call. The “Russian bear” is on a rampage. Medvedev might very well start laying claims to Australia. Why not? You cannot grasp Russia with your mind…

P.S. Jokes aside, Azerbaijan too may end up on the menu of the Russian sperm whale. But, if we take into account the Turkish factor, Moscow can do nothing in Baku. It will have to go back empty-handed.