Ambassador of Azerbaijan Ali Alizade has issued speciall message on the occasion of Natioanl Day of Azerbaijan. Here is the text of his message. 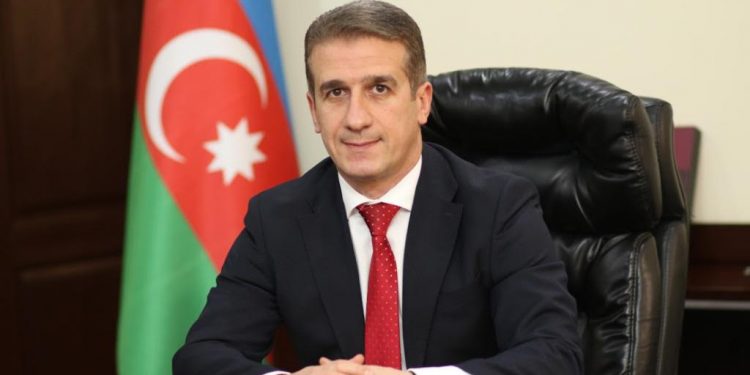 ‘This year Azerbaijan celebrates the 103rd anniversary of the establishment of Azerbaijani Democratic Republic (ADR), the first democratic republic in the Muslim world,with double and special significance,afterthe liberationof the internationally recognized territories from almost 30 years of illegal Armenian occupation.

The ADR left an indelible mark and entered forever into the history of Azerbaijani nation with its rich state building experience and prepared a good basis for the future independence of Azerbaijan. As the successor of ADR, Azerbaijan regained its independence in 1991 and after coming to power of Heydar Aliyev, the National Leader of Azerbaijan in 1993,Azerbaijanhas overcome through the hard and strict tests of history and embarked on the path of development, ensuring stability and confidently moving forward.Relying solely on the support of the Azerbaijani people, H.Aliyev put an end to all negativity in the country, disbanded all illegal armed groups, established safety and order, and began building the state institutions and a regular army of Azerbaijan. All these years Azerbaijani nation lived with one dream, to liberate the illegaly occupied territories of Azerbaijan and restore peace and justice in the region,which Azerbaijan has seeked almost 30 years through all platforms.

If the creation of ADR, on May 28, 1918 was a historic event for Azerbaijani nation, the restoration of the territorial integrity of the modern independent Azerbaijan in 2020 became another glorious historic victory and achievement for Azerbaijan and its nation.For all 30 years of the conflict, Azerbaijan has suffered a lot from Armenian aggression and Azerbaijan has been delivering the truth about this issue at all international events and forums. More than 30 thousands of Azerbaijanis have been martyred, all cities, residential buildings, schools, hospitals, public buildings, historical sites and mosques in occupied territories of Azerbaijanhave been destroyed. Armenia insulted the entire Muslim world, kept cows and pigs in our mosques, destroyed all cultural monuments and even plowed up all graves. Despite that all leading international organizations recognized and supported the territorial integrity of Azerbaijan and demanded withdrawal of Armenian troops from Azerbaijani territories, Armenia has always showed unconstructive approach to the resolution of the conflict and at the end the provocative steps, statements and aggressive actions of Armenia haveput an end to all negotiations and made war inevitable.Under the resolute command of the Supreme Commander-in-chief, Azerbaijan has fulfilled its historic mission and defeated Armenia due to professionalism and heroism of victorious Azerbaijan Army, and of course due tohigh national spirit and strengh.Glory to Allah, thanks to the dedication of our martyrs, Azerbaijan has again secured its territorial integrity. May Allah grant all our martyrs the highest rank in Jannah!

We have achieved our goal.The 44-day Patriotic war has demonstrated Azerbaijan’s power, resolve and unity. It showed that the Azerbaijani people will never put up with injustice. We must also mention that Azerbaijan has liberated its lands through development, because development is also the backbone of our victory, and today, Azerbaijan is one of the rapidly developing countries of the world, and under the leadership of President Ilham Aliyev continues its dynamic progress and economic growth.And soon the liberated territories of Azerbaijan will also become one of the developed regions of Azerbaijan and a real paradise.

We are thankful to our brotherly country Pakistan and its nation which constantly stood shoulder to shoulder with Azerbaijan and supported its right of self-defence during Patriotic War of Azerbaijan. Pakistan even didn’t recognize Armenia due to occupation of Azerbaijani lands and always put its prinsipal position in the conflict between Armenia and Azerbaijan. During the years of the occupation of Azerbaijani territories by Armenia, the Senate and National Assembly of Pakistan adopted several resolutions, Foreign Office and Armed Forces of Paksitan issued many statements condemnig the illegal actions and war crimes of Armenia against Azerbaijan.This is a true demonstration of brotherhood. Azerbaijan has also always stoodand supported Pakistan in all matters, including the Kashmir issue which also waits implementation of UN SC resolutions for several decades. I am sure our brotherhood and  mutual support to each  other will be continued and strenghened in the years ahead as well.

Pakistan and Azerbaijan have time tested relations which based on strategic partnership, confidense, mutual respect and trust. In the last one year Covid-19 pandemic has caused worldwide slowdown, but even in pandemic time Azerbaijan-Pakistan relations,the political, military, defence, economy, security, and energy ties have continued to grow in upward trajectory.The leadertship of two countries had a regular constructive meetings and telephone conversations where they hailed the importance of further strengthening the efforts to boost cooperation between our countries. Despite the restrictions caused by pandemic we were able to hold bilateral political consultations, the meeting of Joint Working Group on Trade, online bussiness forum, B2B meetings and as well as the trilateral meeeting of FMs of Azerbaijan, Pakistan and Turkey. During the last year, we were also able to conduct several high level visits of government and military officials, including an official bilateral visit of FM of Azerbaijan to Pakistan, the bilateral official visits of Chairman Joint Chiefs of Staff Committee of Pakistan and the Chief of Air Staff of Pakistan to Azerbaijan, etc. Soon an official visit of Speaker of Milli Majlis (Parliament) of Azerbaijan to Pakistan will be conducted, the meeting of the Joint Working Group on Agriculture, the meeting of Intergovernmental Joint Commision will be arranged, the visits of Chief of Naval Staff of Azerbaijan to Pakistan and the Chief of Army Staff of Pakistan to Azerbaijan, as well as Azerbaijan, Pakistan and Turkey joint military exercise will be held during this year.The efforts for strenghening people to people contacts, cultural, media, science, education ties have also increased and the humanitarian-social projects of the Heydar Aliyev Foundation of Azerbaijan were also continued in Pakistan during this pandemic time. The establishment of direct flights remainsalso one of our main aims and the agreement have already reached to start operations of direct flights as soon as Covid -19 situation will be setlled down. All these developments show the committment of our fraternal nations and Governments to further deepen and strengthen our relations.

I thank the Government, Army and people of brotherly Pakistan for continued cooperation, support and commitment to further deepen our relations. Taking this opportunity, I congratulate Azerbaijani community in Pakistan and all my countrymen on the occassion of National Day, “May 28- Republic Day of Azerbaijan”. Pakistan-Azerbaijan Dosti Zindabad!