The masks are off, ladies and gentlemen! Poland declares war on Israel.

On Saturday (!), August 14, 2021, President of Poland Andrzej Duda signed the “restitution law”. Whether it was a deliberate act or a coincidence, but it was on a day sacred for the Jewish people that the surviving prisoners of Nazi death camps, as well as descendants of the six million Holocaust victims, who live today across a vast territory from Canada to Australia, found out that Poland took away their right to compensation and reclamation of the property confiscated from their families in the Holocaust and after the war. 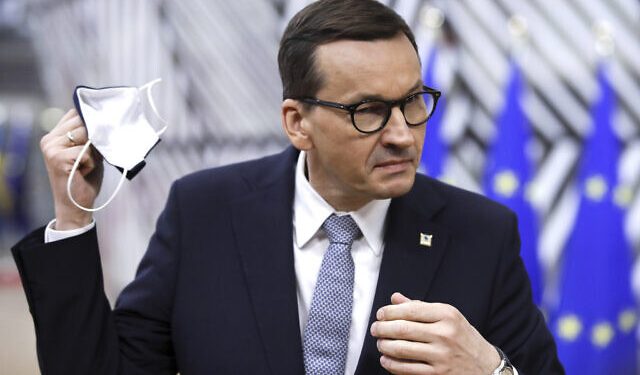 Poland’s Prime Minister Mateusz Morawiecki speaks with the media as he arrives for an EU summit at the European Council building in Brussels, on May 24, 2021. (Olivier Hoslet, Pool via AP, File)

The bill approved by Duda will result in the dismissal of 90% of claims for recovery of Jewish property appropriated by Nazis and the Communist regime of Poland. It also means that it will be no longer possible to contest Communist-era restitution-related rulings in court.

The new law resulted in the largest confrontation between the two states in history.

Why did Poland adopt a law that so flagrantly and defiantly tramples on the civil rights of millions of people, disregarding the protests from Israel, the warnings from the European Union and the recommendations from the United States?

Why is Poland, who continues to accuse Russia of deliberately distorting the history of World War II, doing essentially the same thing? Why is the Polish state publicly rewriting the history of the Holocaust, claiming that Poles, whose involvement in the murders of hundreds of thousands of Jews, in pogroms and looting of other people’s property has been well documented, are as much the victims of Nazism as Jews are?

Why did 309 deputies of the Polish Sejm (not a single vote against, 120 abstentions) vote in favor of the “restitution law”, when they could not but realize that such “legislation” means grave ramifications for Poland, up to losing the EU membership?

Let’s try to figure this out.

One of the versions that explains Poland’s painful reaction to the calls of the world community to return the lost Jewish property to its owners boils down to banal antisemitism: the genetic aversion for “żyds” is so deeply and firmly ingrained in the collective consciousness of Poles that it regularly pushes them to extremely thoughtless actions. As a result, Poland today is the only EU country that has not adopted national legislation on restitution and compensation for the property confiscated by the Nazis during the Holocaust or nationalized by the post-war Communist regime.

Well, the antisemitism version as the only reason for the “restitution law” looks quite convincing.

3.3 million Jews lived in Poland before the occupation in September 1939. It was the largest Jewish community in Europe that also made up 10% of the country’s total population. But only 380 thousand remained of it at the end of the war. Most Polish Jews left Poland because they came home from the Nazi and Stalinist concentration camps to find their houses and apartments already occupied by Poles.

About 5,000 Jews live in Poland today, most of them elderly people.

When the Communist regime fell in Poland in 1989, the owners of the lost property launched an active campaign, demanding from the authorities either the reclamation of their property or monetary compensation. Tellingly, that was not so much about the compensation for the looting during World War II as about the misappropriation of Jewish property in the post-war period, when another surge of Polish antisemitism occurred. A US State Department report from 1946 declassified in 2018 documented that Poles treated Jews as badly as, if not worse than Nazis, before, during and after World War II.

“There is little doubt,” the report said, “that the current anti-Jewish manifestations in Poland represent a continuation of activities by rightwing groups that were at work before 1939, when even major political parties had antisemitic programs.”

And one certainly cannot dismiss US Secretary of State Antony Blinken’s statements on Polish antisemitism during his recent visit to Germany as biased.

Recalling the family history of his stepfather Samuel Pisar, whose family perished in death camps, Blinken spoke of the plight of Jews in Bialystok, Poland, where bigoted residents burned the beards of rabbis and torched synagogues long before World War II and the Holocaust, as well as of the Poles who refused to speak out against the Nazis and the persistent, systematic attacks on Jews.

“The evil was visible,” Blinken said. “Everyone in those cities knew that Jews lived there. They knew the trains were leaving [for death camps], packed with people day after day… Most chose to look away, to do nothing.”

There is, however, another version: Poland has adopted the restitution law because it cannot afford to pay back the descendants of its citizens.

What amount are we talking about? If we proceed from the nominal per capita GDP of this country in the last pre-war year (1938), then the “Jewish debt” of Poland today amounts to over 300 billion dollars at the current exchange rate! This is three and a half times higher than the revenues of the country’s current budget, or half of Poland’s 2020 GDP.

The amount is clearly more than impressive. Nevertheless, Poland, whose current per capita GDP is $34,000 and economic growth rate is one of the highest in the European Union, might well cope with this financial burden. As a last resort, the ruling Law and Justice Party (PiS) could compromise and follow the Swiss example. Switzerland, as you may recall, paid out a $1.25 billion settlement to Holocaust survivors and their heirs (according to various estimates, dormant Swiss bank accounts of Jews killed in the Holocaust contained from six to fifteen billion dollars, and tens of thousands of heirs of the victims claimed those assets), after which this matter, painful and detrimental to Switzerland’s international image, was put to rest forever.

However, the main discourse in Polish society boils down to the complete illegality of Israel’s claims against the Polish government and rules out any possibility of concession, which will be perceived by the public as an act of surrender and collective humiliation. It is no coincidence that the popular Polish weekly Do Rzeczy, consistently hyping up the “Polish Holocaust”, claims that Poles once suffered much from both Germans and Jews, illustrating its texts with pictures like this one:

The masks are off, ladies and gentlemen!

Is it any wonder now that Poland continues, with tenacity worthy of a better cause, to present itself as a victim of Nazism, demanding compensation from Germany, denying involvement in the physical extermination of at least 200,000 Jews and seeing no objective reasons for compensating the descendants of its Jewish citizens?

What is the real reason? Antisemitism? Greed? Overinflated national ego? Most likely, all three.

“I can only say that as long as I am the prime minister,” Prime Minister Mateusz Morawiecki said after the voting at the Sejm, “Poland will certainly not pay for German crimes. Not a single zloty, euro or dollar.”

Israeli Foreign Minister Yair Lapid, who urgently—and indefinitely—recalled the Israeli ambassador in Warsaw and recommended that the Polish ambassador to Israel should spend summer vacation in his homeland, responded, “The prime minister of Poland should check the facts again. Millions of Jews were killed on Polish soil, and no legislation will erase their memory. We’re not interested in Polish money and hinting at such is antisemitic. We are fighting for the memory of the Holocaust victims, for the pride of our people, and we won’t allow any parliament to pass laws whose goal is to deny the Holocaust.”

The political pride and national ambitions of Poland’s leaders plunge the country into a reckless war on the historical front with countries and nations that suffered immeasurably great losses in World War II, thereby dooming Poland to a national disgrace and inevitable political bankruptcy.

As Napoleon said, nothing is too small for a great man. Poland still has time to rethink its position, climb down its tree of greatpowerness and save its reputation for future generations as a modern, advanced, democratic state that fully shares universal human values.

In the meantime, the younger generation represented by the far-right All-Polish Youth dumps a pile of bricks outside the Israeli Embassy in Warsaw and explains on its Facebook page: “To be clear: they deserve nothing, not even a brick. But we decided to go out on a limb and give the entirety of the claim that they could claim by dumping a ton of rubble under the Israeli embassy. We slightly exceeded the value of what was left after the war, but it’s nothing—we don’t need the rest. Here is your property!”

It seems that Israel does not need anything from Poland either. As a character of a historical novel might say, “The masks are off, ladies and gentlemen!”