Post-truth and a triumph of the absurd

I have noticed during the quarantine period that the loathing for science, reason, and rational critical thinking that has been growing in our society in the recent years took on a new manifestation: most believe the misinformation spread by dubious third-rate websites, they believe the cheap conspiracy theories of social media accounts willing to cook up anything for three extra likes, they believe those thoughtlessly reposting everything and anything just to be the first to repost it. 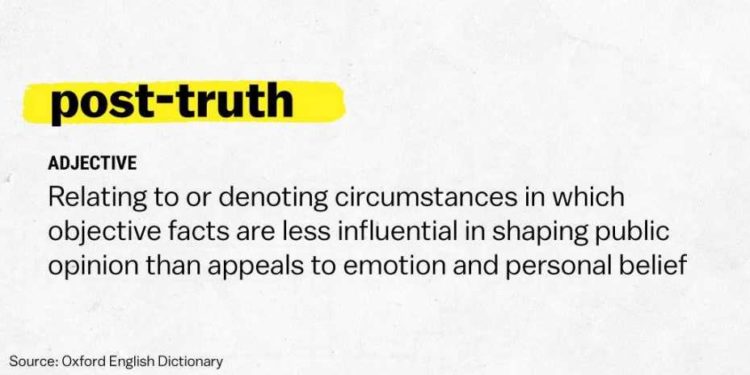 If we don’t start to unravel where this expanding global anti-intellectual, anti-scientific rhetoric comes from, we may find ourselves in a very difficult situation in a time when the world is preparing for serious changes. Why do people easily believe in lies and nonsense? Why new mystical teachings, Indian gurus and sham preachers keep emerging every day against the backdrop of a rapid technological progress? Why do people readily swallow populist soap bubbles wrapped in the “I’m with the people” slogans? What created such a fertile ground for all kinds of fraud and drivel?

In 2016, the Oxford Dictionary chose post-truth, one of the most frequently used terms of the new century, as the word of the year. This was followed by a wave of research and books analyzing this concept and interpreting through it many issues of the new era. Well, what is this post-truth?

The prefix post-, as we know, means “after“. But this is not about something that comes “after truth.” The Oxford Dictionary even makes a special warning about the prefix post- in this term: the meaning of the prefix has expanded to also mean “belonging to a time in which the specified concept has become unimportant or irrelevant”. Hence, post-truth is devaluation, invalidation of truth. 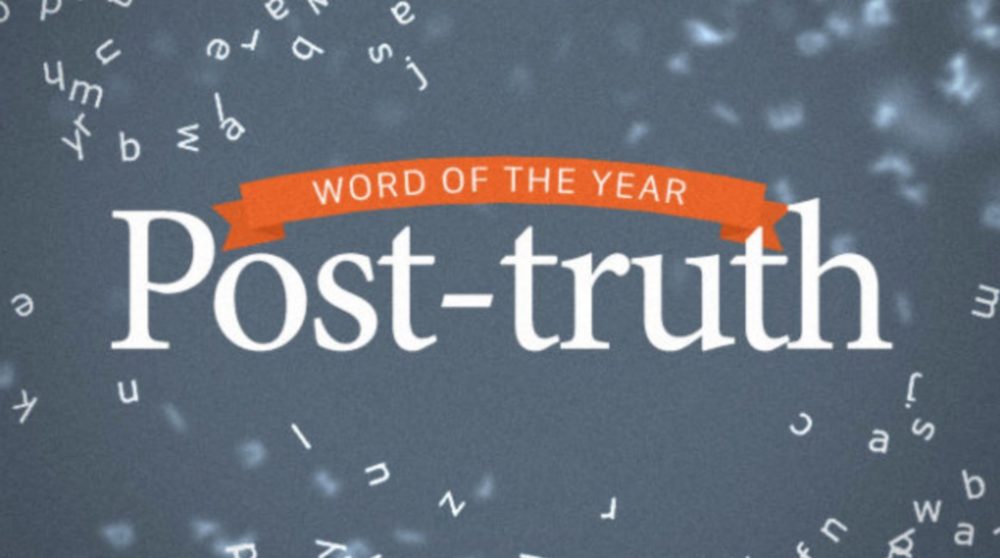 Post-truth is a phenomenon of the new era, the age of the Internet and social media. To understand it properly, we need to have some historical background. An important note: the following list is nominal, and, like with all generalizations, there are points that are overlooked or touched upon only superficially.

In pre-modern times (period preceding modernism), God was the only source of explanation and reference for man. For people of this era, the world was confined to that within a visible distance and was perceived instinctively.

The invention of the printing press brought on the stage of history Modernism, with capital letter M, including rationalism, humanism and other important components. In the era of Modernism, formed by Rene Descartes’s “I think, therefor I am” and Immanuel Kant’s “Dare to know”, the central focus shifted from God to man. Modernism invented the concept of “reality” by asking questions about things that were previously believed to be matter-of-course and self-evident. In fact, the concept of reality we use today in a variety of senses is a discovery of Modernism. After spending a whole premodern era explaining all the good and bad things around them with “God’s will”, people suddenly started to question that will. To avoid a terminological chaos, let us note that this Modernism should be distinguished from the aesthetic modernism of the twentieth century, which was related mostly to art. Modernism here is a broad concept that existed from about the end of the 15th century to the 1960s.

In the age of Modernism, the source of information was first books, newspapers, and then radio and television. Although different in form, this information was transmitted from one single center, so people blindly accepted whatever was presented to them, as in the Soviet era. At that time, intellectuals and scientists were in high regard.

With the advent of postmodernism, the focal point, the center disappeared. This was already the world of personal computers and virtual networks. It marked the end of the Cold War, and, in the words of Leslie Fidler, the era of “crossing the borders and closing the gaps” began. Thus, human beings entered a new age in which they are ruthlessly bombarded with information.

While it was the traditional, conventional media—newspapers, radio, and television—that served as the information tools of Modernism, in the postmodern era this role belongs to the “New Media,” that is, everything in the borderless, boundless and fast world of the Internet. Note that the principle of operation of many media outlets, which feel the need to adapt to the new but still cannot break away from the old, is roughly as follows: the information is first published in the paper and posted on the site the following day. But today’s information is already trash by tomorrow, because by tomorrow, it will have been already acquired from other sources. I think everyone has felt the efficient power of online media during the quarantine period. What newspaper could adapt to the pace of the recent days when a new decree is issued almost every day?

However, for all the free space postmodernism has created in art, for all the stiff, mossy, fossilized stereotypes it has destroyed, it has had a detrimental effect on fundamental issues. First of all, postmodernism essentially giving a blank cheque to everything without exception has resulted in an attack on science, rational thought and intellectual opinion. For example, rejecting authority and accepting the “anything goes” principle may work in the art world, but it becomes problematic when applied to healthcare, where human life is at stake. If the “anything goes” principle is allowed here, then someone who, say, could easily get effective treatment from professionals, turns to alternative medicine, or to a psychic instead of a psychologist. This is why those of philosophers, who are critical of postmodernism, such as Habermas, believe modernism to be an unfinished project that needs to be fixed. In fact, postmodernism in politics benefits authoritarians, fascists and conservatives the most: it is a problem for them when intellectual and scientists, i.e., people of researched and tested knowledge, get a voice. So, the best thing to do in the simulacrum of “democracy and pluralism” is to declare everyone’s opinion “valid.”

The post-truth phenomenon is also one of the metastases of postmodernism. Note that in recent years, the rhetoric of many figures in world politics (Erdogan, Trump) on the global level and the reactions to events at the local level have been tinged with insult aimed at rational thought, science, intellectual opinion. Anachronistic forces that use the power of social media for their own purposes discredit the truth. How do they do this?

Although the phrase post-truth was first used in an article by Serbian-American scholar Steve Tesich in 1992, the term took root after the release of Ralph Keyes’ 2004 book, The Post-Truth Era. Several points are highlighted in this book and in subsequent studies. In the post-truth era, social media create an echo chamber: you only hear what you say, you are only shown the brands and opinions that you like and agree with, so there is no counter-argument, no doubt, no monitoring. You fall into an information prison that looks like you and repeats your voice. It polarizes, divides, alienates people and makes them easier to manage. Eli Pariser called it a “filter bubble” in a 2011 article. Everyone is in a balloon filtered to their liking, and all those of dissenting opinions are considered enemies.

The Massachusetts Institute of Technology has recently conducted a study and found out that lies spread 6 (!) times faster than truth on social media (maybe we should mentally divide by six the nonsense that various popularity chasers have been feeding us?). Since Trump was elected president, since Brexit, more research has been done on post-truth, serious scientists are sounding the alarm about it, and sensible writers are writing dystopias about it. For example, star of meta-modernist prose Dave Eggers explores the social implications of virtualization in his novel The Circle. In the Orwellian style, he talks about the privacy of private life being deformed under the guise of a good cause.

But there are those who think otherwise. For example, Peter Huber takes an anti-Orwellian stance in his study Orwell’s Revenge: The 1984 Palimpsest. I was amused to see this title on Mark Zuckerberg’s “A Year of Books” selection.

In his Discipline and Punish: The Birth of the Prison, Michel Foucault recalls Jeremy Bentham’s famous “panopticon” model, describing how the “model of a discipline society” is built and the concept of biopower that influences our biology and gradually begins to govern us. The panopticon is a model of a prison with a guard tower in the center and endless floors of cells around it. The guard in the tower always sees the prisoners, but they do not see the guard. Foucault writes that the “novelty” of the panopticon model is that those in the cells never know whether they are being watched or not, and they gradually start to think that they are being monitored all the time.

It seems to me that in the post-truth era we will be frequently reminded of Orwell’s 1984, Huxley’s Brave New World, Golding’s Lord of the Flies, and Zamyatin’s We.