On April 10 – 13, 2021, the ADA University hosted an international conference entitled: “New Vision for South Caucasus: Post-Conflict Development and Cooperation”.  In this historic event the President of Azerbaijan H. E. Mr. Ilham Aliyev has participated and delivered a keynote speech to the international audience that consisted of university leaders, international diplomats, experts in global affairs and renowned journalists. 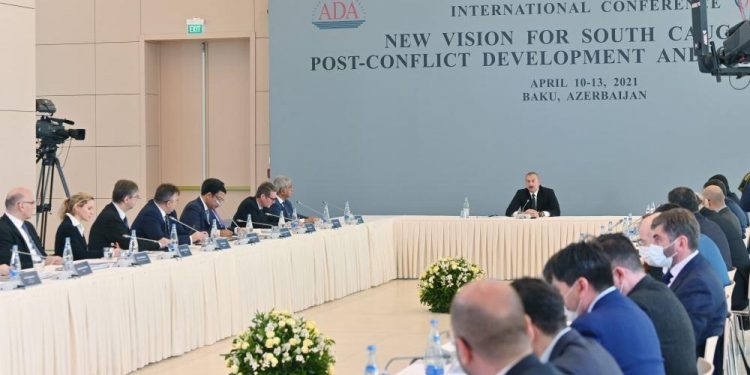 The Azerbaijan State News Agency (AZERTAC) provided a media coverage to this international conference that has made significant contributions in understanding the current geopolitics of Southern Caucasus and has proved to be crucial in the strengthening of economic development and peaceful coexistence, fostering constructive dialogue among all nations across Europe.

The following is an excerpt of the statement presented on April 13th, by the Head of State of the Republic of Azerbaijan.

“-Thank you. First of all, I would like to express gratitude to ADA University, and to rector Mr. Pashayev for organizing such an event. I am glad that ADA University within the relatively short period of time became one of the leading universities in Azerbaijan and has very broad international connections. Also, I’m very grateful to the participants of the conference for their participation, because as you can imagine the situation after war is very fragile. Though the ceasefire is being maintained still there are a lot of questions about post-conflict development and the topic of the conference is post-conflict development and cooperation. Therefore, once again, thank you to all the participants for your attendance. We consider this as not only a sign of interest to what is happening here in the region but also as a sign of your solidarity with the people of Azerbaijan who suffered from Armenian occupation for 30 years.”

The President of the Republic of Azerbaijan Ilham Aliyev emphasized: “Before talking about post-conflict development we need to understand that our lands were under occupation for 30 years and we cannot exclude our memory, the memory of those who lost their family members, the member of those who were deprived from the fundamental right to live on their own lands.”

The atrocities and crimes committed by the Armenian Armed Forces against the civilian population of Azerbaijan were in the focus of the President’s speech:

“We cannot forget the atrocities committed by Armenian army. We cannot and will never forget Khojaly genocide and the innocent victims of Khojaly genocide organized by the leaders of Armenia and the so-called Nagorno-Karabakh regime. Therefore, it’s very important to understand that this memory will be with us. We will keep it in our heart. At the same time, we need to look to the future. Also, the destructions on the territories which we liberated are beyond all our worst expectations. Because we more or less knew what Armenians have done to our cities and villages. Because there have been from time to time some video footages some information from some international representatives who managed to visit those lands.

Probably you know that foreigners who were illegally visiting then Nagorno-Karabakh were deprived of visiting the territories which you have visited. They were deprived of going to Aghdam, to Fuzuli, to other territories which surrounded the former Nagorno-Karabakh administrative district. Because Armenian government didn’t want foreigners to see the devastation and to see their hatred to Azerbaijanis, because it’s clear that those destructions and devastations were done after the first Karabakh war stopped. Because it’s not possible to destroy the cities and villages during the war.

They did it deliberately in order to erase the legacy of Azerbaijani culture in order to erase these territories from our memories, in order to change the origin of those lands. Therefore, we need to understand the feelings of Azerbaijani people and now when we returned to those lands and we see with our own eyes what the occupation of Armenian forces did to our historical monuments, religious monuments, to our cities and villages. Of course, this is a very important factor in order to understand our steps with respect to post-conflict situation. You are all very well aware of what happened. You were involved in this process you know. So, there’s no need for me to make a long speech talking about 30 years of occupation. Probably I will conclude now in order to have more time for discussions. So, thank you once again for being with us.”

At this conference, the Assistant to the President of the Republic of Azerbaijan-Head of the Department of Foreign Policy Affairs of the Presidential Administration Mr. Hikmat Hajiyev, served as a moderator and invited the international guests to share their thoughts and comments.