President of Kyrgyzstan Sadyr Japarov received the Ambassador Extraordinary and Plenipotentiary of Azerbaijan to Kyrgyzstan Hidayat Orujov. Press service of the head of state reported. 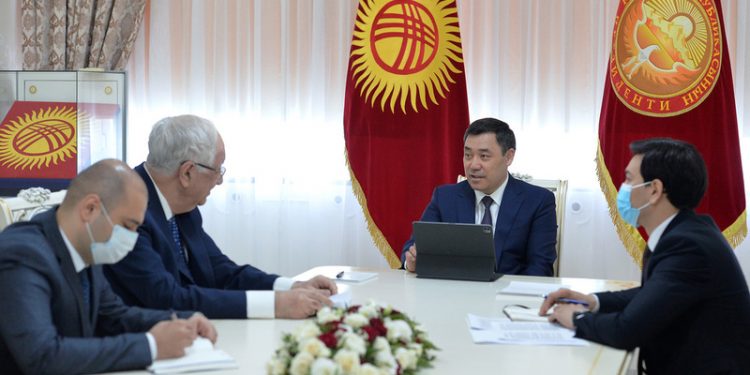 The parties exchanged views on the issues of enhancing cooperation between the countries in the political-diplomatic, trade-economic, social-humanitarian and other spheres. The President noted that Kyrgyzstan attaches great importance to further development of traditional friendly relations with Azerbaijan. He stressed importance of supporting political dialogue at the high and highest levels.

The Kyrgyz side expects official visit of the leader of Azerbaijan Ilham Aliyev to the country.

Sadyr Japarov noted that one of the key directions for further development of relations between Kyrgyzstan and Azerbaijan was diversification of economic cooperation, which has significant but unrealized potential.

To improve the situation, he proposed to intensify trade and economic interaction between the states by holding a meeting of the intergovernmental commission in 2021, visits of representatives of the business community, as well as implementation of mutually beneficial economic projects.

The head of state thanked the Azerbaijani side for financial assistance in implementation of two projects — construction of the Kyrgyzstan-Azerbaijan Friendship Park and the Heydar Aliyev secondary school in Bishkek. He expressed confidence that these projects would be completed by the upcoming visit of the leader of Azerbaijan to Kyrgyzstan.

Sadyr Japarov also touched upon the issue of resumption of direct air communication between Baku and Bishkek, proposing to speed up its consideration.

The Ambassador Hidayat Orujov noted the great unused potential for development of economic cooperation, expressing readiness of the Azerbaijani side to attract new investments to Kyrgyzstan. He especially noted that Azerbaijan supports the reform policy pursued by Sadyr Japarov, and on behalf of the leadership of his country invited the head of state to visit Azerbaijan.