Armenia’s Acting Prime Minister Nikol Pashinyan and Russian President Vladimir Putin discussed the return of Armenian military personnel from Azerbaijan in their phone call on Thursday, the press service of the Armenian Cabinet of Ministers reports. 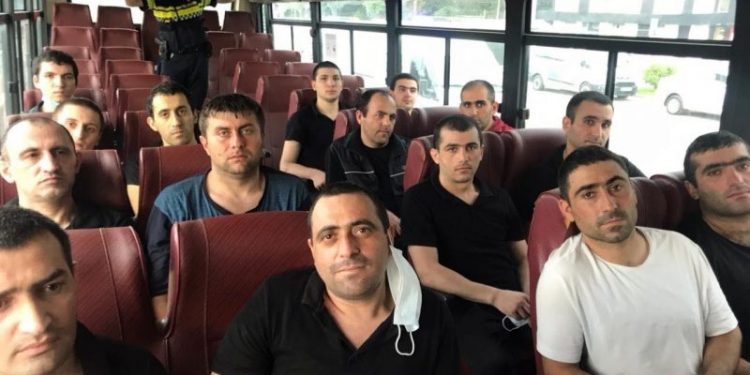 The released Armenian POWs. [Facebook page of the PM of Armenia Nikol Pashinyan]

“The sides discussed in detail a broad range of issues regarding the situation in the region. They also discussed the implementation of trilateral agreements of November 9, 2020 and January 11, 2021. In particular, the return of POWs and the launch of communications routes in the region were discussed,” the report said.

According to the press service, Pashinyan and Putin also discussed the countries’ cooperation in the economic and defense sectors. During the conversation, Pashinyan “emphasized Russia’s key role in maintaining peace and stability”. The sides also stressed “the importance of the activity of the OSCE Minsk Group co-chairs,” the press service said.

Renewed clashes between Azerbaijan and Armenia erupted on September 27, 2020, with intense battles in the disputed region of Nagorno-Karabakh. On November 9, Russian President Vladimir Putin, Azerbaijani President Ilham Aliyev and Armenia’s Prime Minister Nikol Pashinyan signed a joint statement on a complete ceasefire in Nagorno-Karabakh. According to the document, the Azerbaijani and Armenian sides remain at their positions, and a number of districts, including the Kalbajar District, come under the control of Baku. Russian peacekeepers were deployed along the engagement line and the Lachin corridor in Nagorno-Karabakh.