The current situation in Nagorno-Karabakh was the focus of a telephone conversation between Russian President Vladimir Putin and Armenian Prime Minister Nikol Pashinyan, the Kremlin press service said on Friday. 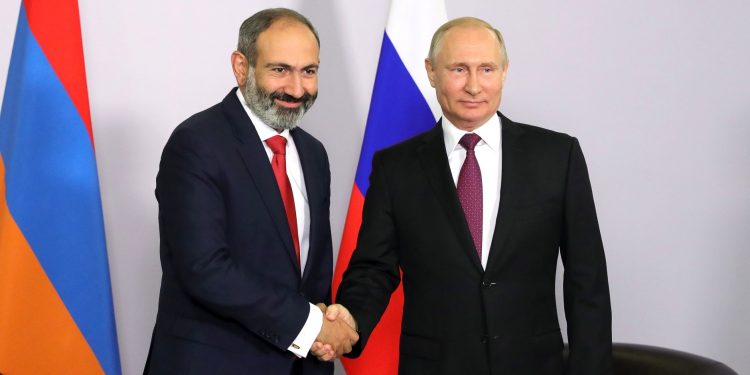 Armenian Prime Minister Nikol Pashinyan and Russian President Vladimir Putin meet May 14 in Sochi, Russia. The meeting was the first between the two men, as Armenian-Russian relations enter a fraught period. (photo: kremlin.ru)

“The sides discussed current issues of the Nagorno-Karabakh settlement in the context of the implementation of agreements committed to paper in the trilateral statements of November 9, 2020 and January 11, 2021, and the current situation at the Armenian-Azerbaijani border,” it said.

The conflict between Armenia and Azerbaijan over the highland region of Nagorno-Karabakh, a disputed territory that had been part of Azerbaijan before the Soviet Union break-up, but primarily populated by ethnic Armenians, broke out in February 1988 after the Nagorno-Karabakh Autonomous Region announced its withdrawal from the Azerbaijan Soviet Socialist Republic. In 1992-1994, tensions boiled over and exploded into large-scale military action for control over the enclave and seven adjacent territories after Azerbaijan lost control of them. Talks on the Nagorno-Karabakh settlement have been ongoing since 1992 under the OSCE Minsk Group, led by its three co-chairs – Russia, France and the United States.