Vladimir Putin and Charles Michel discussed the current situation surrounding Nagorno-Karabakh and identified as priorities the tasks to unblock economic and transport links in Ukraine. 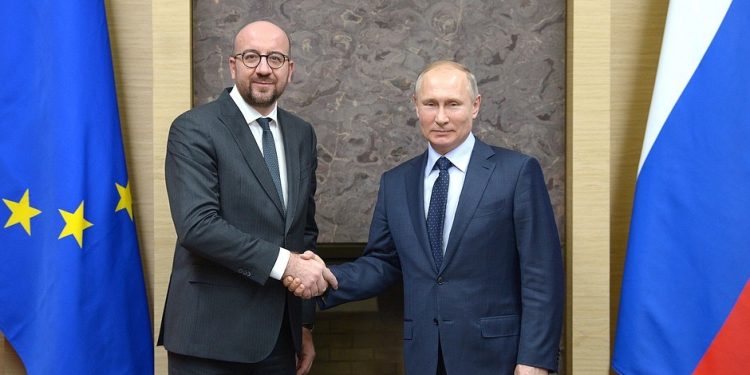 "The presidents hope all parties will reach an agreement to conclude a ceasefire and get the political process going again,". Credit: Kremlin

Russian President Vladimir Putin and European Council President Charles Michel discussed the situation in Nagorno-Karabakh and the crisis in Ukraine in a phone call on Monday, the Kremlin press service reports.

Vladimir Putin and Charles Michel “discussed the current situation surrounding Nagorno-Karabakh with a glance to the importance of continuing consistently to put into practice the statements from the leaders of Russia, Azerbaijan, and Armenia of November 9, 2020, and January 11, 2021,” the Kremlin said.

They identified as priorities the tasks to unblock economic and transport links in the region, as well as to solve humanitarian problems facing the population. Michel expressed support for the work carried out, including that of the co-chairs of the OSCE Minsk Group (Russia, the US, and France), it said.

“In exchanging opinions on the crisis in Ukraine, both sides stated that the 2015 Minsk Package of Measures remains the basis for the settlement having no alternatives,” the press service said. “The Russian president put an emphasis on the necessity of Kiev authorities’ strict compliance with all earlier reached agreements, first of all — the establishment of direct dialogue with Donetsk and Lugansk and the legal registration of a special status for Donbass,” it concluded.