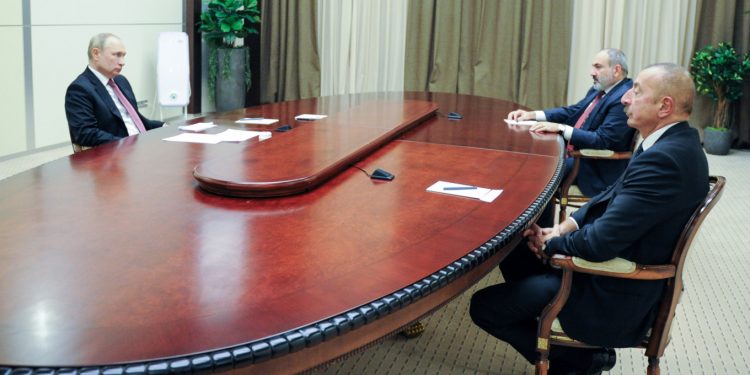 Putin gathered the leaders for a rare face-to-face meeting in the Black Sea resort of Sochi after a flare-up in fighting on the border between the two countries earlier this month.

“We were part of a united state for centuries, we have deep historical links,” Putin told the pair after holding separate talks with each of them.

“We should aim to rebuild them and nurture them in the future,” he said.

He urged the pair — who last met in January — to have more direct contacts.

“The more contacts, including direct ones, the better,” Putin said.

Putin welcomed the foes’ planned meeting in Brussels on Dec. 15, saying he had discussed the matter with European Council President Charles Michel.

The trio met less than two weeks after the worst fighting between the ex-Soviet Caucasus republics since their six-week war last year that claimed more than 6,500 lives.

Putin said it was positive that the clashes — which killed six Armenian troops and seven Azerbaijani soldiers — did not turn into “large-scale” war.

The meeting was timed to coincide with the anniversary of a Moscow-brokered ceasefire that ended last year’s conflict.

The leaders discussed demarcation issues between the two Caucasus countries as Yerevan accuses Baku’s forces of intruding into its sovereignty territory.

“We are ready to start working on the delimitation and on the peace treaty as a matter of urgency to learn how to live as neighbours again,” Aliyev said.

Pashinyan said Armenia is “also ready to start the delimitation and demarcations of borders.”

He said Putin and Russian peacekeepers “play a key role in the stabilisation of the region.”

The leaders also addressed the issue of rebuilding Soviet-era transport links between Azerbaijan and Armenia which are currently closed by a mutual blockade.

“Everyone — including Russia as a neighbour — is interested in establishing the (transport) links,” Putin said.

Baku and Ankara have pressed actively for the reopening of a historic land link uniting Azerbaijan with its exclave of Nakhichevan and further on to Turkey via Armenia’s Syunik province, as stipulated in last November’s ceasefire agreement.

Russia has supported plans to reopen land communications but shares Armenia’s rejection of the corridor.

On Friday, Azerbaijan handed over to Yerevan two Armenians — a soldier and a civilian — who were detained after last year’s ceasefire, Baku said.