On April 21, Maria Zakharova, the spokesperson for Russia’s Ministry of Foreign Affairs, denounced the European Union for allegedly seeking to inject itself into the high-level Russian-Azerbaijani-Armenian agreements on the delimitation of the state border between Azerbaijan and Armenia and the restoration of regional transport corridors. 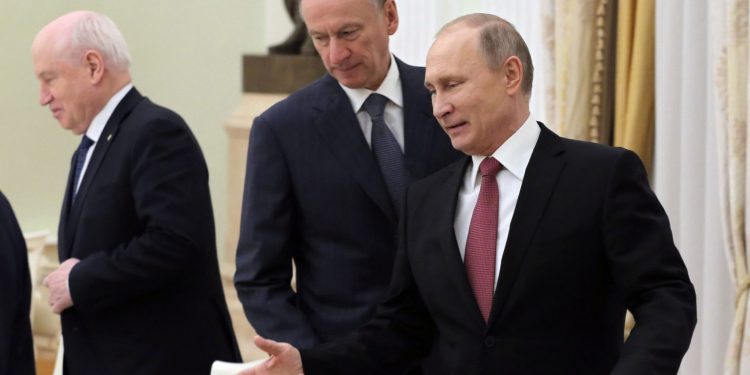 Moreover, she rebuked the “shameless attempts of Brussels to appropriate […] the agenda proposed last year by the OSCE [Organization for the Security and Cooperation in Europe] Minsk Group co-chairs (solving urgent humanitarian issues, [and the] preparation of a peace treaty between Baku and Yerevan) (RIA Novosti, April 21).

Zakharova’s outburst came on the heels of the EU’s growing role in the peace process between the two South Caucasus republics, manifested most recently in Azerbaijani President Ilham Aliyev and Armenian Prime Minister Nikol Pashinian’s bilateral summit in Brussels, on April 6 (see EDM, April 14). Her statement was likely fueled in part by Russia’s increasing dismay about the West’s refusal to cooperate with Moscow within the Minsk Group—which for nearly three decades was the leading forum for the peace process. But at the same time, the Kremlin’s preoccupation with the Ukraine war and, hence, its distraction from the Azerbaijani-Armenian conflict over Karabakh had surely enabled an opening for Brussels to take a more active role (see EDM, April 21).

Against this background, Prime Minister Pashinian met with Russia’s President Vladimir Putin in Moscow, on April 19, during an official visit dedicated to the 30th anniversary of the establishment of diplomatic relations between the two countries. Neither the leaders’ remarks in front of the cameras nor their joint statement released following the meeting mentioned any novelty regarding the Karabakh peace process (Primeminister.am [1][2], April 19).

Nevertheless, the visit was seen by many observers in Baku as Moscow’s attempt to undermine the EU-arbitrated peace efforts (Day.az, May 7). This view was reinforced a month later, when Yerevan released a six-article response (Civilnet.am, May 14) to Baku’s earlier five-article proposal for how a peace treaty should be structured (Mfa.gov.az, March 14). The Armenian version specifically contained renewed demands for Karabakh’s separate status, which some Azerbaijani commentators interpreted as the outcome of Russia’s interference and domestic pressure from the Russia-aligned Armenian opposition (see EDM, May 11).

The Azerbaijani government has, consistently since the end of 2020 Second Karabakh War, refused to confer any special status on the Armenian-populated Karabakh territories (President.az, November 10, 2020). Baku, therefore, expressly contradicted Armenian officials who earlier stated that there was “mutual understanding” on the Armenian proposals between Baku and Yerevan (Armenpress.am, May 5; Haqqin.az, May 7; Civilnet.am, May 10).

Although Pashinian had raised the issue of Karabakh’s status even before his April 19 Moscow visit (Armenpress.am, April 7), a series of developments since then substantiate the assertions that Armenia’s current obstinate position is the result of the Kremlin’s dissatisfaction with how the peace talks have been shaping up. Specifically, Moscow has telegraphed a series of resentful statements directed against both Armenia and Azerbaijan, and it has stepped up efforts to recover its dominant intermediary position in the Baku-Yerevan peace process.

On April 27, Nikolai Patrushev, the secretary of Russia’s Security Council, accused Armenia and Azerbaijan, along with Georgia, Ukraine, Uzbekistan and Kazakhstan, of hosting bio-laboratories of “the United States and its satellites” for military purposes, under the guise of scientific research (TASS, April 27). Moscow had repeatedly made similar claims for years, and they have notably constituted a part of the Russian narrative to justify its re-invasion of Ukraine on February 24.

The State Security Service of Azerbaijan denied Patrushev’s accusations (Azernews.az, May 11). Whereas Yerevan released no official objection. Back in 2021, Armenia signed a Memorandum of Understanding on Ensuring Biological Safety with Russia; and during Pashinian’s April visit to Moscow, the Armenian side renewed its commitment not to allow its territories to be used by third countries for the purpose of carrying out activities against Russia in the field of biosafety (TASS, April 20).

In parallel, Moscow has sought to re-activate its engagement in Baku and Yerevan’s peace negotiations. Over the last few weeks, since the Pashinian-Aliyev Brussels summit, Russia initiated a trilateral (Russia-Armenia-Azerbaijan) foreign ministerial meeting, sought to relaunch the working group of deputy prime ministers that was established in January 2021, and declared plans to convene a second meeting of the 3+3 (Armenia, Azerbaijan, Georgia, Russia, Turkey, Iran) South Caucasus regional cooperation platform (Armenpress.am, April 25).

Toward this end (and due to the refusal of the United States and France to work with Russia within the Minsk Group), Moscow appointed Igor Khovaev, the former Russian Minsk Group co-chair, its special envoy for the normalization of relations between Armenia and Azerbaijan (Trend.az, April 14).

The Russia-mediated meeting of the three countries’ foreign ministers (see above) was held in Dushanbe, Tajikistan’s capital, on May 12. The outcome of this tripartite ministerial included inter alia the announcement of two working groups—one on unblocking transport connections between Armenia and Azerbaijan and the other on delimiting the countries’ border. Both were supposed to convene on May 16–17, in Moscow (Civilnet.am, May 12).

Immediately, the Azerbaijani news outlet Haqqin.az, in reference to its own sources, stated that Baku had not given its consent to discussing the issue of transportation corridors nor border security during the May 12 Dushanbe meeting (Haqqin.az, May 12, 13). The outlet did not, however, say definitively whether the planned working group meeting itself would be held. Eventually, the date came and went, with no such meeting taking place. At that point, the office of Armenian Deputy Prime Minister Mher Grigorian announced that the working groups would sit down sometime later this month, with the exact day still to be decided (Aysor.am, May 17).

The fact that the trilateral working group meeting was not held, contrary to the announcement from the Armenian foreign minister, signifies two things. First, there is still a lack of mutual understanding between Baku and Yerevan; and second, Russia’s role in the mediation process in many ways remains ineffective. It is worth recalling that the last meeting of the trilateral working group took place in late 2021, and the three sides failed to declare any tangible progress (see EDM, December 1, 2021). Thus, although Moscow complains about the EU “hijacking” the mediating role in the Armenia-Azerbaijan peace process, it appears to have limited scope to stave this off altogether.